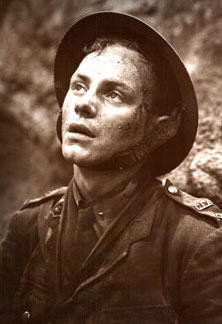 Lost in a colonial limbo


Famously eccentric, Canadian classical pianist Glenn Gould is celebrated as one of the great musical talents of the 20th century. Born on this day (September 25) in 1932, his prodigious output included books, broadcasts, recordings, and the score for director Robin Phillips’s 1983 film The Wars.

THE WARS. Written by Timothy Findley, based on his 1977 novel. Music by Glenn Gould. Directed by Robin Phillips. Running time: 120 minutes. 14 years limited admittance with the B.C. Classifier’s warning: occasional violence, nudity, suggestive scenes and very coarse language. ROBIN PHILLIPS DOES NOT lack ambition. According to Chatelaine magazine’s Gina Mallett, The Wars came about because of the former Stratford Festival artistic director’s "dream to create an English-Canadian movie presence to rival that of Australia’s recent emergence.”
He certainly had lots of good examples to choose from, among them Bruce Beresford, Fred Schepisi or either of Oz's two George Millers. Phillips, unfortunately, is a product of the hothouse world of subsidized culture, and his Australian idol seems to be Peter Weir,  the most self-indulgent of the antipodean cineastes.
The Wars is Phillips’s Gallipoli, a precious, desperately meaningful drama about maternal madness and the terrible waste of war. To make his screen directorial debut suitably impressive, he brings together a selection of officially sanctioned artistic talents in a package designed to set hearts aflutter among the federal government’s grants guardians.
Asked to adapt his own Governor General’s Award-winning 1977 novel was Timothy Findley, who has been a writer-in-residence at both the University of Toronto and Ottawa’s National Arts Centre. Only a churl would publicly recall that Findley's single previous screenplay, 1968’s Don’t Let the Angels Fall, remains one of the great Canadian cinematic turkeys.
Music was provided by the late Glenn Gould, one of our certified geniuses. Although he is credited as a composer, his most obvious contribution to the project seems to have been the stringing together of a number of other people’s tunes.
When Nielsen-Ferns, one of CBC-TV’s favourite independent suppliers, joined with the National Film Board to handle production duties, the Canadian Film Development Corporation, Famous Players and Torstar, the Toronto Star newspaper's corporate parent, all shook their money trees to find financing for Phillips’s little epic.
The package is utterly blue ribbon and so very correct, culturally speaking, that it almost goes without saying that the result is a dull-witted disaster. Phillips, lacking Weir’s ability to suggest mystic dimensions in his most preposterous posturings, ends up offering audiences a film that is merely pretentious.
It is the story of Lieutenant Robert Ross (Brent Carver), a son of wealth commissioned into His Majesty’s service circa 1915. He is recalled for having done something “terrible and brave.”
As it turns out, his deed is more self-righteous and nutty, qualities of very different moral and dramatic weight.
Relentlessly grim and overwrought, The Wars never establishes any sense of place. Resident in a vaguely British colonial limbo, the Ross clan inhabits a Toronto mansion that might be mistaken for the local looney bin. Dorothy (Martha Henry), its matriarch, sets the tone with utterances such as "we are all cut off with a knife at birth and left to the mercy of strangers.”
Robert’s discovery that war is an extension of the familial insanity tips him over the edge into a moment of lucidity, during which he disgraces himself heroically. Had Phillips managed to bring this to the screen with any semblance of wit, style or grace, The Wars would  be something more than another dreary example of artistic public works.

Afterword:  My less-than-enthusiastic review notwithstanding, The Wars did not lack for critical acclaim. It was nominated for seven Genie Awards, including best picture (won by a biographical drama, The Terry Fox Story), and best screenplay (won by the seasonal comedy A Christmas Story). On the plus side, Martha Henry and Jackie Burroughs did take home the best actress and supporting actress prizes. Director Robin Phillips was not among the nominees, though, and The Wars remains his single theatrical feature directing credit. When he died in 2015, the picture was not even mentioned in any of the major newspaper obituaries that marked his passing. What was mentioned was the undisputed mark he left on live theatre in both Canada and the U.K. His tenure as artistic director of Ontario’s Stratford Festival (1975-1980) was controversial, transitional and, in many of the accounts, a “golden age” for its Shakespearean acting company.

See also: Before his move to Canada, Robin Phillips had a decade-long acting career in British film and television. Among his movie appearances was a role in the 1972 anthology feature Tales from the Crypt.  For an earlier take on Canada’s part in the Great War, read my review of 1928’s silent epic Carry On Sergeant!