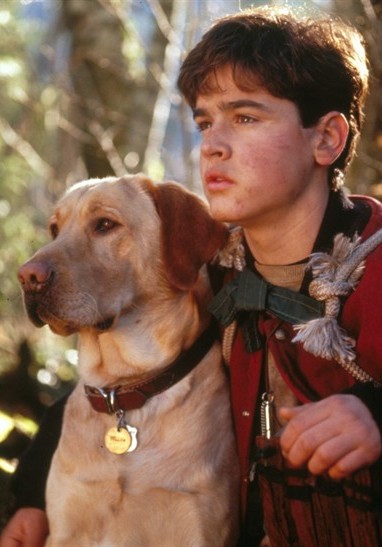 Yellow Dog (Dakotah) and his best friend Angus McCormick (Jesse Bradford) work together to survive in the wilderness in writer-director Phillip Borsos’s 1995 family feature Far From Home: The Adventures of Yellow Dog.


Best friends survive in the wilderness


Director Phillip Borsos launched his feature filmmaking career with a great northwestern, the 1982 Canadian cinema classic The Grey Fox. Born on this day (May 5) in 1953, Borsos returned to British Columbia to make his last movie, 1995’s Far From Home: The Adventures of Yellow Dog.

FAR FROM HOME: THE ADVENTURES OF YELLOW DOG. Music by John Scott. Written and directed by Phillip Borsos. Running time: 81 minutes. General rated with the B.C. Classifier’s warning: may frighten young children. THE GOOD NEWS IS that Far from Home: The Adventures of Yellow Dog is no Old Yeller. Parents can take their wee ones, secure in the knowledge that there'll be no tears shed at the end because a boy has had to shoot his faithful dog.
Unfortunately, neither is it a Grey Fox. Designed for family audiences, writer-director Phil Borsos's wilderness survival drama is low-key to the point of being inert.
Filmed on Mayne Island and in various B.C. provincial parks, it is the story of 14-year-old Angus McCormick (Jesse Bradford), a boy befriended by a stray Labrador retriever. The dog, named Yellow, quickly wins over Mom (Mimi Rogers) and Dad (Bruce Davison) to become part of their rural family.
The "adventure" begins when, during a voyage up the coast, the pair are swept overboard. A capable kid, Angus knows that it's only a matter of time before a search and rescue team finds them.
After nine days of waiting about on the shore, Angus decides that he can’t be more than 25 or 30 kilometres from the local lighthouse. Together with Yellow, he sets out on foot for home.
Borsos’s narrative approach is spare, naturalistic and episodic. Though Angus covers a lot of ground, he never seems to get anywhere and, what’s worse, is forever getting into predicaments that are left unresolved.
As a result, parents may have to answer some of the questions the film ignores. For example, on his tenth night in the wild, Angus is menaced by wolves.
Lightning flashes, thunder rumbles and Yellow has what appears to be a growling match with the pack leader. Even so, not much actually happens.
"Mommy, what happened to the wolves? Where did they go?"
On Day 17, Angus tumbles down an embankment. In the next scene, his arm is in a makeshift sling.
"Daddy, what happened to his arm. Where did he get that thing on his arm?"
On Day 19, the hungry pair encounter a lynx that has just killed a deer. Yellow seems willing to fight the feline for it, but Angus knows that's not a good idea.
"Where'd the cat go, mommy? What happened?"
I can tell you that the scenery is nice, the music is unexciting and the performances are all adequate. What I can't tell you is what happened to that darn cat.

Afterword: In the interests of full disclosure, I should admit that I am a cat person. Reading the above review, I realize that it had a feline aloofness that set it apart from a critical consensus that found Far From Home a fine film. The Washington Post’s William F. Powers placed it among “those classics of dog cinema” Old Yeller and Sounder, and he looked forward to “more Yellow Dog adventures to come.” It was a fair assumption, given that writer-director Phillip Borsos was just 41 at the time of the picture's release.
Born in Hobart, Australia, Borsos was 5 when his family relocated to British Columbia. By 1980, he had three Canadian Film Awards on his trophy shelf — for his Vancouver-made documentaries Cooperage (1976), Spartree (1977) and Nails (1979) — and an Oscar nomination for Nails. In 1982, he made the breakthrough to feature filmmaking with The Grey Fox, the story of Canada's first train robber. Nominated for 13 Genie Awards, it won seven, including the best picture and director prizes. Hollywood recognized an accomplished talent, and his second feature was made for U.S. distributor Orion Pictures. A disappointing American newspaper thriller, The Mean Season (1985) was shot in Miami.
Returning to Canada, Borsos co-wrote and directed One Magic Christmas (1985), filmed in Toronto for Walt Disney Pictures. It, too, failed to fulfil the promise of Borsos's beautifully nuanced first feature. Changing direction, he committed himself to another epic Canadian drama, the story of Dr. Norman Bethune, the battlefield surgeon who became an enduring hero of China's Communist revolution. Years of problems ensued, with the result that 1990's Bethune: The Making of a Hero (with Donald Sutherland and Helen Mirren) was not the film that Borsos set out to make.
His final feature, 1995’s Far from Home: The Adventures of Yellow Dog, was shot on and around his farm on Mayne Island, B.C. That year, it was reported that he was suffering from leukemia. His death in early 1995, just 20 days after the film's release, was a genuine loss to Canada's cinema.