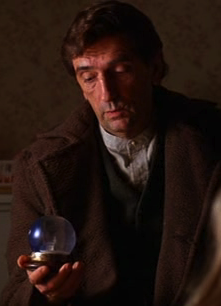 An angel named Gideon (Harry Dean Stanton) is Santa's enforcer, ensuring that even the needy get into the Christmas spirit.

Christmas cheer, or else


On the fifth day before Christmas, my TV gave to me . . . Mindful of the high standard set by Prancer, today's (Dec. 20) Reeling Back looks at Disney's Ontario-made One Magic Christmas (1985).

Wednesday, November 27, 1985
ONE MAGIC CHRISTMAS. Written by Thomas Meehan. Music by Michael Conway Baker. Directed by Phillip Borsos. Running time: 87 minutes. Rated as General entertainment. GINNIE GRAINGER (MARY Steenburgen) is out of sorts. 'Tis the season to be jolly, but this Medford mom is acting more like a grinch.
It's not that she doesn't have a good excuse. Jack (Gary Basaraba), her irritatingly cheerful husband, has been without work for six months, and Ginnie could lose her own supermarket cashier's job at any time.
They've already lost their suburban home. Their car, a sedan built in the late 1950s, appears to be on its last legs. Ginnie does not need to hear her six-year-old daughter Abbie (Elizabeth Harnois) talking about her encounter with a "Christmas angel'' named Gideon.
Ginnie doesn't know it, but her troubles have just begun. Gideon (Harry Dean Stanton), you see, is real.
"My job,'' he tells wide-eyed Abbie, "is to help one person who's feeling down get into the Christmas spirit." Or else.
Never mind that Ginnie's actions are perfectly reasonable given her circumstances. Gideon is on a mission from St. Nick and, if Abbie's mom doesn't shape up, he has ways of making her count her meagre blessings.
Like those spooks in A Christmas Carol, Gideon offers visions of the future. Dire, horrendous consequences (including the violent loss of loved ones) await those who refuse to utter the required seasonal greeting.
'Tis the season to be suspicious of films with cloying titles like One Magic Christmas. Such films seem manufactured to recall feelings from that remembered long ago when the Yuletide was a time of families and faith, not crass commercialism.
Unfortunately, these feelings lose a lot in contemporary translation. "Christmas spirit" is a quality that Thomas Meehan's screenplay never bothers to describe or define.
Indeed, this is a film that scrupulously avoids any reference to the annual celebration's religious significance or spiritual meaning. In their place, it offers angels as agents for a "magic'' Santa Claus, and the North Pole as a happy hereafter where good folk go when they die.
The "Christmas spirit" that Ginnie lacks is no more than softcore nice-Nellyism, a seasonal variation on happy faces and "have-a-nice-day'' wishes. If you don't have it, though, Santa's own enforcer will see to it that your misery gets really miserable.
Despite its dumb premise, this new Disney Pictures release manages a number of genuinely affecting moments. Under Phillip (The Grey Fox) Borsos's direction, actress Harnois gives a performance designed to make Steven Spielberg envious.
Borsos's picture is at its best when it focuses on this wonderfully talented child. Abbie's visit to St. Nicholas (Jan Rubes) in his North Pole headquarters is a beautifully realized fantasy, the sequence that comes closest to living up to the picture's promising title.
The reasons cooked up to make her visit necessary are less satisfying.  Better not pout, says One Magic Christmas. This Santa has claws that he's not afraid to use.

Afterword: I really wanted to love One Magic Christmas. Though the screenplay was credited to frequent Mel Brooks collaborator Thomas Meehan, director Phillip Borsos had solid British Columbia roots. An Oscar nominee at 26 for his Vancouver-made documentary short subject Nails (1979), he'd based his first feature film, 1982's The Grey Fox, on the story of Canada's first train robber. Hollywood recognized an accomplished talent, and his second feature was a disappointing American newspaper thriller, The Mean Season (1985), filmed in Miami. One Magic Christmas followed and it, too, failed to fulfil the promise of Borsos's beautifully nuanced first feature. Changing direction, he then committed himself to another epic Canadian drama, the story of Dr. Norman Bethune, the battlefield surgeon who became an enduring hero of China's Communist revolution. Years of problems ensued, with the result that 1990's Bethune: The Making of a Hero (with Donald Sutherland and Helen Mirren) was not the film that Borsos set out to make. His final feature, 1994's Far from Home: The Adventures of Yellow Dog, was shot on and around his farm on Mayne Island, B.C. That year, it was reported that he was suffering from leukemia. His death in early 1995, at the age of 41, was a genuine loss to Canada's cinema.
Christmas Countdown:  Mixed Nuts (1994); Black Christmas (1974); Home Alone (1990); The Ref (1994); Santa Claus - The Movie (1985); Prancer (1989);  Nobody's Fool (1994); Gremlins (1984); Scrooged (1988); A Christmas Story (1983); Die Hard (1988).