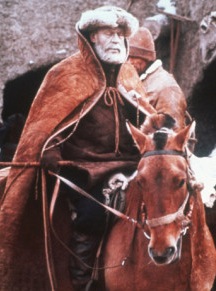 Having divided his kingdom, the tragic monarch (Paul Scofield) sets off to enjoy his retirement in director Peter Brook's 1971 adaptation of King Lear.

Mad about the Bard


Born on this day (April 23) in 1564, the man from Stratford is ghost of honour this morning at Bill's Birthday Breakfast, a fundraiser being held for Vancouver's annual Bard on the Beach Shakespeare Festival. Though 2015's first performance isn't until June 4, tickets have been on sale since April 8. Founded in 1990, its first season attracted some 6,000 Bard-starved Vancouverites to a tent in Vanier Park, where culture came with a view of English Bay and the North Shore Mountains. Its four-week run of A Midsummer Night's Dream was the beginning of an annual tradition that this year celebrates its 26th anniversary. In that time, they've built a bigger tent, added a second stage and expanded the schedule to offer four productions a year. To date, the programs have included 35 of the 38 plays in the acknowledged canon. (Completionists hope to see Coriolanus, Henry VIII and Two Noble Kinsmen in future seasons.) This season, the Bard company will offer a Roaring Twenties interpretation of Love's Labour's Lost and the world premiere of Shakespeare's Rebel, a drama not by but about William Shakespeare, on the intimate Howard Family stage. The Main Stage productions will be a steampunk-inspired The Comedy of Errors and a traditional King Lear. The latter tragedy is a favourite of Britain's Peter Brook, who directed a 1971 screen version of King Lear.

Monday, July 24, 1972.
KING LEAR. Adapted from the play by William Shakespeare. Music not credited. Written and directed by Peter Brook. Running time: 137 minutes. General entertaintment. PETER BROOK'S SPECIALTY IS madness. Under his direction, the Royal Shakespeare Company staged The Persecution and Assassination of Jean-Paul Marat as Performed by the Inmates of the Asylum of Charenton Under the Direction of the Marquis de Sade (Marat/Sade) and, under his direction again, Peter Weiss's play was transferred to film.
Brook is expert in the look of madness. He takes less interest in how people get that way, with the result that his staging of King Lear is a streamlined dash to the third act, and the old king's wanderings on the stormy heath.
In his haste to get through it, the English Shakespearean has eliminated some scenes, severely cut others and, in some cases, altered the action to speed things up. Where his alterations threaten serious damage to the continuity, Brook has inserted title cards.
"Gloucester's Castle," says one. "Edmund plots against Edgar," says another.
What Brook is trying to get away with is "Excerpts from King Lear," the kind of stripped-model staging high-school students are expected to dutifully sit through in the hope that it will whet their appetites for the text and stimulate some discussion.
The director, assuming that his audience is familiar with the original text, chooses to underscore the highlights.
Like Grigori Kozintsev, the Soviet director who brought his version of King Lear  to last year's [1971] World Shakespeare Congress [on the campus of the University of B.C.] , Brook has emphasized the harshness of the land and the cold climate. Coldness, in fact, permeates his whole production, leaving its characters chilled to the point of lifelessness.
His film, shot in Denmark in black and white, opens with the sound of a slamming door. Lear (Paul Scofield), looking more rundown than regal, intones haltingly: "Know . . . that we . . . have divided . . . "
The camera concentrates on his face, a point of dull light in a black void, as he drawls out his lines, his recitation more that of a man on a sick bed than a still-powerful leader delegating authority.
His daughters are no better. Both Goneril (Irene Worth) and Regan (Susan Engel) deliver their protestations of love as if they were reading from the phone book. Cordelia (Anne-Lise Gabold), in her turn, radiates defiance rather than a sincerely troubled affection.
Not only does the scene lower the film's temperature, but it also chills the tragic feeling. Surely Lear cannot believe these stiff, overblown words of love.
Surely he does not mean to give away his kingdom to these icy women. Surely Kent (Tom Fleming) cannot be so fiercely loyal to this pathetic old man.
In the Kozintsev version, Lear was a true monarch, made mad by the disintegration of his power and the collapse of his close-knit family. Brook not only compresses the time, but reduces the height of Lear's fall.
Scofield's king begins on the brink and scrambles half-heartedly over the edge, his madness as emotionally unmoving as his sanity.
In transferring this particular stage production to film, Brook was unable to make the motion-picture medium work for him. Lear's raving upon the heath, the play's central crisis, is all but lost in an uninspired (but visually distracting) display of rapid cutting, altered angles, stroboscopic lighting and a wrath-of-God storm.
Compared to the theatre, the motion picture is a young medium. If only, theatre buffs are fond of saying, the camera had been around to record some of the all-time great performances.
In recent years, of course, it has. And the results form a uniformly embarrassing pattern. Plays conceived originally for the stage — be they a Richard Burton Hamlet or a Paul Scofield Lear — just don't don't work well on the big screen.
The same plays, though, when conceived specifically for the camera's eye — Kozintsev's Hamlet (1964) or his Lear, Franco Zeffirelli's The Taming of the Shrew (1967) or his Romeo and Juliet (1968), Roman Polanski's Macbeth (1971)— place the emphasis on the director rather than the central players.
More often than not, they do well by the Bard, with the audience as the ultimate beneficiary.
Such, unfortunately, is not the case with Brook's film. His cool, truncated tragedy serves Shakespeare badly. It serves the motion picture not at all.

Afterword: There have been at least a dozen film adaptations of King Lear, including two in the days of silent cinema. The sound era's first production was actually staged for TV, a 1953 live broadcast that was part of the CBS Omnibus series. Orson Welles played the title role in a slimmed-down 73-minute version. Then came 1971's theatrical double feature, the Peter Brook film discussed above and the great Grigori Kozintsev interpretation. The five classic stagings of the play that followed were all made for TV, including a 1974 PBS Great Performances production with James Earl Jones, a 1982 BBC Classic Shakespeare broadcast with Michael Hordern, a 1983 Granada TV special with Laurence Olivier, a 1998 BBC Performance episode with Ian Holm and a 2008 Channel Four record of Ian McKellen's performance. There are, of course, several non-canonical adaptations, pictures such as director Akira Kurosawa's medieval Japanese epic Ran (1985), Jean Luc Godard's epically awful King Lear: Fear and Loathing (1987), Jocelyn Moorhouse's intense farm family drama A Thousand Acres (1997), Kristian Levring's desert survival drama The King Is Alive (2000), Don Boyd's modern Liverpool gangland drama My Kingdom (2001) and Ull Edel's western The King of Texas (2002). Currently in "turnaround" (biz talk for "not going to happen any time soon") are previously announced movie productions of King Lear with Anthony Hopkins (2009) and Al Pacino (2012). Canada has since risen to the challenge. Earlier this year, Ontario's Stratford Festival inaugurated its HD series (a project to preserve its best productions for the big theatre screen) with the February release of a 157-minute King Lear starring Colm Feore.