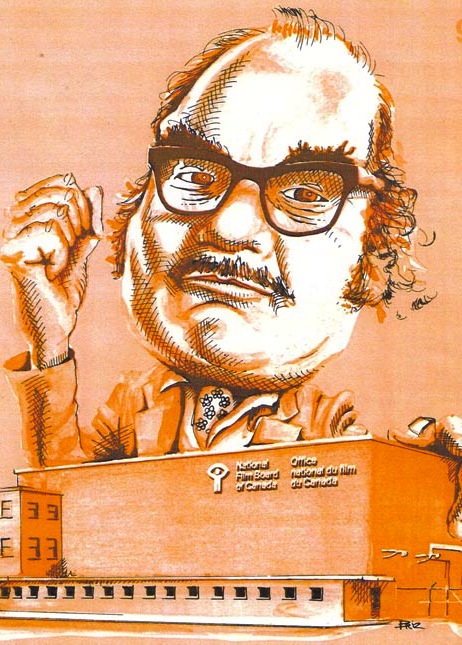 Cinema Canada magazine featured National Film Board of Canada chairman SYDNEY NEWMAN on the cover of its Aug.-Sep. 1974 issue.


If people remember anything about pioneer broadcaster Sydney Newman, it's that he created the iconic BBC science-fiction series Doctor Who. On Canada's Film Day (April 20) for 2016, Reeling Back recalls the Newman who represented our national cinema in China in 1974.


THE MOMENT WAS HISTORIC. Twenty-flve years ago today [October 1, 1949], Mao Tse-tung stood before a cheering throng in Peking and proclaimed the founding of the People's Republic of China.
This week his nation is celebrating its Silver Anniversary. Invited to the party are some of Canada's top media representatives, a group that includes Canadian Broadcasting Corporation president Laurent Picard,  Canadian Press president Ross Munro, Vancouver Province publisher Paddy Sherman and the federal government's film commissioner Sydney Newman.
As befits such an occasion, the National Film Board's chairman has a gift for The Chairman. A very special gift.
"In 1946, Grant McLean got into Yenan," Newman told me last week, shortly before boarding his plane for Peking. Yenan was, at the time, the central training base for the Chinese Communist forces. McLean, an NFB director, was there long enough to record an hour of priceless historical footage, a series of shots that included revolutionary leaders Mao and Chou En-lai.
Some of his footage was used in the 1964 NFB documentary Bethune. Most of it remained in storage. It re-emerged when the current NFB chief received his invitation to the Peking celebrations.
"We've assembled seven minutes of the choicest material into a special film," he said, adding that McLean wasn't the only man to participate in the making of modern Chinese cinema history.
"Norman McLaren was also there in 1949."
McLaren, Canada's internationally-known animation genius, was in China teaching audio-visual technique when Mao's revolutionary forces occupied the city, Newman said. Recognized as a great talent even then, McLaren was allowed to stay.
"He taught there for 12 more months," Newman told me.
Although he had no proper photographic equipment to work with, McLaren turned the situation to advantage. He taught his students how to make movies completely by hand,  scratching abstract patterns and designs directly on to the film stock.
When he returned to Canada, he brought a number of his students' exquisitely etched movies with him. An important part of the new China's cinematic heritage, they are also included in Newman's gift package.
"When I saw them, I told him, 'Norman, these are too beautiful for you to give back'. He told me very simply, 'Sydney, these belong to the people of China'."
In addition to these remembrances of China's recent history and heritage, Newman will offer his hosts a glimpse of a contemporary Canadian production. He took with him copies of director Tony Ianzelo's 1972 short Here Is Canada in a Mandarin-dubbed version, and director Ron Tunis's 1972 short Le Vent (The Wind), a delightful animated cartoon that needs no translation.
Although his visit will give Newman the opportunity to  look over a potential market — with 600 million potential customers — for the Film Board's product, "no hard business sessions have been planned," he said. "I do want to meet with their senior film people, though."
His departure meant that he had to miss the Montreal premiere of one of the NFB's most heavily publicized ventures to date, the feature film Why Rock the Boat? By the time he returns next week, director John Howe's satirical comedy will be on view in major centres all across the country.
It opens here at the Varsity Theatre on October 11 [1974]. Nor is it the only English-language feature that the NFB has in store for us. Although Newman has no firm release dates to report, he confirmed to me that at least two more theatrical features are in the final editing stages.
One, called Cold Journey, is a stark drama focusing on the problem of Canadian Indians. The other, called Conflict Comedy, is an ambitious musical, a film that blends together live action and animated sequences.
On the morning of his departure, though, Newman had a more pressing concern.  An honoured guest of the People's Republic, he was busy polishing his conversational Chinese.

Afterword: Toronto-born Sydney Newman is one more example of a prophet not without honour save in his own country. Summarizing his achievements, Newman's Wikipedia biography draws its laudatory quotes from foreign sources. "The website of the [U.S.] Museum of Broadcast Communications describes Newman as 'the most significant agent in the development of British television drama'," Wikipedia tells us. "Shortly after his death, his obituary in The [U.K.] Guardian newspaper declared that 'For ten brief but glorious years, Sydney Newman . . . was the most important impresario in Britain . . . His death marks not just the end of an era but the laying to rest of a whole philosophy of popular art'."
Today, he is remembered as the creator of Doctor Who (1963), often cited as the longest-running science-fiction series in television history. The subject did not come up during my 1974 interview with the 57-year-old cultural diplomat on the eve of his trip to Beijing (then known as Peking). Newman had been appointed Government Film Commissioner (which made him chairman of the NFB) in August, 1970, just two months before Canada officially recognized the People's Republic of China. During his five years in the office, the increasingly cordial relations between the two nations led to the production of a number of films, including director Tony Ianzelo's eye-opening North China Commune (1980).
A controversial figure during his time at the NFB — he was unpopular at the Board's Montreal headquarters for his lack of French-language skills — Newman attempted to take the organization in new directions, including greater involvement in fictional feature filmmaking. He came into conflict with many of the Board's francophone creators, who were understandably caught up in the emotions that followed from 1970's October crisis (examined in Robin Spry's 1974 documentary feature Action: The October Crisis of 1970)  His tenure was not renewed and, in 1975, he became a Special Advisor on Film to Canada's Secretary of State, followed by an appointment as Chief Creative Consultant to the Canadian Film Development Corporation. Honoured, if underused, he died in Toronto in 1997 at the age of 80.

Addendum: Director Martin Defalco's Cold Journey, the feature drama mentioned in the above interview, was released to theatres in 1975. It starred Johnny Yesno as a troubled First Nations youth in Saskatchewan, and featured Chief Dan George. Director Mort Ransen's Conflict Comedy had a more troubled production history. Retitled Running Time, it starred Jackie Burroughs as an elderly woman navigating a relationship with a much younger man. It was finally seen on CBC-TV in 1978.