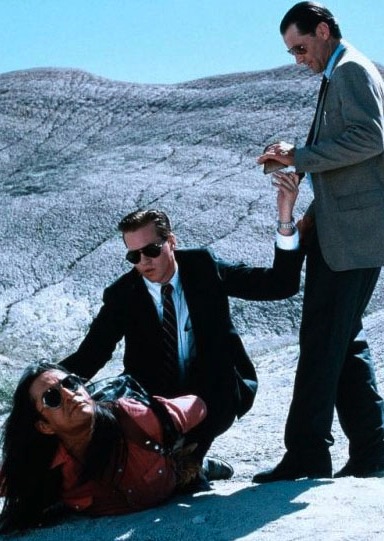 
Investigating a third world in America


On this day (February 27) in 1973, some 200 members of the American Indian Movement (AIM) occupied the town of Wounded Knee on South Dakota's Pine Ridge Reservation to protest corruption in the local tribal administration. The 71-day siege that followed did not end well for the activists. At least two died in firefights with the authorities, and AIM's complaints went unresolved. In the incident's aftermath, violence increased on the reservation. In June 1975, two FBI agents were shot to death. Suspicion fell upon AIM member Leonard Peltier and, in what many say was a miscarriage of justice, he was tried and convicted of their murders. Three weeks ago (February 7), gatherings were held in cities in Europe and the U.S. to mark the 40th anniversary of his imprisonment. Considered a political prisoner, Peltier's case has attracted the support of such high-profile figures as Nelson Mandela and Desmond Tutu. Today (February 27), a coalition of international student groups are observing a "Day of Action" to demand that Barrack Obama grant clemency to the ailing 71-year-old and release him from the federal maximum security penitentiary system. Progressive musicians have celebrated Peltier in their work since the late 1980s and, in 1992, Robert Redford collaborated with director Michael Apted on the production of the documentary Incident at Oglala. Apted's doc was meant a companion piece to his fictional treatment of the tale in the 1992 mystery thriller Thunderheart.

Monday, April 6, 1992.
THUNDERHEART. Written by John Fusco. Music by James Horner. Directed by Michael Apted. Running time: 118 minutes. Rated Mature with the B.C. Classifier's warning: some violence and very coarse language. IT'S PRETTY WELL unanimous. Graham Greene is terrific.
An Oscar nominee for his performance as Kicking Bird in 1990's Dances With Wolves, Greene has another outstanding, scene-stealing supporting role in Thunderheart. Everywhere you look, the Ontario-born actor is receiving well-deserved praise.
As a result, his new movie is in danger of being mistaken for Wolves II. A modern-dress suspense thriller, Thunderheart is its own achievement, a film as immediate and relevant as a statement from Canada's Assembly of First Nations.
Recalling events that took place on South Dakota's Pine Ridge Reservation in the 1970s, screenwriter John (Crossroads) Fusco has created the character of Ray Lavoi (Val Kilmer), an FBI special agent who is one-quarter Oglala Sioux.
Though he has never had any interest in his Native American heritage, he is selected by the bureau for a "sensitive operations" assignment following a murder on the Bear Creek Reservation.
Teamed with the Denver office's "legendary" Frank Coutelle (Sam Shepard), young Lavoi has three days to find a suspect and close the case. Complicating his life is a tribal police officer, the local Sherlock Holmes whose compelling evidence does not fit Lavoi's neat conclusions.
Thunderheart opens with a series of images that evoke both Walt Disney and Sam Peckinpah. It begins with Fantasia-like shadows of plains Indians dancing beneath a full moon.
Ghost-like, they melt in the sunrise. Suddenly, the screen is filled with the silhouette of a running man whose body flies apart in a hail of gunfire.
Director Michael Apted's work here bears comparison to Costa-Gavras's recent political thriller Betrayed (1988), the story of an FBI agent who infiltrates a Midwestern white supremacist organization.
An action-adventure with a social conscience, Thunderheart also recalls actor Greene's last Canadian feature, director Richard Bugajski's Clearcut (1991). In all three pictures, anger, violence and deep-seated tribal loyalties lie close to the surface.
Then, too, there is Apted's own previous cop show, 1983's Gorky Park. British-born, he has a documentarist' s keen eye for the racial and ideological tensions that rend the social fabric of polyglot nations like the U.S. and the former U.S.S.R.
Levoi arrives on the scene to discover that the Badlands murder of Leo Fast Elk (Allan R.J. Joseph) is part of a deeper conflict between local tribal president Jack Milton (Fred Ward) and the reform-minded Aboriginal Rights Movement (ARM).
"It's the third world slap dab in the middle of America," Agent Coutelle tells us. Apted, the outsider, is implicitly comparing the U.S. government's handling of its own native peoples to its support of oppressive regimes in Central America.
Here, FBI equals CIA, a theme that he subtly develops as the story unfolds. Made more explicit is Levoi's own spiritual journey.
During the investigation he begins to feel the tug of his blood. Helping him along are tribal elder Sam Reaches (Chief Ted Thin Elk), militant schoolteacher Maggie Eagle Bear (Sheila Tousey) and, of course, Crow Horse.
"They're a proud people," Coutelle allows. "They're also a conquered people."
Using the mystery format, Apted's Thunderheart offers a timely look at the consequences of both pride and conquest.

Afterword: Thunderheart represented a moment when British-born director Michael Apted's personal involvement with fiction and non-fiction cinema intersected. Four months after this mystery-thriller inspired by events on the Pine Ridge Reservation was released, an Apted-directed documentary, Incident at Oglala: The Leonard Peltier Story, arrived in Vancouver. The doc, narrated by American Indian Movement supporter Robert Redford, argued the case for Peltier's innocence.
Apted learned his craft in British television, directing episodes of such series as Coronation Street. It was there that he began his decades-long involvement with what has come to be known as the Up series. In 1964, he was involved in the selection of a group of seven-year-olds who were interviewed for a 39-minute broadcast called Seven Up! He checked in on them again in 1970, directing 7 Plus Seven, and continued the series with 21 Up (1977), 28 Up (1984), 35 Up (1991), 42 Up (1998), 49 Up (2005) and 56 Up (2012). Between visits, he's made some 20 feature films.
Although he has a Bond film to his credit (1999's The World Is Not Enough), as well as a fine adaptation of Marin Cruz Smith's novel Gorky Park (1983), his best movies straddle the line between fact and fiction. His breakthrough came with 1979's Agatha, a drama that speculated on 11 lost days in the life of mystery writer Agatha Christie. He followed that with Coal Miner's Daughter (1980), the picture that earned Sissy Spacek an Oscar for her portrayal of country singer Loretta Lynn; Gorillas in the Mist (1988), starring an Oscar-nominated Sigourney Weaver as wildlife activist Dian Fossey; Enigma (2001), based on the Second World War code-beakers working for British intelligence at Bletchley Park; and 2006's Amazing Grace, the story of 18th-century British anti-slavery campaigner William Wilberforce.
A past president of the Directors Guild of America (2003-2009) and its current secretary-treasurer, Apted is chairing the Guild committee that will negotiate a new master deal with the Alliance of Motion Picture and Television Producers. Direct talks on that contract are likely to begin later this year (2016).

Fun Fact: Michael Apted worked on the original Seven Up! documentary as a researcher. The 1964 Granda Television show was conceived and directed by Paul Almond, a Canadian who later returned to Canada to make such feature films as1972's Journey (starring his then-wife Geneviève Bujold) and Ups and Downs (1982; the screen debut of actress Leslie Hope).