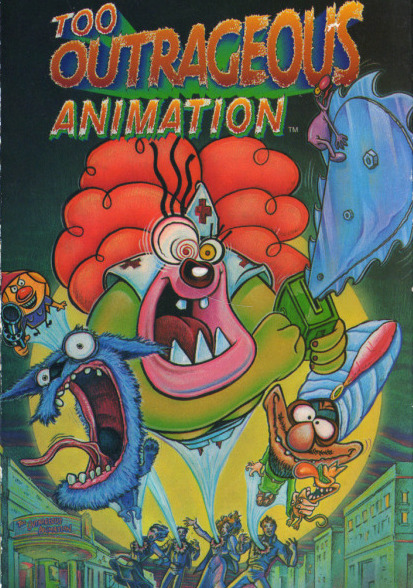 
With something to offend everyone


First celebrated on this day (October 28) in 2002, International Animation Day recognizes cartoon art. The most hands-on form of cinematic creation, it can be magical or malodourous. Terry Thoren’s 1994 collection Too Outrageous Animation goes for the latter.

TOO OUTRAGEOUS ANIMATION. Anthology feature produced by Terry Thoren. Running time: 88 minutes. Rated Restricted 18-plus with the B.C. Classifier’s warning: Some sex scenes and violence. NOT ALL CARTOONS ARE for kids.
Indeed, since the first mildly manic cartoon artist put pencil to paper, there has been something called "adult animation." No great Hollywood cartoon shop was complete without an insubordinate, hormonally-charged genius sitting in the back corner drawing dirty pictures.
(It still happens. Remember those stories about an X-rated microsecond in Who Framed Roger Rabbit during which Jessica Rabbit does a Sharon Stone and exposes herself?)
Eventually, cartooning was recognized as an art form. Aficionados began referring to it as "animation" and wrote wonderful books about its old masters — Walt Disney, the Fleischers, Tex Avery, Chuck Jones, Richard Williams . . .
In the process, though, what Don Bluth calls "classic animation" spawned two evil twins.
On one side, there is the Saturday morning television shill. A form of limited, commercial animation, it was developed by Hanna-Barberians for the purpose of merchandising junk to children.
On the other is what California cartoon packager Terry Thoren calls "outrageous animation." It's produced by those boys in the back corner, craftsmen with "little regard for issues of good taste, except when it comes to totally trashing them."
Art, as the late, great Marshall McLuhan used to say, "is anything you can get away with." That, and the constitutional protections that free societies guarantee to individual expression, has stimulated an interest in gross-out cartooning.
Or, as the production notes for Thoren's current feature-length compilation say: "The animators who come together on Too Outrageous Animation have two things in common:
"They like to throw up (pun intended) on the screen as many revolting, disgusting, painful and obscene images as they can conjure; and their cartoons are often not as long as their credit sequences."
With a running time of just under 90 minutes, his collection features 27 shorts. All but 10 come from the United States.
In what reads like a B.C. Classifier's warning, Thoren's notes list their subject matter as follows: "Blood, guts, hospitals, sex, amputation, masturbation, extraterrestrials, killers, animal torture, drunkenness, butt jokes, penises, sexual inadequacy, rock and roll, electrocution, nymphomania . . ."
And more: ". . . oral sex, auto-eroticism, taxes, witchcraft, internal organs, bird feces, vomiting, tooth decay, parking tickets, birth defects, scabs, farting and people of East Indian descent."
There are even some funny bits. Larry Royer's Skippy the Dog Food Taster is a genuinely inspired vomitoon.
Use Instructions, from Italy's Guido Manuli, uses backside imagery to promote a giddy eco-consciousness. Federico Vitali's French-made Guano! manages to deal with flatulence in an airy, Bruno Bozzetto-like manner.
Unfortunately, most of the deliberate bad taste is just tedious. Too much forced scrofula and too little real wit give Too Outrageous Animation the overall entertainment value of a used air-sickness bag.

Afterword: Worth recalling on 2016’s International Animation Day is the name of Terry Thoren, whom the Los Angeles Times recently called "one of the most important figures in the marketing and promotion of independent animated films in the United States.” Around the time that Too Outrageous Animation arrived in Vancouver, he was making the transition from Expanded Entertainment, the company that he founded in 1984, to chief executive officer at the production company Klasky Csupo Inc. A lifelong cartoon aficionado, Thoren had learned the business of distribution and marketing during five years (1979-1984) spent working for Los Angeles-based Landmark Theatres, a chain of U.S. cinemas specializing in art films. He applied that knowledge at his own Expanded Entertainment venture, successfully packaging and distributing compilations of animated short subjects. Among its releases were six editions of the International Tournee of Animation and four of its spin-off series, Animation Celebration, as well as the more focused The National Film Board of Canada's Animation Festival and The British Animation Invasion (both 1991).
In 1985, Thoren launched Animation Magazine as a way to publicize Expanded's offerings. Still being published, it is today among the cartoon industry's leading trade journals. Thoren also inaugurated the Los Angeles International Animation Celebration (now called the World Animation Celebration). A biennial affair, it was held most recently in October 2015. During his 12 years at Klasky Csupo, he oversaw the nine-season Rugrats cable TV series seen on Nickelodeon, and launched a movie division that produced its various spin-off movies. Currently, Thoren works in what he calls “the education market.” As the CEO of WonderGroveLearn, he runs a company that produces animated instructional tools for preschoolers.