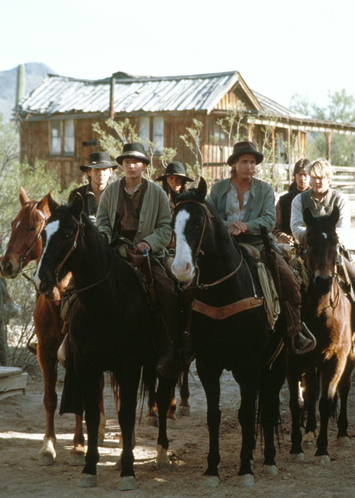 
Charisma not the same as having a plan


On this day (April 13) in 1881, New Mexico supreme court Judge Warren Bristol sentenced the 21-year-old William Bonney (aka Billy the Kid) to death. Already nationally known, Bonney was convicted of the murder of Lincoln County sheriff William Brady. The kid broke jail 17 days later, missing his May 13 date with the hangman. Tracked down by Sheriff Pat Garrett, he was shot to death shortly after midnight on July 14. Bonney’s obituary ran in newspapers across the country. According to social historians Robert N. Mullen and Charles E. Welch Jr., he is the most written-about gunslinger in Western folklore, with hundreds of books perpetuating his (brief) life and legend. In the process, his story became part of frontier folklore, a tale that has been skewed to support a variety of cultural narratives. It was first adapted for the screen in 1911 as the silent romance Billy the Kid. In 1930, it received major movie recognition in director King Vidor’s pioneering widescreen feature Billy the Kid, the film that established the standard version of the story. In 1938, America’s cultural elite embraced Billy the Kid the ballet, along with its rousing score by Aaron Copland. A lot more pictures followed. Today, Reeling Back adds four Billy the Kid titles to its archive (with links to each following the Afterword to this posting). A seriously subversive take on his exploits is offered in director Geoff Murphy’s 1990 revisionist Western Young Guns II.

YOUNG GUNS II. Written and co-executive produced by John Fusco. Music by Alan Silvestri. Directed by Geoff Murphy. Running time: 104 minutes. Rated 14 Years with the B.C. Classifier’s warning: "some violence, occasional nudity, suggestive scenes and coarse language.” "WHITE OAKS," SAYS THE sign. "We will not tolerate scum."
The riders, six young guns on the run from the law, pause to consider its meaning. "What's scum?" asks one of the group.
"Bad types," says their leader, the miscreant known as Billy the Kid (Emilio Estevez). "Politicians. Bankers. Cattle kings."
The Kid is quick. Given their location — the New Mexico Territory circa 1880 — he's also right.
He remembers the Lincoln County war. A struggle for power and economic advantage, it had as much to do with Old World hatreds as New World opportunism.
It wasn't "a cattle war," the Kid told territorial Governor Lew Wallace (Scott Wilson) during a clandestine meeting. It was "a merchant war. Irish against English."
Holding out the promise of a pardon, Wallace sought Billy’s co-operation in the prosecution of “15 rustlers.” Then the politician, bound to the interests of the Irish, betrayed the Kid.
Together with cattle king John Chisum (James Coburn), Wallace co-opted the Kid's old friend Pat Garrett (William Petersen). Offered the Lincoln County sheriff's badge and $500 in cash, Garrett agreed to undertake the destruction of Billy and his gang.
The Kid knows about "bad types."
There's a big difference between knowing something's wrong and knowing what to do about it, though. Director Geoff Murphy's smart-looking Young Guns II shows us the tragedy of a leader who has insight but no vision.
Murphy, the New Zealand-born filmmaker who made his mark with the antipodean features Utu (1984) and The Quiet Earth (1985), brings to his first American project enough skill and creativity to breathe new life into familiar material.
In the process, he's produced an unexpectedly subversive western, a sequel more finely-tuned than the film it succeeds.
In 1988’s Young Guns, Billy is a runaway teen adopted into the extended working "family" of rancher John Henry Tunstall (Terence Stamp), an English-born rancher who is something of a frontier Father Flanagan. Following Tunstall’s murder, Billy and the boys set out to avenge his death.
Young Guns II reunites Billy with the surviving members of his gang — cultured, sensitive Josiah "Doc" Scurlock (Kiefer Sutherland) and native American mystic Chavez y Chavez (Lou Diamond Phillips).
Murphy makes it clear that this is a group held together as much by the injustices these outsiders have suffered at the hands of exclusionary power brokers as by the Kid's considerable charisma.
Unfortunately, the Kid lacks a workable program. Or, as an outraged and frustrated Doc says during their directionless flight: "You ride a 15-year-old boy straight into his grave and the rest of us straight to hell, to hell!”
Murphy, working from John Fusco's florid, violent screenplay, gets some nicely focused performances from his attractive cast. Together, they make Young Guns II one of the summer's more thoughtful action entertainments.

Afterword: Both Christopher Cain, director of 1988’s Young Guns, and Geoff Murphy (Young Guns II; 1990) took their work seriously. Historically savvy, they knew that the short, violent life of William Bonney was relevant to the social issues of their own day. And ours. Recently, in a posting titled “The Class Struggle in the Old West,” Counterpunch.org contributor Louis Proyect wrote about historian Mark A. Lause’s new book, The Great Cowboy Strike: Bullets, Ballots & Class Conflicts in the American West. Proyect makes the point that “Billy the Kid had more in common with Occupy Wall Street than he did with faux cowboys like Ronald Reagan chopping wood (on his California ranch).”
Pity, then, that the movies were marketed to young audiences as “the Brat Pack on horseback” (an approach that generated boffo boxoffice results). I can recall a young woman referring to the photogenic male acting ensemble as “young buns,” but few kids seemed interested on its thoughtful re-evaluation of the 1880s, or the Lincoln County War. So, rather than dwell on the mysteries of movie sales campaigns, let’s turn to the matter of age-appropriate casting. It’s a matter of historical record that William Bonney never lived to see his 22nd birthday.
“Young bun” Emilio Estevez was 26 when he first played the role in 1988, and 28 when he reprised it in 1990. Looking at the call sheets from years past, Estevez was among the younger actors to be cast as the Kid. Others include:
*    Johnny Mack Brown, who was 26, in director King Vidor’s Billy the Kid (1930).
*    Roy Rogers, 27, in Joseph Kane’s Billy the Kid Returns (1938).
*    Buster Crabbe, 33, in Sam Newfield's Billy the Kid Wanted (1941).
*    Jack Buetel, 26, in Howard Hughes’s The Outlaw (1943).
*    Audie Murphy, 25, in Kurt Neumann’s The Kid from Texas (1950).
*    Paul Newman, 33, in Arthur Penn’s The Left Handed Gun (1958).
*    Chuck Courtney, 36, in William Beaudine’s Billy the Kid versus Dracula (1966).
*    Michael J. Pollard, 33, in Stan Dragoti’s Dirty Little Billy (1972).
*    Kris Kristofferson, 36, in Sam Peckinpah’s Pat Garrett and Billy the Kid (1973).