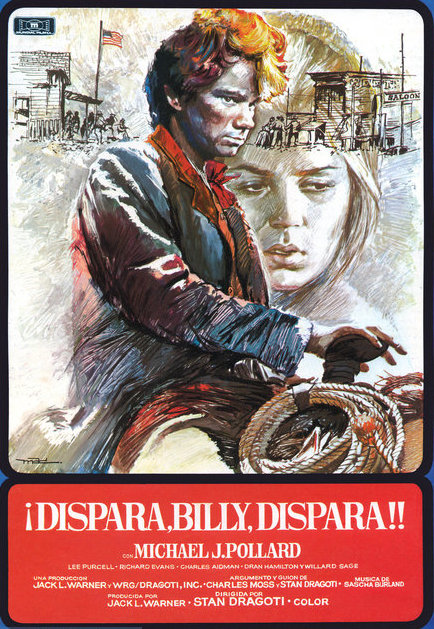 Born in a time of grime


On this day (April 13) in 1881, New Mexico supreme court Judge Warren Bristol sentenced the 21-year-old William Bonney (aka Billy the Kid) to death. Already nationally known, Bonney was convicted of the murder of Lincoln County sheriff William Brady. The kid broke jail 17 days later, missing his May 13 date with the hangman. Tracked down by Sheriff Pat Garrett, he was shot to death shortly after midnight on July 14. Bonney’s obituary ran in newspapers across the country. According to social historians Robert N. Mullen and Charles E. Welch Jr., he is the most written-about gunslinger in Western folklore, with hundreds of books perpetuating his (brief) life and legend. In the process, his story became part of frontier folklore, a tale that has been skewed to support a variety of cultural narratives. It was first adapted for the screen in 1911 as the silent romance Billy the Kid. In 1930, it received major movie recognition in director King Vidor’s pioneering widescreen feature Billy the Kid, the film that established the standard version of the story. In 1938, America’s cultural elite embraced Billy the Kid the ballet, along with its rousing score by Aaron Copland. A lot more pictures followed. Today, Reeling Back adds four Billy the Kid titles to its archive (with links to each following the Afterword to this posting). A startlingly gritty account of his early life is contained in director Stan Dragoti’s 1972 revisionist western Dirty Little Billy.

DIRTY LITTLE BILLY. Co-written by Charles Moss. Music by Sascha Burland. Co-written and directed by Stan Dragoti. Running time: 93 minutes. Mature entertainment with the B.C. Classifier's warning: violence and coarse language. MUD. SLOPPY AND SOGGY, it was ever-present on the frontier.
It was the frontier. The result of land clearance for townsites, it oozed through hundreds of railhead communities, none of them much different from Coffeeville, Kansas.
A dozen or so unpainted shacks lined up along a strip of mud, Coffeeville was a seedling struggling to take root. An epidemic in a nearby town was good news, because it meant that the afflicted settlement would die, and Coffeeville would become the undisputed population centre and an incorporated city.
To this forward-looking metropolis comes a New York family, a mother, son and the teen-aged boy’s antagonistic stepfather, stepping off the train into the sea of mud. The boy is not impressed by what he sees. Shuffling along behind his parents, he loses a shoe and and then his balance, falling flat on his back in the slippery roadway.
Dirty Little Billy is a dirt western, one of a new kind of horse opera that has emerged recently, giving renewed energy to the oldest movie  genre. Dirt westerns (not to be confused with black, blood or spaghetti westerns) try to tell it like it was. They view the frontier with harshly historic eyes, stripping away the myth and putting the legends in less glorious perspective.
There have been five of these new-style westerns in the past three years. By remarkable coincidence, each of them has a direct link with one of the 1960s' most popular non-westerns, director Arthur Penn’s Bonnie and Clyde (1967).
“Doc”, director Frank Perry's 1971 dirt western version of the gunfight at the O.K. Corral, starred actress Faye Dunaway, Penn’s Bonnie Parker. Robert Altman’s Vancouver-made McCabe and Mrs. Miller (also 1971) featured Warren Beatty (Clyde Barrow) in its title role.
Penn himself went on to make 1970’s Little Big Man, the frontier memoir of cavalry scout Jack Crabb (Dustin Hoffman). Bonnie and Clyde writers David Newman and Robert Benton went on to collaborate on the best of the dirt westerns to date, 1972’s Bad Company.
Now comes Michael J. Pollard, who played the Barrow gang's rubber-faced wheelman C.W. Moss, in the title role of Dirty Little Billy. From his graceless splashdown in the opening scene, it is clear that this Kid is no Paul Newman.
What he is is an ugly duckling with the gut knowledge that he'll soon be an ugly duck. Awkward and unambitious, he has no goal and nothing to contribute.
Director Stan Dragoti’s film proposes one way the legendary Kid might have gotten his start. For the record, his script is not true to the known facts about William H. Bonney, the name Henry McCarty went by before the dime novels started calling him Billy the Kid.
Even if his script is not the “real” story, his film has the firm ring of truth.
Not an awful lot happens in the movie’s 93 minutes. Billy, a congenial layabout, is invited to leave home. He does, only to take up with Goldie (Richard Evans), the very person everyone warned him against.
A wild young drop-out, Goldie runs a saloon, and lives off the money earned by his girlfriend, a prostitute named Berle (Lee Purcell).
Eventually, the good townspeople run Goldie out, but not before he has taught Billy how to hold a handgun, and has had Berle teach him how to hold a woman. Through it all, Pollard stumbles along magnificently, the perfect picture of malleable meanness and crude craft.
Giving support and shaping the direction of his performance are Evans as the hot-headed, resentment-filled Goldie, and Purcell, sensuous-lipped and dully attractive under layers of frontier grime. Dragoti, having dirtied his actors to the point where his audience can practically smell them, succeeds in drawing strong characterizations (as well as odors) out of them.
They're not articulate or even particularly bright people. Their lines contain no deep sentiments nor loudly ringing statements.
Dragoti lets setting and events speak for them. In Dirty Little Billy, they manage to say a mouthful.
*    *    *
WHEN MICHAEL J. POLLARD signed on for Dirty Little Billy, he was joining a long line of western stars, among them Roy Rogers, Buster Crabbe, Bob Steele, Audie Murphy, Robert Taylor and Paul Newman, all of whom have played the Kid.
In all [as of 1973], 18 performers have starred in more than 25 films, most of them featuring the Kid as a misunderstood hero. In quality they have ranged from the insightful (Arthur Penn's 1958 feature The Left-Handed Gun) to the ridiculous (1966’s Billy the Kid vs. Dracula).
Nor have filmgoers heard the last of him. Currently Sam Peckinpah, director of 1972’s The Getaway, has a Kid project before the cameras. Called Pat Garrett and Billy the Kid,  LINK <> his new film stars James Coburn and Kris Kristofferson in the title roles.
Due in theatres this fall [1973], the movie mixes newcomers and reliable character actors in a cast that includes Bob Dylan, Jason Robards, Barry Sullivan, Katy Jurado, Slim Pickens, Elisha Cook, Jr., Chill Wills and Jack Elam. Information on the storyline is vague, but western fans can be sure of one thing. Under Peckinpah's direction, the Kid will bite the dust with style.

Afterword: Dirt Westerns? OK, to paraphrase Indiana Jones in Raiders of the Lost Ark, I made this stuff up as I went along. In the early 1970s, I saw a new kind of Western emerging, and, influenced by the inventive reporting in the trade newspaper Variety, I thought I should give it a name. As a Google search of the Internet shows, the phrase “dirt western” did not catch on.
On the other hand, when I checked out the Wikipedia entry on “Western (genre)”, I found that the online encyclopedia listed 22 distinct Western movie subgenres. The pictures that I’d labelled “dirt westerns” fit neatly into the category of “revisionist Western,” defined as movies “that encouraged audiences to question the simple hero-versus-villain dualism and the morality of using violence to test one's character or to prove oneself right.” They also featured performers who were not conventionally good-looking, had long hair and shirts that were defiantly non-permanent-press.