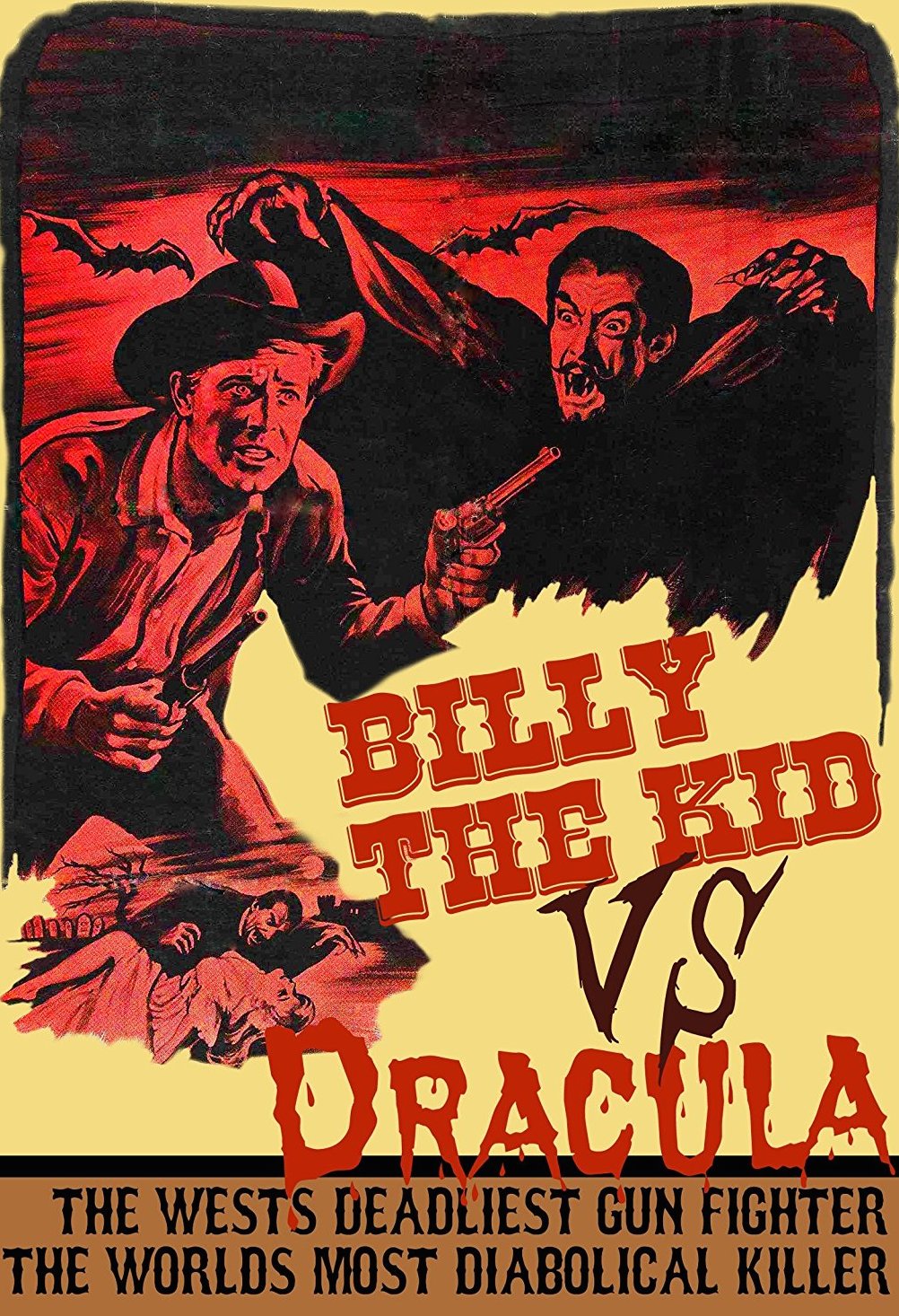 Actors Chuck Courtney and John Carradine are featured on a poster for director William Beaudine’s 1966 feature Billy the Kid Versus Dracula.

Staking out the frontier


On this day (April 13) in 1881, New Mexico supreme court Judge Warren Bristol sentenced the 21-year-old William Bonney (aka Billy the Kid) to death. Already nationally known, Bonney was convicted of the murder of Lincoln County sheriff William Brady. The kid broke jail 17 days later, missing his May 13 date with the hangman. Tracked down by Sheriff Pat Garrett, he was shot to death shortly after midnight on July 14. Bonney’s obituary ran in newspapers across the country. According to social historians Robert N. Mullen and Charles E. Welch Jr., he is the most written-about gunslinger in Western folklore, with hundreds of books perpetuating his (brief) life and legend. In the process, his story became part of frontier folklore, a tale that has been skewed to support a variety of cultural narratives. It was first adapted for the screen in 1911 as the silent romance Billy the Kid. In 1930, it received major movie recognition in director King Vidor’s pioneering widescreen feature Billy the Kid, the film that established the standard version of the story. In 1938, America’s cultural elite embraced Billy the Kid the ballet, along with its rousing score by Aaron Copland. A lot more pictures followed. Today, Reeling Back adds four Billy the Kid titles to its archive (with links to each one following the Afterword to this posting). Perhaps the most outlandish of the lot is director William Beaudine’s 1966 western-horror mash-up, Billy the Kid Versus Dracula.

JESSE JAMES MEETS FRANKENSTEIN’S DAUGHTER. Written by Carl Hittleman. Music by Raoul Kraushaar. Directed by William Beaudine. Running time: 83 minutes. AN AUSPICIOUS EVENT, THE melding of two great indigineous art forms into the Western-horror film, provides this week's fare at [Toronto’s] Downtown theatre.
Before out very eyes we share the spectacle as Jesse James Meets Frankenstein's Daughter and the epic confrontation of Billy the Kid Versus Dracula. It is a Technicolor conspiracy in cumulative cliche.
The perceptive audience will detect certain points of similarity between the two films, beyond the decidedly unsubtle use of the same sets, properties and extras. Both share the dubious talents of the same producer, director and writer combination.
And, of course, scripts approved by the Senate Sub-Committee Investigating UnAmerican Activities.
The whole problem is that the Frankensteins and Dracula are foreigners “tampering with the laws of God” and running around "undead.” Billy and Jesse are, after all, native-born, even if they do "'ride the owlhoot trail".
When you come right down to it, those stupid cowpokes really don't understand the ways of sophisticated  European monsters. They don't have enough sense to be terror struck by the idea of an aristocratic vampire ("aah what?") in their midst.
Seeking to impress us with their knowledge of  outlaw legends, the filmmakers strike out  completely with the occult beasties. Sure, James’s alias really was “Mr. Howard,” but a vampire never, never goes out in broad daylight!

Afterword: What can I say? I was young. A University sophomore writing for the campus newspaper, I was trying to be be snobbishly sophisticated and glibly entertaining at the same time. Who knew that I would someday make my living writing about movies? Not me, I can tell you.
A director whose career began in the silent era, William Beaudine is remembered  as one of Hollywood’s most prolific moviemakers. Billy the Kid Versus Dracula and Jessie James Meets Frankenstein’s Daughter were the last two of an estimated 178 feature films he made between 1922 and 1966. Although I gave him no respect in the above review, he was an A-list director between 1925 and 1935, guiding the performances of such stars as Mary Pickford and W.C. Fields. He was a major industry presence. And then he wasn’t. Beaudine spent the last three decades of his career cranking out low-budget pictures of every kind for Hollywood’s poverty-row studios.