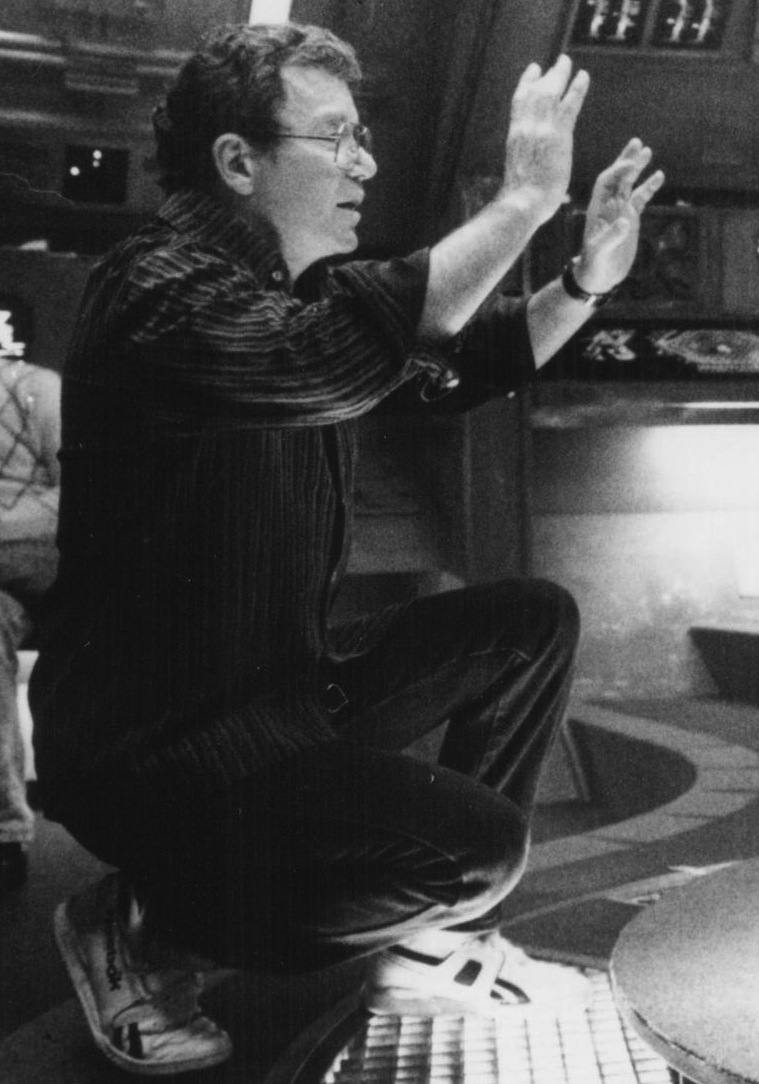 Out of uniform, but on the bridge and in command, William Shatner directs the 1989 feature Star Trek V: The Final Frontier.


Seeking what lies on the other side


The man has been mocked. In response, he's turned self-mockery into an art form, putting it on display during a July 2000 appearance at Montreal's Just for Laughs comedy festival. "Hey," he told a capacity crowd, "I’m not a Starfleet commander or T.J. Hooker; I don’t live on Starship NCC-1701, or own a phaser; I don’t know anyone named Bones, Sulu or Spock; And no, I’ve never had green alien sex – although I’m sure it would be quite an evening; I speak English and French, not Klingon; I drink Labatt’s, not Romulan ale; And when someone says to me, ‘Live long and prosper,’ I seriously mean it when I say ‘Get a life!’; My doctor’s name is not McCoy, it’s Ginsberg; And Tribbles were puppets! Not real animals! Puppets!; And when I speak, I never, ever, talk. Like. Every. Word. Is. Its. Own. Sentence! I live in California, but I was raised in Montreal; I believe in Priceline.com, where you never have to pay full price for airline tickets, hotels and car rentals; I have appeared on stage at Stratford, Carnegie Hall, Albert Hall and at the Monkland Theatre in NDG; And yes, I’ve gone where no man has gone before. But I was in Mexico, and her father gave me permission; My name is William Shatner and I AM CANADIAN." Today (March 22), on his 83rd birthday, Reeling Back celebrates Canadian Bill Shatner's feature film directorial debut, Star Trek V: The Final Frontier.

Friday, June 9, 1989.
STAR TREK V: THE FINAL FRONTIER. Written by David Loughery, based on a story by William Shatner, Harve Bennett and Loughery. Music by Jerry Goldsmith. Directed by William Shatner. Running time: 105 minutes. Mature entertainment with the B.C. Classifier's warning: occasional violence, coarse language and swearing. THEY'RE NOT GETTING OLDER, they're getting better.
In defiance of the conventional wisdom concerning sequels — to say nothing of the actuarial odds — Star Trek V: The Final Frontier is as good as anything they've done before, a trip to Trekkie heaven.
"They" are the captain and bridge crew of the USS Enterprise, seven actors who have been working in ensemble since 1966.
For three television seasons (1966-69) and five feature films, William Shatner, Leonard Nimoy, DeForest Kelley, James Doohan, Nichelle Nichols, George Takei and Walter Koenig have been an entertainment unit.
With age has come comfort and wisdom. On the big screen, the ST collective has learned to balance humour (derived from the interplay of familiar, developed characters) with imaginative, timely action adventures.
It was not always so. Their first feature, 1979's Star Trek - The Motion Picture, was a self-congratulatory reunion conducted in and around an adolescent remake of 2001.
Though ST II - The Wrath of Kahn (1982) attempted to introduce some new characters, it did so within a somewhat self-conscious extention of a previous TV episode.
ST III - The Search for Spock (1984) was a disappointing retrenchment, a ponderously fundamentalist rejection of the new directions.
Then, surprise, in ST IV - The Voyage Home the series found its heart. The crew connected with a blend of comedy and issue-oriented comity, a winning formula that keeps the current number moving along at a smart pace.
ST V - The Final Frontier opens with a hostage-taking on Nimbus III. Using a motley army of desert dwellers, a renegade Vulcan named Sybok (Laurence Luckinbill) seizes control of Paradise City, a gone-to-seed experiment in intergalactic harmony.
Taken prisoner in its saloon at the end of the universe are St. John Talbot (David Warner), General Korrd (Charles Cooper) and Caithlin Dar (Cynthia Gouw), the consuls representing the Terran Federation, the Klingon and the Romulan Empires.
Well, when there's something strange in ST's neighbourhood, who you gonna call?
Despite an incomplete refit, NCC 1701-A (aka The Enterprise) is off to the rescue, with Chief Engineering Officer Scott (Doohan) hard at work the while. On the bridge, though, the sight of the miscreant Sybock causes a disturbance in the ordinarily imperturbable force of Science Officer Spock (Nimoy).
Meanwhile, not far away, a Klingon Bird of Prey is also responding to the distress call. Learning the identity of the Federation's rescue ship, Captain Klaa (Todd Bryant) exults at the opportunity of doing battle with the "criminal'' Captain Kirk (Shatner).
Is Klaa crazy? Doesn't he realize that a Bird of Prey is no match for a Federation starship?
If you knew that, then you're a Trekkie. And you'll love first-time director Shatner's irrepressible new science-fantasy.
If you didn't know that, don't worry. Though David Loughery (working from a story he wrote with Shatner and producer Harve Bennett) uses, expands and develops the ST mythos more than any previous screenwriter, the basic plotline remains accessible to anyone in touch with current events.
The subject is religiously-inspired terrorism, and the treatment involves a certain sympathy for the devil. Charismatic and attractive, Sybok claims a vision "given to me by God."
An atypical, passionate Vulcan, he needs a starship to complete his quest to J'aaquaariei ("heaven, Eden, call it what you will''). He believes it has physical existence "beyond the Great Barrier at the centre of the Galaxy,'' someplace definitely in where-no-man-has-gone-before territory.
God, Sybok insists, "waits for us on the other side.''
Like Indiana Jones's quest for the Holy Grail, there is peril in the subject matter. Credit director Shatner for negotiating this potential minefield with a Spielbergian style and sensitivity to produce an entertainment that neither flags nor offends.

Afterword: Despite his considerable experience as a TV director, William Shatner has helmed only this one theatrical feature. He starred, of course, in the first seven Star Trek features, ending with Jame's Kirk's death scene in 1994's Star Trek: Generations. Among his fascinating career footnotes is the fact that Shatner, the Canadian, took his first step into the cosmos some 40 years earlier, appearing as a guest performer in the CBC's landmark children's show, Space Command (1953-1954). One of the public broadcaster's first dramatic TV series, the half-hour episodes were produced in Toronto, and set on a space station. In an equally fascinating twist, the show's star was James Doohan, who later served with Shatner's Kirk aboard Star Trek's Enterprise (as the ship's engineer, Montgomery Scott). In 1954, Shatner joined the Stratford Theatre company, while continuing his television career as Ranger Bob, the human host of Canada's own Howdy Doody puppet show. In 1966, the man who speaks English and French (but not Klingon), starred in Incubus, remembered as the only American feature film made in Esperanto. Flash forward to 2005, and he is the host and tongue-in-cheek subject of How William Shatner Changed the World, the Canadian Discovery Channel documentary about the evolution of high tech. Last year, the tireless artist directed the five-part Canadian mini-series The Captains Close Up. Sitting down with the actors who followed him in the various Star Trek spin-offs, Shatner revealed a talent as a probing, incisive interviewer. An active octogenarian, he remains an inspiration to us all.

See also: In an interview during a 1973 visit to Vancouver, supermarket spokesman William Shatner shared his enthusiasm for The Intruder, a 1962 film in which he played a racist agitator.  To view his 2000 "I am Canadian" monologue, click here.