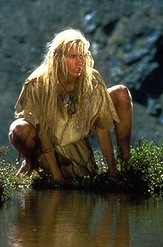 Ayla (Daryl Hannah), an orphaned Cro-Magnon, faces many risks within her adopted Neanderthal family, in director Michael Chapman's Clan of the Cave Bear (1986).


Evolution epic both serious and silly


Founded in Vancouver in 1971, Greenpeace was already fourteen years old when Daryl Hannah first encountered the wilderness wonders of B.C. during the making of The Clan of the Cave Bear. Born on this day (December 3) in 1960, Hannah is now a major environmental activist.

Friday, January, 7 1986.
THE CLAN OF THE CAVE BEAR. Written by John Sayles. Based on the 1980 novel by Jean M. Auel. Music by Alan Silvestri. Directed by Michael Chapman. Running time: 96 minutes. 14 Years Limited Admission with the B.C. Classifier's warning: some suggestive scenes, occasional violence and nudity. BROUD (THOMAS G. WAITES), son of Brun (John Doolittle), knows what he wants. A typical Neanderthal, he regards sex as an appetite to be satisfied when and where the need arises.
The need is there when he encounters Ayla (Daryl Hannah), adopted daughter of Iza (Pamela Reed), the tribal medicine woman. Broud raises his hands to his chest, gripping them together in a manner that signals his wish  to couple with her.
To his annoyance, she refuses him, begs to be left alone and even attempts to fend him off.
The future leader of The Clan of the Cave Bear, Broud will not be denied. Taking advantage of his size and strength, he forces himself on her.
Unlike Broud, director Michael Chapman has no clear idea of what he wants. In his attempt to bring Jean M. Auel's best-selling novel to the screen, he can't make up his mind whether to be serious or silly.
At times, he seems to be following the example of One Million Years B.C. (1966), the British-made prehistoric that featured duelling dinosaurs and Raquel Welch in a bunny-fur bikini.
Occasionally, there are hints of Quest for Fire (1981), Jean-Jacques Annaud's painstaking attempt to represent the distant past as it might really have been.
Realizing, perhaps, that both approaches were successful, Chapman opts for an awkward combination of the two. As a result, his picture is neither convincingly primeval nor outrageous enough to be much fun.
The rugged authenticity of his British Columbia locations notwithstanding, Chapman never manages to involve us in the story of Ayla, a Cro-Magnon orphan adopted by a tribe of passing Neanderthals. Despite an abundance of subtitles and voice-over narration, his picture is unconvincing as a portrait of man's early ancestors.
Though set "35,000 years ago," this cave bear's clan seem less like Neanderthals than a collection of leftover hippies. Actress Hannah, with her clean hair, could be a surfer girl who's accidentally wandered into their wilderness commune.
Consider that encounter with Broud. Early in the film, blonde, blue-eyed Ayla is identified as an "other," a woman who may like children but who is told that she won't have any of her own because no Neanderthal male could possibly find her attractive.
Under such circumstances, Broud's attentions ought to please her. Ayla's violent rejection of the male with the best prospects in the only world she knows doesn't make a lot of sense.
In addition, her refusal may be a breach of clan etiquette. This, after all, is a tribe in which women touch hunting weapons on pain of death.
None of this is meant to be taken seriously, a fact that becomes apparent when Broud has his way with Ayla. Because of Chapman's failure to bring the primordial past alive, the episode plays like a standard movie rape scene, an act of deliberate villainy used to set up an act of violent retributive justice further along in the story.
A former cinematographer, Chapman may have set out to produce the "evolutionary epic" described in the press notes. Somewhere along the way, though, it turned into Sheena Meets the Manson Family.

Afterword: To paraphrase Shania Twain's 2002 hit song, Daryl Hannah is not just a pretty face. After making her feature film debut in Brian De Palma's paranormal thriller The Fury (1978), she made a major impression on sci-fi fantasy fans, with her showy supporting performance as the acrobatic replicant Pris, in Ridley Scott's Blade Runner (1982). Less impressive, was her starring role the same year in writer-director Randal Kleiser's Summer Lovers, a Greek Islands idyll in which the 21-year-old actress spent much of her screen time nude. She came back with real strength in 1984. As the mermaid Madison, she was Tom Hanks's co-star in Ron Howard's hit fantasy Splash.
For me, though, the unforgettable Hannah moment comes in the 1984 feature Reckless, in which she plays Tracey Prescott, the prim high school cheerleader who falls for bad boy Johnny Rourke (Aidan Quinn). In a moment of introspection, she says to her mother, "I've always been good, haven't I?" Tracey is facing  up to the fact that being good isn't always being true to what matters. In recent years, Hannah has gone from introspection to being true to what she believes in — environmentalism. In 2005, she launched DHLoveLife, a website designed to offer sustainable solutions for green living. She's also walked the walk with personal activism that includes board positions with several organizations, as well as participation in numerous protests. She has demonstrated in favour of farmland preservation and against the Keystone XL Pipeline, actions that have added at least four arrests (and some jail time) to her resume.
All of that was in the future when Hannah arrived in B.C. for the filming of The Clan of Cave Bear, her ninth feature film. She returned the next year to play the title role in Roxanne  (1987), Steve Martin's imaginative modernization of Cyrano de Bergerac. She wouldn't be back to Vancouver again until 2000, the year she played a Secret Service agent foiling an assassination attempt in the TV movie First Target. Her 2006 visit was to play the alien invader queen the TV mini-seres Final Days of Planet Earth, followed by a turn as a hurricane-chasing scientist in 2009's Storm Seekers.  With more than 60 theatrical features and some 15 made-for-TV movies to her credit, she remains in demand as an actress. Her most current Canadian connection is a romantic relationship with the Toronto-born folk rocker and fellow environmental activist Neil Young. Daryl Hannah turns 55 today (December 3).

See also: B.C. provided many of the BCE locations for Jean-Jacques Annaud's 1981 "prehistoric," Quest for Fire. While the French director's feature was a semi-serious attempt to imagine life 80,000 years ago, prehistoric farce was the sole object of Caveman, released in the same year and set in "One Zillion BC."