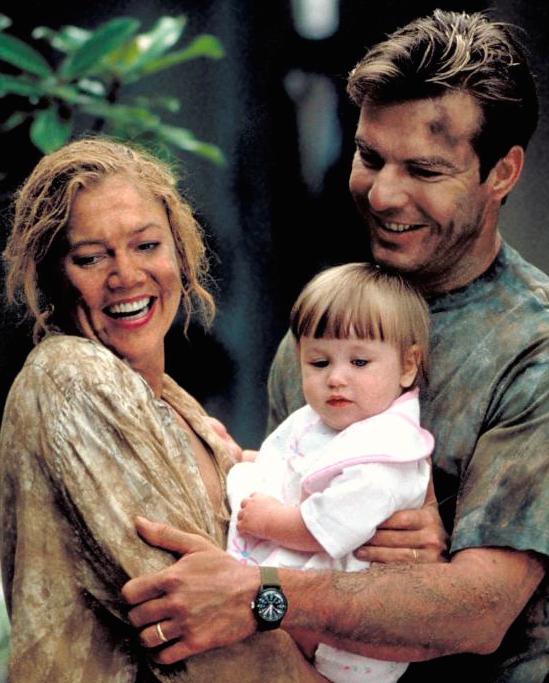 Take the kid to work day


An article in the current issue of Working Mother magazine celebrates “25 Fictional Working Mothers You Forgot Were Fabulous.” Inexplicably missing from the list is Undercover Blues’s Jane Blue, the superspy played by the fabulous Kathleen Turner, who was born on this day (June 19) in 1954.

UNDERCOVER BLUES. Written by Ian Abrams. Music by David Newman. Directed by Herbert Ross. Running time: 89 minutes. Mature entertainment with the B.C. Classifier’s warning: some violence, occasional very coarse language and suggestive scenes.
IT'S THE OLD DROP-DEAD-gorgeous-superspy-disguised-as-a-really-disgusting-looking-bag-lady trick.
A standard ploy to be sure, but it's a thing of beauty when played by a real professional. Muerte (Stanley Tucci), a New Orleans mugger way out of his depth in the world of international espionage, gobbles it up like jambalaya, setting in motion the secret agent's delightfully devious end game.
You can rest easy in retirement, James Bond. The new world order is safe in the hands of the Undercover Blues.
That's Jane Blue (Kathleen Turner), currently on maternity leave with dashing husband Jeff (Dennis Quaid). They're on vacation, enjoying a little parental bonding with their eight-month-old daughter, Jane Louise (Michelle Schuelke), when duty calls.
It seems that America's remaining stocks of the deadly, unstable explosive C-22 have been stolen. The culprit is deadly, unstable Paulina Novacek (Fiona Shaw), former head of the Czech secret service.
Since the collapse of the Central European country's communist regime, Novacek and her gang have been freelancing as arms dealers, finding ready customers among international terrorist groups. If the bantering Blues could just find a little time to save the world . . .
Older filmgoers will be reminded of The Thin Man, a series of sophisticated comedies in which a wealthy, witty Manhattan couple energized their loving marriage by solving murder mysteries. As written by Ian Abrams, Jeff and Jane Blue are a non-alcoholic Nick and Nora Charles.
Too obscure?
Would you believe Maxwell Smart and Agent 99? Under Herbert Ross's amiable direction, the spy-spoof is reinvigorated with a sly, post-feminist sensibility.
This working couple's partnership is a pleasure, their domestic bliss a blast.
Two terrific kids, the Blues love one another and their work. And they're good at it.
Consider the fact that the new mom is more bemused than angry when she learns that dad foiled a robbery during a late-night walk with their baby. "You took our child into a knife fight?"
"It was a fair fight," he says. "Two of us. Two of them."
Ross, a comedy director with experience in song and dance films, applies a choreographer's talents to the enterprise. In the process, he gets as much real excitement out of baby Jane Louise's first steps as out of the expected action scenes.
The ulta-competent Blues find a perfect comic foil in the macho, utterly outclassed mugger Muerte (Spanish for “Death”). Jeff calls him Morty (American for Mickey Mouse’s nephew).
Like Wile E. Coyote, Muerte never gives up. Our heroes cheerfully co-opt his blustering assassination attempts to their own use in their never-ending battle for truth, justice, etc.
Sharply scripted and deftly acted, Undercover Blues generates laughs while making married love look sexy. Would you believe fun?

Afterword: Arriving after Naked in New York (April) and House of Cards (June), Undercover Blues was Kathleen Turner’s third feature film released in 1993. That also was the year that one of the most versatile and talented actresses of the 1980s began experiencing daily pain. A series of medical test eventually settled on a diagnosis of rheumatoid arthritis, and a naturally athletic performer who took pride in doing her own stunts — she’d been a high school gymnast — faced the nightmare of spending the rest of her life in a wheelchair. The good news was that there were new drug therapies. The bad news was that the side effects altered her appearance and affected her mobility, changes the tabloid press spun into reports of chronic alcoholism. Her battle with the disease lasted into the beginning of the new century.
Wilth her illness in remission, Turner demonstrated that she was back by playing the role of Mrs. Robinson in a stage version of The Graduate that premiered in London’s West End in 2000. The show was a smash hit, partly because of its star’s highly publicized nude scene. Turner reprised the role on Broadway later the same year. In 2005, she was playwright Edward Albee’s choice to play Martha in the New York revival of Who’s Afraid of Virgina Woolf?, a performance that earned her a Tony nomination. An advocate for the non-profit healthcare provider Planned Parenthood since 1973, she wrote a June 16, 2017 opinion piece