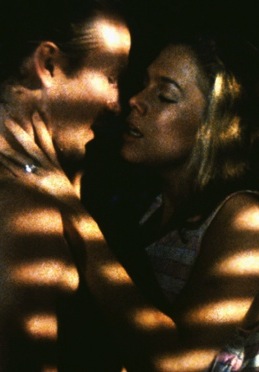 Enjoy the here and noir


If the movies teach us anything, it is to appreciate life in the moment. In the late summer of 1985, Michael Douglas gave Romancing the Stone screenwriter Diane Thomas a Porsche Carrera. That 1984 movie had meant a lot to Douglas. Its success had revived his stalled acting career. It was Thomas's first produced script and, recognized as a hot new talent, she was soon working with Steven Spielberg on his new feature Always. Then, in October 1985, the young writer died when her new car spun off California's Pacific Coast Highway. Thomas is remembered as the creator of one of the 1980s' great screen characters, romance-novelist-turned-adventuress Joan Wilder. Brought to life by Kathleen Turner, Wilder refuses to be labelled a "hopeless romantic." "No," she insists, "hopeful. Hopeful romantic." Turner's performance, her third in a feature film, was a career-making tour de force. She reprised Joan Wilder in 1985's Jewel of the Nile, and played the title roles in Peggy Sue Got Married (1986), V.I. Warshawski (1991), Julia and Julia (1987) and Serial Mom (1994). Fate threw Turner a curve ball in 1991, when she was diagnosed with acute rheumatoid arthritis. A painful disease, it resulted in a life-altering period of alcohol abuse that she discusses in her 2008 autobiography. Born on this day (June 19) in 1954, Turner made her motion-picture debut in writer-director Lawrence Kasdan's 1981 homage to film noir, Body Heat.

Wednesday, September 16, 1981.
BODY HEAT. Music by John Barry. Written and directed by Lawrence Kasdan. Running time: 113 minutes. Restricted entertainment with the B.C. Classifier's warning "some nudity and suggestive scenes, occasional violence. HERE'S A HOT TIP ON a late summer movie. Body Heat is a winner, an incendiary suspense drama ablaze with new talent both on screen and off.
On screen we re-encounter William Hurt, who made his feature debut earlier this year [1981] as the psychic adventurer in Ken Russell's Altered States. We are introduced to Kathleen Turner, a stage and TV actress making her first appearance on the big theatre screen.
He plays Ned Racine, a young lawyer stuck practicing in Miranda Bay, Florida, a small coastal community not far from Miami. Truth to tell, Ned is not a very good lawyer. His mind is on other things.
She plays Matty Walker, an attractive young woman who has married well. Although she has every material comfort, she is tired of being a doll-wife to mysterious financier Edmund Walker (Richard Crenna), a man who only has time to visit their palatial home on weekends.
Ned and Matty meet during a heat wave. As usual, he is on the make. She is just bored.
They banter.
Behind the camera is first-time director Lawrence Kasdan, a bespectacled young man whose career is about to go nova. A virtual unknown two years ago, his talent with a typewriter has made him one of the hottest properties in Hollywood today.
A screenwriter, Kasdan's big break came when Star Wars