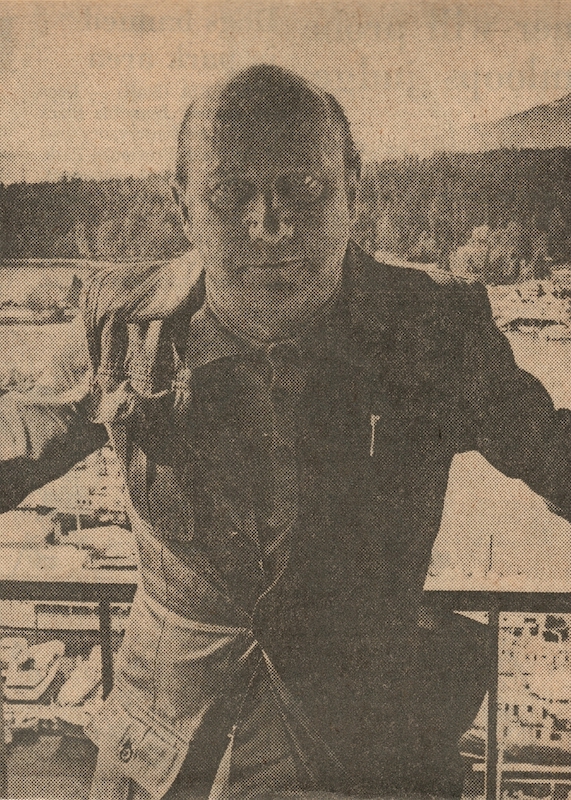 DONALD PLEASENCE, seen here in the photograph that accompanied his July, 1974 interview in The Province.

Taking in a fantastic view


Pleasence praises the beauty of B.C.


Noting that today (February 21) is World Whale Day reminded me of the afternoon in 1974 that I stood with actor Donald Pleasence on the deck of the Sara Lupe enjoying the sea view. He was in Vancouver for the filming of Journey into Fear, his third Canadian-made feature.

“I’D LIVE HERE IF I thought I could make a living," says Donald Pleasence. Made up and in costume, he leans back, appraising a panoramic view of Burrard Inlet. "Vancouver is the most beautiful seaside city in the world."
From the deck of the Sara Lupe, moored just off the North Shore's Pacific Environment Institute, the view is breathtaking. While waiting for his call to go before the cameras, Pleasence sits in the midsummer sunshine taking in, at a sweep, a horizon stretching from the apartment towers of West Vancouver to the cliffs at the end of the University Endowment Lands.
In the background, distant Mount Baker hovers spectre-like over Stanley Park. In the foreground, the grey-green waters of the inlet are freckled with billowing sails. A line of solemn freighters stretches out from English Bay.
"Just look at that," marvels the London-based character actor. "It's fantastic.”
Here for the filming of the new Journey Into Fear, Pleasence was greeted by the news that The Rainbow Boys, a film he made in B.C. two summers ago, will be shown on TV during his stay. Part of a package of Canadian-made features acquired recently by the CTV network, the film is being broadcast tonight [July 31,1974] at 8 on BCTV (Ch. 8).
Describing the movie as "the story of three eccentrics who go up a mountain looking for lost gold," Pleasence recalls that the project was originally called The Sasquatch Man. Developed by Canadian producer Gerald Potterton, the film co-stars Kate Reid and U.S. actor Don Calfa.
"Gerry talked to me about it when I was in Toronto making Wedding in White. I liked the character," Pleasence says. "We were out here for nine weeks that time."
The current visit will last at least a month. Through a friend of a friend, producer Potterton found a house for rent above Horseshoe Bay.
The Pleasence tribe on this trip includes the actor's wife, Meira, and six kids. Three — daughters Lucy, 14, Pauly, 11, and Miranda, 3½ — are his own. The other three are Potterton's holidaying youngsters.
"They're all having a great time, he says. "At least they seem to be, from the noise."
A hard-working actor, much in demand, Pleasence himself has little time for holidaying. "The way films are made today, an actor faces a real identity problem," he says. Deeply involved in his current role, he is additionally preoccupied with the development of characters for his next three features.
From here, he goes to Rome to play the sinister Danglars in a new version of the costume drama The Count of Monte Cristo. In that part, Pleasence gets to menace hero Richard Chamberlain, fresh from his last swash-and-buckle role in The Three Musketeers.
London is the next stop, there to don the character of a kindly English vicar caught up in a modern occult drama. The movie, to be called A Tennis Court, is "a truly unusual story about the ghost of a man who is still alive,” he says.
In the case of both The Count of Monte Cristo and A Tennis Court, plans call for the pictures to be released theatrically in Europe, but play as major made-for-TV movies in the United States and Canada.
Then it's on to Hollywood, and a modern western comedy called Hearts of the West. Pleasence is being called upon to play an aggressive actors' agent, a role that most experienced actors would relish.
In the talking stages is another Canadian project. If it happens, it would be the English actor's fourth film in this country. What he most wants to do, though, is find the time to do another stage play. "Perhaps in the springtime,'' he says wistfully.
In the meantime, there is the movie being shot right now. Journey into Fear, based on a novel by Eric Ambler, was a title that Pleasence recognized instantly.
"I've read everything of Ambler's," he says. ''I think he’s a terrific writer." And so, "when (director) Danny Mann called me up and asked to do it, I said I would."
Pleasence plays the part of Kuvetli, an undercover agent for the Turkish police assigned to protect a U.S. petroleum engineer who has been marked for assassination. At this particular moment, though, cinematographer Harry Waxman's camera is recording a tender moment between principals Sam Waterston and Yvette Mimieux.
Pleasence, still waiting for his call, glowers down on the scene from two decks above. From his vast repertoire of villains, he selects an accent and, in mock disgust, growls "love scenes . . . baah!"

Afterword: Donald Pleasence and Gerald Potterton knew each other from at least 1968. that was the year that the Oscar-nominated Canadian animator produced and directed Pinter People, an episode of the hour-long NBC Experiment in Television anthology series. Pleasence was among the actors who provided voices for the film’s cartoon sequences. In a letter to Christopher Gullo, author of 2012’s The Films of Donald Pleasence, Linda Pleasence remembered Potterton as her late husband’s “great friend.”
In 1976, the two collaborated on 48-page children’s book, Scouse the Mouse, written by Pleasence and illustrated by Potterton. Though the book is little remembered, the 1977 LP studio album based upon it (featuring Potterton’s cover art) is a collector’s item, due to the participation of former Beatle Ringo Starr in the role of the title character, a Liverpudlian rodent. Apparently lost for all time is Potterton’s animated film adaptation of the album, a project that was shelved due to a 1978 strike at Britain’s ITV network.
Currently, Bristol-based graphic designer Sam Bessant is researching a new book on Pleasence's career. An area ripe for further study is, of course, the actor’s Canadian connections, a decade of work that seems to have begun with a starring role in Toronto director Graham Driscoll’s “lost”1968 feature Creature of Comfort. Also in Toronto, he appeared in a 1972 episode of the TV series Dr. Simon Locke, and director William Fruet’s Wedding in White. He was in Vancouver for Gerald Potterton’s The Rainbow Boys (1973), and Daniel Mann’s Journey Into Fear (1975).
Back in Toronto, Pleasence starred in episodes of CBC-TV’s dramatic anthology shows Performance (1975) and Peep Show (1976). A string of features followed, including director Harvey Hart’s 1976 Goldenrod, shot in Calgary, and three Montreal-based projects: Denis Héroux's The Uncanny, Claude Chabrol’s Blood Relatives and Peter Collinson’s Tomorrow Never Comes (all 1978). Martin Burke’s 1978 feature Power Play was shot in Toronto, then Claude Pinoteau’s 1979 Franco-Canadian co-production, L’homme en colère, brought him back to Montreal.