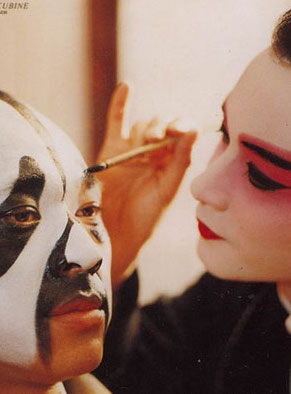 The night of the opera


A leader of China’s “Fifth Generation” of filmmakers, Chen Kaige was a survivor of Mao’s Cultural Revolution. Born on this day (August 12) in 1952, he came to international prominence with his 1993 Cannes Film Festival Palme d’or winner, Farewell My Concubine.

FAREWELL MY CONCUBINE (Ba wang bie ji). Written by Lilian Lee and Lu Wei. Based on the 1981 television drama and 1985 novel by Lilian Lee. Music by Zhao Jiping. Directed by Chen Kaige. Running time: 157 minutes. Rated 14 Years Limited Admission with the B.C. Classifier’s warning "some violence, occasional very coarse language.” In Chinese with English subtitles. READY FOR ANOTHER NIGHT at the Peking Opera?
Oh, I know. After the dreadful artificiality of M. Butterfly, you're reluctant to invest in yet another tale of classical Chinese cross-dressing.
You already know that director Chen Kaige's award-winning Farewell My Concubine focuses on a relationship between two male opera stars, one famous for his ability to play female roles. You may have heard that Gong Li, currently [1993] Chinese cinema's most famous actress, plays the woman who comes between them.
What you need to know is that Chen's English-subtitled drama is Shakespearean in its sweep, Dickensian in its social sensibility and thoroughly modern in its movie-epic ambition.
If you liked Bernardo Bertolucci's The Last Emperor, you'll want to revisit the same eventful half-century, this time as seen through the eyes of a trio of outsiders whose only agenda is survival.
Like Bertolucci, Chen tells his story in flashback. It begins in 1977 with the actors Cheng Dieyi (Leslie Cheung) and Duan Xiaolou (Zhang Fengyi) meeting for the first time in 11 years.
Alone but in costume, they recall dialogue from the final scene of the tragic opera Farewell to My Concubine. It's a tale of love and loyalty in which beautiful Yu Ji stands by her man, the defeated King of Chu, preferring death to their separation.
Returning to 1924 — "the warlord era" — we meet the child Douzi (Ma Mingwei). The son of a Peiping prostitute (Jiang Wenli), he is abandoned to the care of the All Luck and Happiness Academy, a workhouse-like school where merciless disciplinarian Guan Jinfa (Lu Qi) trains boys for the acting life.
Peking Opera was founded in 1790, the year that Mozart's Cosi Fan Tutte premiered in Europe. Because it shares with Elizabethan theatre the tradition of all-male performing companies, delicate Douzi (later known as Cheng Dieyi) is assigned to women's roles.
Fate will pair him with the hearty, rebellious Shitou (Fei Yang), an older kid with an instinct for flight. Despite numerous escape attempts, the boy who becomes Duan Xiaolou always ends up back in the compound.
Douzi ultimately escapes into his roles. Inspired by the respect accorded established performers, he applies himself with determined resignation. "What does it take to become a star?" he asks. "How many beatings?"
A co-production involving all of the Chinas — Hong Kong, Taiwan and the Peoples Republic — Chen's heart-rending feature uses its domestic drama to ask some not-so-subtle questions about modern Chinese society. What does it take to become a nation?
How many beatings, betrayals, occupations, revolutions, acts of heroism, renunciation, self-sacrifice and forgiveness? What is a nation; indeed, what is a person "by nature?"
Unlike Bertolucci, whose Last Emperor found serenity as a citizen comrade, Chen makes it clear that the great Asian drama is far from over. His finely crafted Farewell My Concubine offers a fascinating, humanely sympathetic look at its beginning.

DID YOU HEAR THE one about the Vietnam veteran turned movie director?
Much to the dismay of government officials and film industry executives, he insists upon making movies about his generation, movies that critically examine historical movements, social issues and authentic, fascinating characters.
What's more, he's good at it. His films win awards and critical praise. In them, we glimpse the beginnings of cinema's Asian Pacific century.
Score one if you guessed Oliver Stone. The controversial American auteur won directorial Oscars for his personal combat memoir Platoon (1986) and for his incendiary look at the anti-war movement, 1989's Born on the Fourth of July.
Among this year's [1993] Christmas features is his Heaven and Earth. Stone's third Vietnam war drama, it's the biography of a Vietnamese teen who survived the conflict and the challenges of a far-from-perfect life in a postwar U.S.A.
Based on the true story of Le Ly Hayslip (born Phung Thi Le Ly in the village of Ky La), Stone's film will challenge audiences with its Asian perspective. It should provide a grand finale to a year of eye-opening Asian-themed features.
Score a bigger point if you guessed Chen Kaige. The Beijing-born director of Farewell My Concubine, he escaped China's Cultural Revolution by joining the army.
Like Stone, he served in support of Vietnamese government forces in their civil war. Unlike Stone, Chen worked for the North, helping the ultimately victorious Viet Cong.
What's true of Stone as an artist — the epic sense, the dedicated iconoclasm, the political sensitivity — is also true of Chen. Together, they are shifting world cinema's centre from mid-Atlantic to mid-Pacific, acknowledgement of the growing importance of the Asian influence in America and the fact that Hollywood is, after all, a Pacific Rim city.
Europeans, to their credit, were among the first to notice. Energized by the unique story of Pu Yi, China's The Last Emperor, Italy's Bernardo Bertolucci examined a half-century of history and won 1987's best picture Oscar.
Britain's Alan Parker connected the Asian experience to America in his 1991 feature Come See the Paradise. The story of a racially mixed marriage disrupted by the internment of Japanese Americans during the Second World War, it made it clear that the new frontier is westward.
Four current films [1993] serve to underscore the fact that Asian themes, characters, authors and filmmakers are out front with the energy and originality that keeps film on the cultural cutting edge.
Chen's Farewell My Concubine covers the same historic ground as Bertolucci's film with an insider's knowledge and emotional intensity. An example of the dynamic at work in contemporary Chinese film, his picture is based on a potboiler novel by Hong Kong screenwriter Lilian Lee.
A co-production involving all three Chinas — Hong Kong, Taiwan and the People's Republic — it delivers generously in every creative department. A searing tale of love and betrayal, it uses art and sexual ambiguity to involve filmgoers in a multi-faceted tragedy.
Hollywood taps into the same dynamic with M. Butterfly, Canadian director David Cronenberg's dodgy adaptation of L.A.-born David Henry Hwang's 1988 stage play. A politically charged drama of romantic deception, it's based on the true story of a French embassy officer who became romantically involved with a Peking Opera star who turned out to be a man and a Chinese intelligence agent.
More successful by every measure is Hong Kong-born American director Wayne Wang's adaptation of Californian Amy Tan's The Joy Luck Club. Offering the interwoven stories of four Chinese-American mothers and their grown daughters, it is both a brave and wonderful example of adult filmmaking.
The same can be said for Taiwanese director Ang Lee's romantic deception comedy, The Wedding Banquet. Also inspired by a true story, it is the cross-cultural tale of a gay Chinese American who agrees to a marry a lady from Shanghai to satisfy his very traditional parents.
Among the year's best pictures, these features serve to introduce us to the look of 21st century filmmaking. As with Asian cuisine, the promise is of interesting new taste sensations.

The above is a restored version of a Province entertainment feature by Michael Walsh originally published in 1993. For additional information on this archived material, please visit my FAQ.

Afterword: Eventually even Time magazine would pick up on cinema’s pivot to Asia. Its January 29, 1996 cover story was a nine-page report headlined “Chinese Movie Magic.” It began by describing the action on the set of Chen Kaige’s Temptress Moon, in which he is directing his Farewell My Concubine stars Leslie Cheung and Gong Li. Now, flash forward to 2020, and the news coverage is less positive.  (U.S. Attorney General William) "Barr condemns Disney and Hollywood for ‘kowtowing’ to China,” Britain’s Guardian reported in mid-July. Currently, the action is being directed by the Trump administration in a narrative that casts the Chinese dragon as the ever-devious enemy.
Clearly, we’re talking about two different things. No longer are we examining film artists (such as Chen Kaige) and their screen creations. The focus today is on the corporate entities (such as Disney), their deal-making and its place in the great geopolitical game involving the U.S. and the emerging Asian superpower. (Ever astute, Oliver Stone warned against just such a development in a 2015 speech to the World Business Forum in Hong Kong.)
Nor are the Chinese immune from xenophobic pettiness. According to a March 2020 report in the South China Morning Post, “Nationalism on the increase in China, and film stars and celebrities are being outed for holding overseas passports.” Among those targeted by the “online witch hunt” are “yellow-skinned American” Liu Yefei (star of Disney’s Mulan, scheduled for release on September 4), and U.S. green-card holder Chen Kaige.
Celebrated as a member of Chinese cinema’s “fifth generation,” Chen is credited with popularizing Chinese movies around the world. By the time his 1986 feature The Big Parade arrived in Vancouver, we’d already seen him as an actor — he played the captain of the Imperial Guard — in Bernardo Bertolucci’s 1987 epic The Last Emperor. In 2002, he directed his first (and only) English-language film, the Anglo-American thriller Killing Me Softy, with Heather Graham and Joseph Fiennes. In 2009, Chen was one of a small army of cinematic celebrities to have a cameo role — he played Chiang Kai-shek’s “sworn brother” Feng Yuxiang — in the Chinese historical epic The Founding of the Republic. Scheduled for release this year is Flowers Bloom in the Ashes, a semi-autobiographical feature in which Chen directs both his wife Chen Hong and son Arthur Chen.