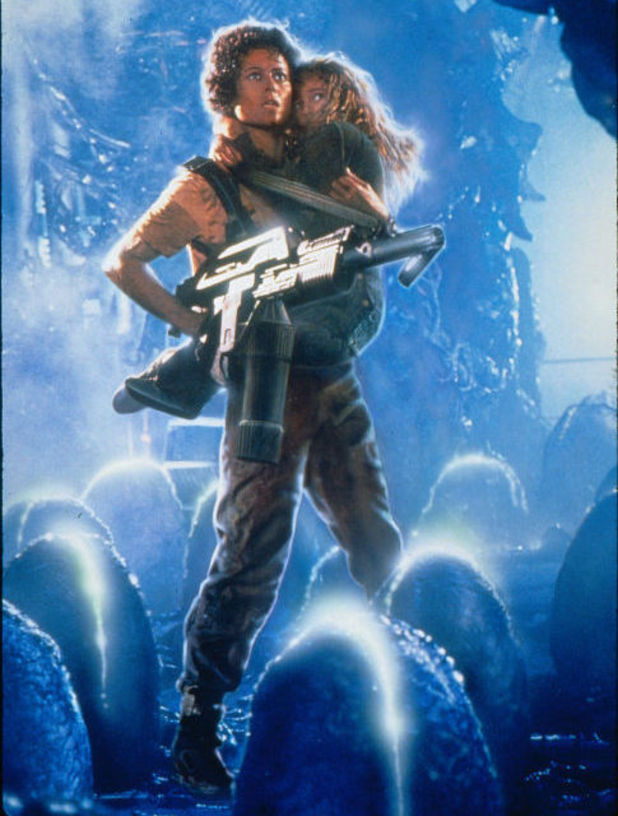 Ellen Ripley (Sigourney Weaver) is determined than no more harm will come to the traumatized "Newt" Jordan (Carrie Henn) in James Cameron's Aliens (1986).


Romantic is not the first word that comes to mind to describe spectacularly successful feature filmmaker James Cameron. Born on this day (August 16) in 1954 in the Northern Ontario town of Kapuskasing, Cameron's testosterone-charged films and action-oriented image (to say nothing of his five marriages), invite descriptions like macho and alpha male. And yet, if you take a good hard look at the writer/director's eight fictional features, all but one are powerful love stories, romances in which strong women drive the narrative. His two Terminator pictures (1984 and 1991) are all about Sarah Connor and her unstoppable mother's love. Married love is celebrated in both The Abyss (1989) and True Lies (1994), stories in which the wives are quite the equal of their husbands. Love's power was unmistakeable in his Titanic (1997), the top-grossing film of all time until Avatar (2009), his tale of exobiological attraction and ecological activism, became the new box-office champion. Our special focus today, though, is on Sigourney Weaver's Ellen Ripley and her rescue mission to the space colony on LV-426. Ripley's martial skills look a lot like maternal instinct when she assumes the role of mama bear protecting her adopted cub in Cameron's 1986 feature Aliens.

Monday, July 21, 1986
ALIENS. Based on characters created by Dan O'Bannon and Ronald Schusett. Music by James Horner. Written and directed by James Cameron. Running time: 135 minutes. 14 Years Limited Admittance with the B.C. Classifier's warning: some frightening and gory scenes, very coarse language and swearing. MOVIES NEED HEROES. When the Duke died, everyone agreed that motion pictures had lost a great one, an  actor who embodied much of what was positive, dynamic and good about America.
Since his death in 1979, the John Wayne presence has been sorely missed. Tough and right-thinking, he played the kind of take-charge individual who combined wholesome attitudes with steely-eyed competence.
Despite the best efforts of the Sellecks, Stallones, Schwarzeneggers and Norrises, no man yet has been able to fill his boots. Perhaps no man can.
But wait! The Duke's spirit is suddenly abroad in the land again. Aliens, writer/director James Cameron's stunning sequel to Alien (1979) has a star in the best Wayne tradition — a lantern-jawed performer with enough strength and integrity to take on an archetypically heroic American role.
No man, she is Sigourney Weaver, the purposeful stage actress who made her screen debut playing warrant officer Ellen Ripley, the sole survivor of the space freighter Nostromo
in director Ridley Scott's Alien. Her return bout with the monstrous xenomorphs of planet LV-426 establishes her as a bona fide hero of the first rank.
Cameron's film opens with Ripley, and her ginger cat Jones, being picked up by a deep space salvage crew. Fifty-seven years have passed since their escape from the Nostromo, and corporate representative Carter J. Burke (Paul Reiser) finds her story of acid-blooded creatures a little hard to believe, especially since the planet in question has recently been colonized.
Burke has second thoughts when communications with LV-426 suddenly cease. Together with Colonial Marine Corps Lt. Gorman (William Hope), he visits Ripley to offer her reinstatement with the company, if she will accompany them on a rescue mission.
Director Cameron, whose 1984 film The Terminator was non-stop action, spends the first hour of Aliens establishing his characters, their hardware and personal conflicts. Fans of Robert Heinlein's no-nonsense science fiction style will appreciate the Starship Trooper camaraderie  of Cameron's space marines, and the careful attention to design detail in every scene.
Arriving on the planet, the marines find the colony's buildings deserted. During their tense, careful sweep, they find a single survivor, a traumatized child named Newt (Carrie Henn). The relatively long establishing time is necessary because, once the H.R. Giger-designed extra-terrestrials make their appearance, the battle is joined and the action is non-stop for the rest of the movie.
A sequel that matches the original for imaginative shocks, jolts and edge-of-the-seat excitement,  Cameron's picture is a breathlessly paced thriller that never lets up. What's more, it's an action film with a star performance that gives it a vital human dimension.
It is Weaver, doing what a hero has got to do, who turns the Aliens special-effects show into a solidly involving fantasy-drama.

Afterword: Aliens established Sigourney Weaver's Ellen Ripley as the essential heart of the franchise. The second actress to be nominated for a best actress Oscar for a performance in a science fiction feature — Jane Alexander's nomination for the 1983 post-apocalypse drama Testament was the first — Weaver built her career on alternating fantasy roles with solidly mainstream features. She appeared in two more Alien sequels: Alien 3 (1992) and Alien Resurrection (1997), as well as both Ghostbusters features (1984 and 1989) and the fan-convention-goers' favourite, Galaxy Quest. In 2009, she was again directed by James Cameron in his blockbuster hit Avatar. Three Avatar sequels are currently in pre-production, all of them featuring Weaver. As for the Alien franchise, it went sideways for a time, generating two crossover features in which the title creature found its way to earth and into an adversarial relationship with the extraterrestrial villain from 1987's Predator. The aggressive uglies battled one another in 2004's Alien vs. Predator and Alien vs. Predator: Requiem (2007), as well as in spin-off comic books, paperback novels and video games. As to who won, I honestly couldn't care less.

See also: For more on James Cameron, read my reviews of The Terminator and The Abyss.