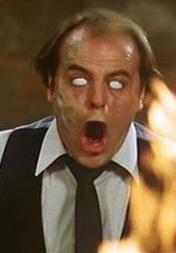 
A frequent player in the D.C. Universe in recent years, Michael Ironside is memorable in both good guy and bad guy roles. Born on this day (February 12) in 1950, he was the poster boy for explosive aggression in director David Cronenberg’s 1981 sci-fi shocker Scanners.

SCANNERS. Music by Howard Shore. Written and directed by David Cronenberg. Running time: 104 minutes. Restricted entertainment with the B.C. Classifier’s warning: violent and gory scenes throughout. A.E. VAN VOGT HAD the vision. In Slan, the Canadian-born science-fiction writer's 1940 novel, a lone telepath, frightened and isolated, searches for the secret of his identity in a large and hostile city.
Brian De Palma had the style. In The Fury, the American movie director's 1978 shocker, he dazzled us with special effects, using the idea of psychic skills as a springboard for a film that was more an exercise in audience manipulation than straightforward storytelling.
David Cronenberg has it all together. In Scanners, the Toronto-based writer-director reaches out to urban audiences, involving us directly in a nightmare of riveting power and almost painful intensity.
Cronenberg, 37, understands that nightmares come from within, and that the best terror tales are Everyman's dreams gone wrong. His film opens in a world without warmth, without seasons, without any sense of day or night.
It is a downtown shopping mall, an underground plaza not unlike the Pacific Centre or Royal Centre complexes [in Vancouver]. Into this ceramic-tiled,  fluorescently-lit catacomb stumbles Cameron Vale (Stephen Lack), a stubble-bearded derelict.
Vales are everywhere in our cities, “there but for the grace of God . . .” individuals we see without seeing, because their social isolation and glazed eyes reflect our deepest insecurities, our own fear of failure.
A middle-aged woman notices Vale. He senses her disgust and, despite himself, focuses his resentment upon her, only to see her go into painful convulsions. Two men break from the crowd — plainclothes policemen? agents of some secret security force? — and chase Vale. A gun is fired and a tranquilizing dart pierces his flesh . . .
“You are 35 years old, Mr. Vale,” says the bearded man who calls himself Dr. Paul Ruth (Patrick McGoohan). "Why are you such a deadbeat, such a piece of human junk?
“The answer is, you’re a scanner. It is the source of all your agony, but I will show you that it can be a source of great power.”
Uniqueness. Power. Every science-fiction fan empathizes with the fictional hero who discovers that, far from being a failure and a misfit, he or she is gifted with godlike powers.
By focusing our attention on Vale, Cronenberg creates a powerful point for audience identification. In choosing telepathy as his subject, the director taps directly into the imaginative power within us all.
Telepathy is not an  easy gift. It’s "not mind-reading," Dr. Ruth tells us. "It is the direct linking of two nervous systems."
Because the unwitting telepath, or scanner, “has no control over his power, he risks madness every time he steps into a crowded room.”
Dr. Ruth understands.
“With all those other voices in your head, how could you develop a self?” Fortunately, Dr. Ruth has developed a drug called "Ephemerol," a scan suppressant.
Within the framework of Vale’s nightmare, Cronenberg has constructed a tight mystery-thriller. There is a scan underground led by a renegade scanner named Darryl Revok (Michael Ironside), a man with the power to make his enemies’ heads explode.
There are non-scanner killers, who are paid to search out and destroy scanners. There is a double agent within Dr. Ruth's organization.
The strikingly original filmmaker responsible for 1975’s Shivers, Rabid (1977) and The Brood (1979), David Cronenberg is just beginning to get the recognition that is his due. In the past few weeks he has been the subject of a cover story in the Canadian newspaper magazine supplement Today, and of a two-page profile in the U.S. magaine Newsweek.
He has, according to Newsweek’s Jack Kroll, “the two qualities necessary to make a master of the horror genre: he can scare the nightlights out of you, and the grisly details of his films are part of a vision of the world.”
Scanners is the latest door into Cronenberg’s nightlighted world.

Afterword: As director Paul Verhoeven discovered, Toronto-born actor Michael Ironside is a scene-stealer. Whether cast as an unrelenting villain (as Richter, in 1990’s Total Recall, he menaces Arnold Schwarzenegger’s character Douglas Quaid) or as an inspiring teacher (as Lt. Rasczak, in 1997’s Starship Troopers, he mentors Casper Van Dien’s Johnny Rico), Ironside dominates his every screen moment. In 1980, when David Cronenberg cast him to play rebel telepath Daryl Revok in Scanners, Ironside had already established himself as a reliable supporting player in Canadian feature films and television.
Revok’s ability to make heads explode — a screen event that made Scanners forever memorable — was key to Cronenberg’s tale of rogue science, and Ironside’s performance provided the actor with his breakthrough to starring roles. In the years since, he’s worked constantly, amassing an astonishing number of credits on both sides of the border.
In recent years he’s made multiple appearances in the DC Universe, including voice performances in the animated 1996-2000 Superman series and the 2003 Justice League (as the evil Lord Darkseid), as well as in the 1998 New Batman Adventures (as the 1980s' Dark Knight). Ironside has also visited Vancouver to play Lois Lane’s father, General Sam Lane, in the TV series Smallville (2004, 2010), and Lewis Snart, the father of Leonard and Lisa, in a 2015 episode of The Flash. Hardly slowing down, the actor has a feature film (American Desert) scheduled for release in 2019 and two others (The Jester from Transylvania and My Best Friend Depression) in post-production. Michael Ironside turns 69 today (February 12).