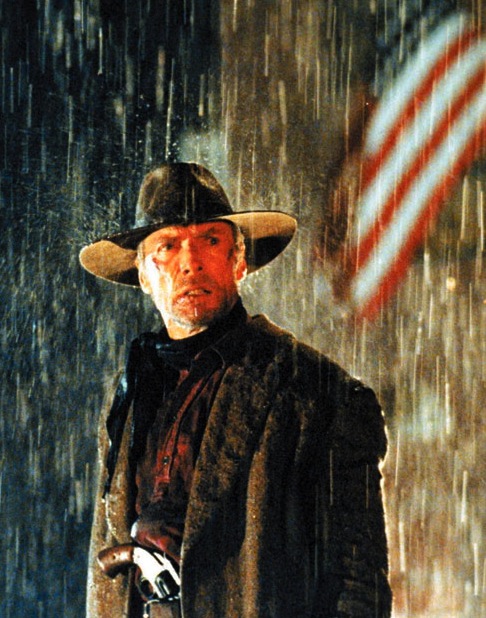 Reformed badman Will Munny (Clint Eastwood) faces the consequences of his past in director Clint Eastwood's Unforgiven (1992).


Currently nominated for six Academy Awards, including best picture, American Sniper is Clint Eastwood's 34th feature as a director. It is also the most controversial of the eight pictures up for this year's Oscar. Based on the autobiography of Chris Kyle, a U.S. Navy SEAL who served four tours as a military murderer in Iraq, it has aroused the ire of critics on all sides of the political spectrum, some of whom have vilified Eastwood as a Pentagon propagandist. Until I've actually seen the film, I'm inclined to cut Clint some slack. Over the years, his films have tended to explore issues through the lived experience of individuals. In his fourth feature as director, 1975's The Eiger Sanction, he played a government assassin with few illusions about the "patriotic" nature of his work. The Marine gunnery sergeant he played in his 12th feature, Heartbreak Ridge (1986), sees Americans reduced to celebrating the invasion of Granada as a geopolitical victory. Eastwood's 27th and 28th pictures, the 2006 double feature of Flags of Our Fathers and Letters from Iwo Jima, looked at the men involved on both sides of the historic battle, and found a shared disillusionment. A populist rather than a political filmmaker, Eastwood makes pictures that express the angst of our times, none better than his Oscar-winning 1992 Western, Unforgiven.

Friday, August 7, 1992.
UNFORGIVEN. Written by David Webb Peoples. Music by Lennie Niehaus. Directed by Clint Eastwood. Running time: 131 minutes. Rated 14 Years Limited Admission with the B.C. Classifier's warning: "some violence and very coarse language, occasional suggestive scenes." HIS NAME IS CLINT Eastwood.
Like John Ford, Anthony Mann and Sam Peckinpah before him, he makes westerns.
At 62, director Eastwood has made his masterpiece, a dark, unsparing meditation on truth and personal justice called Unforgiven.
Like Francis Ford Coppola's 1972 gangster epic The Godfather,  and Oliver Stone's 1986 war movie Platoon, it is a film that transcends its genre to stand among the decade's best pictures.
Speaking directly to the here and now, Eastwood offers us a tale in which every character has depth and complexity, inner demons and unexpected limitations.
The Citizen Kane  of adult westerns, Unforgiven's familiar plot elements illuminate two of the lessons necessary to surviving hard times.
First, the truth is not simple.
It's springtime, 1881, and The Schofield Kid (Jaimz Woolvett) is looking for a legend. Set on a career as a frontier gunman, he's grown up listening to his Uncle Pete's tales of the magnificently murderous outlaw Will Munny.
The reality, mud-stained Kansas hog farmer Munny (Eastwood), is a disappointment to him. "You don't look like no mean, cold-blooded killer."
"My wife cured me of that," says the worn, weary widower. "She cured me of drink and wickedness."
Lesson two: The truth is not glorious.
Dime novelist W.W. Beauchamp (Saul Rubinek) creates legends. He's been playing Boswell to the natty, notorious English Bob (Richard Harris), a hired killer he calls "the Duke of Death."
For the credulous Beauchamp, plain-spoken Wyoming lawman "Little Bill" Daggett (Gene Hackman) is a revelation. The sheriff of Big Whiskey, a high country cattle town, Bill knew Bob back when.
When Bob arrives in town to collect some easy bounty money, Bill disarms and humiliates the boastful Brit with professional ease. "I do not like assassins, or men of low character," says the sheriff.
Bill is about to meet Will.
Though reformed — "I've changed," says the most introspective character Eastwood's ever played. "I ain't like that no more." —recovering alcoholic Munny is tempted by a $1,000 bounty and the apparent justice of the cause.
Together with The Kid and his old partner Ned Logan (Morgan Freeman), he arrives in Big Whiskey on a damp and stormy night to confront Daggett and challenge our notions of heroes, villains and desperate American dreams.

Afterword: Shot on locations in Alberta, Unforgiven was nominated for three Academy Awards. Though Eastwood missed the best actor prize, he took home the best picture and director Oscars. (He managed the same double win for his 2004 feature Million Dollar Baby.) The first two paragraphs of the above review were meant as an allusion to the famous October 22, 1950, meeting of the Directors Guild of America. The film industry was in an anti-communist frenzy, and the influential Cecil B. DeMille was demanding that "loyalty oaths" be made mandatory for Guild members. Another man of influence stood against him. “My name’s John Ford. I make Westerns," that man said, "I don’t think there’s anyone in this room who knows more about what the American public wants than Cecil B. DeMille — and he certainly knows how to give it to them . . . But I don’t like you, C.B. I don’t like what you stand for, and I don’t like what you’ve been saying here tonight.” DeMille did not get his way, and the story of that confrontation has passed into legend, one that I referenced to show my respect for director Eastwood. As is often the case, it was the French who were the first to take him seriously as a directorial auteur. Somewhat bemused by their enthusiasm, he is reported to have told a 1986 gathering of Continental admirers at the Cannes Film Festival that "movies are fun, but they are no cure for cancer." Apparently grounded and without a lot of celebrity pretensions, Eastwood's not out to change the world. He's just doing his best to reflect what he sees in it with some accuracy and considerable honesty.

See also: Chris Hedges's January 25, 2015, posting to the website truthdig headlined Killing Ragheads for Jesus offers an eloquent, if negative, analysis of American Sniper. Hedges is the author of 2009's Empire of Illusion: The End of Literacy and the Triumph of Spectacle, one of the best books I've read in this century.