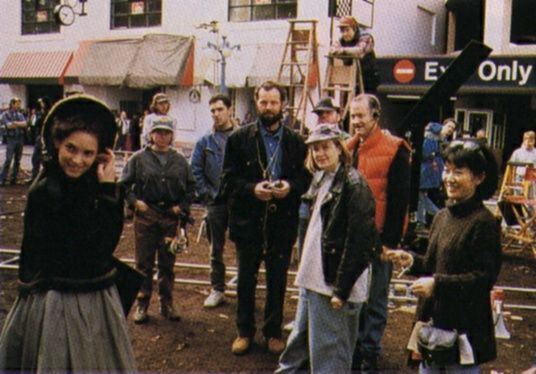 
The young and the restless


In Part 5 of a 20-part series, Reeling Back continues The Greater Vancouver Book's Feature Film Festival, with restored notes on the 17 features in the program called Youthquakes.

THIS IS YOUR PROGRAM guide to a series of 20 movie retrospectives. Together, they include all of the theatrical feature films made in Vancouver and in release as of June, 1995. (Our current program does not include made-for-TV pictures.) Though we've tried to be as complete as possible, we've almost certainly missed a few. If you know of any, please let us know. [Readers of this website who wish to get in touch with additions or corrections can reach me by using the Reeling Back Contact Me button.]
Our notes on each picture include its title (and any alternate titles), its year of release, the director, leading players and a brief description.
Our show continues with . . .

THE MAJORITY OF MOVIE-goers are between the ages of 16 and 30 years old, a statistic that accounts for the production of a lot of pictures by, for and about the young. For beginning movie-makers, it's often a matter of filming what they know. For commercially-minded professionals, it reflects an appreciation of the market potential of films that speak to the concerns of people in their teens and twenties. Anxious youths are featured in such Vancouver-made movies as:

THE BITTER ASH (1963; d. Lawrence Kent) with Alan Scarfe, Lynne Stewart, Phillip Brown. Made with a University of B.C. student cast and crew, Kent's directorial debut drama offered an angry, despairing portrait of a newspaper typesetter (Scarfe) and a would-be playwright (Brown) lost in a world of sex and drugs. Made for just $5,000, the black-and-white feature was screened on college campuses across Canada, where it upset censors and encouraged Kent, who was working as a Pacific Press printer at the time, to produce . . .

SWEET SUBSTITUTE (1964; d. Lawrence Kent) with Robert Howay, Angela Gann, Carol Pastinsky. Reuniting his UBC team, Kent tells the story of an intense, randy, high-school graduate (Howay), and the girl he leaves pregnant. Released in the U.S. as CARESSED, where it was sold as a sex-exploitation film, Kent's second feature channeled the director's angry worldview into a teenaged coming-of-age drama.

WHEN TOMORROW DIES (1965; d. Lawrence Kent) with Pat Gage, Douglas Campbell, Neil Dainard. Moving on to domestic melodrama, Kent cast Gage as a discontented matron who attempts to recapture her youth by returning to school and having an affair with her English instructor (Dainard). Kent's third feature (and his first made from the female perspective) won the Vancouver International Film Festival's 1966 Centennial Prize ($1,000). In the late 1960s, Kent moved to Montreal. He continued making movies, including the 1973 comedy Keep It In The Family, with Pat Gage in a starring role.

EXPLOSION (1970; d. Jules Bricken) with Don Stroud, Gordon Thompson, Michele Chicoine. An American draft dodger (Thompson) meets a Vancouver hippie (Stroud), an association that ends in robbery and murder. The first Vancouver feature made with Canadian Film Development Corporation money, this rebel-youth epic was produced by Montreal-born Julian Roffman. A former National Film Board director, Roffman had previously tried making features in Toronto, producing The Bloody Brood (1959) and The Mask (1961), Canada's first (and, for many years, only) 3-D feature.

THE LIFE AND TIMES OF CHESTER ANGUS RAMSGOOD (1970; d. David Curnick) with Robert Matson, Mary-Beth McGuffin, Michael Storgeoff. Set on the comfortable West Side, this gentle romantic farce tells the story of a love-smitten teen (Matson) and his elaborate schemes to impress his would-be girlfriend (McGuffin) and her ultra-Scots parents. Former school teacher Curnick brought whimsy rather than anger to his $17,000 attempt to follow Larry Kent's example and make a Vancouver feature with cast and crew members drawn from the University of B.C. community.

CARNAL KNOWLEDGE (1971; d. Mike Nichols) with Jack Nicholson, Art Garfunkle, Candice Bergen, Ann-Margret. Two white guys (Nicholson, Garfunkle) spend most of their lives chasing girls (Bergen, Ann-Margret) and talking about sex in a boomer generation drama written by cartoonist and playwright Jules Feiffer. Nichols, already an Oscar winner for his 1967 feature The Graduate, brought his A-list Hollywood cast to B.C. on the advice of director Robert Altman, who'd made his 1969 feature That Cold Day in the Park in Vancouver.

IN PURSUIT OF . . . (1972; d. Richard Walton) with Rex Owen, Cecilia Smith, Celine La Freniere. Girls' school students learn about life and love in this upbeat, mildly moralistic romantic comedy.  Filmed around Jericho's Spencer mansion, this lost Vancouver feature was a vanity project directed by Richard Walton, a successful American businessman who was quoted as saying that he always wanted to make a movie. He came to Vancouver and did so with a local cast and crew. Neither the director nor his film have been heard from since.

LADIES AND GENTLEMEN, THE FABULOUS STAINS (1982; Lou Adler) with Diane Lane, Laura Dern, Marin Kanter. An all-girl punk rock band finds fame, endures shame and plays Seymour Street's Penthouse, all in the name of artistic rebellion. Primarily known as a record producer, Lou Adler's only previous director credit was the 1978 Cheech and Chong comedy Up in Smoke. Filmed for Paramount Pictures as ALL WASHED UP, his punk-rock musical did not receive wide release.

OUT OF THE BLUE (1982; d. Dennis Hopper) with Linda Manz, Sharon Farrell, Dennis Hopper, Raymond Burr. The Easy Rider director used Vancouver East locations for the story of a disturbed, abused teen (Manz) who faces up to the bitter fact that her family is terminally dysfunctional. Also known as CE BE and NO LOOKING BACK, the film's production was as troubled as its characters. Originally to be directed by Winnipeg's Leonard Yakir, it lost its "official" Canadian nationality when American Dennis Hopper took over the independent production.

HOUSEKEEPING (1987; d. Bill Forsyth; based on the 1980 novel by Marilynne Robinson) with Christine Lahti, Sara Walker, Andrea Burchill. Orphan sisters (Walker, Burchill) given into the care of an eccentric aunt (Lahti) are faced with a choice between freedom and conformity in this gentle serio-comic fable. Working for Columbia Pictures, Scottish director Bill Forsyth cast local teen actors Walker and Burchill to co-star opposite Oscar-nominee Lahti on scenic locations in Nelson and Castlegar, complementing Vancouver studio interiors.

CROOKED HEARTS (1991; d. Michael Bortman; based on the 1990 novel by Robert Boswell) with Peter Berg, Vincent D'Onofrio, Jennifer Jason Leigh, Peter Coyote. Domesticity in the 1980s is seen through the eyes of a Tacoma college dropout (Berg) who returns home to the bosom of a thoroughly dysfunctional family. An M-G-M release, this depressing drama has Vancouver playing what was becoming an increasingly familiar role, a city in Washington state.

THE AIR UP THERE (1994; d. Paul M. Glaser) with Kevin Bacon, Charles Gitonga Maina, Yolanda Vazquez. Vancouver was among the many location shooting stops for globe-trotting director Glaser during the making of this Disney subsidiary Hollywood Pictures comedy about a college basketball coach (Bacon) recruiting young talent in Africa.

LITTLE WOMEN (1994; d. Gillian Armstrong; based on the 1868 novel by Louisa May Alcott) with Winona Ryder, Gabriel Byrne, Susan Sarandon, Trini Alvarado, Claire Danes, Kirsten Dunst. While their father is away fighting for the Union, the March sisters (Alvarado, Ryder, Danes, Dunst) help their mom (Sarandon) keep the home fires burning. Victoria and North Shore Studios interior sets were used for the Columbia Pictures remake of the oft-filmed tale of cozy Massachusetts sisterhood during the U.S. Civil War.

GOLD DIGGERS: THE SECRET OF BEAR MOUNTAIN (1995; d. Kevin J. Dobson) with Anna Chlumsky, Christina Ricci, Polly Draper. In the summer of 1980, a big city kid (Ricci) finds a friend and confidant in Wheaton, Washington's local wild child (Chlumsky). Director Dobson gave this Universal Pictures teen buddy movie a twist by casting young women in the principal roles. He shot it in and around the B.C. Interior towns of Nelson and Pemberton, with interior filming at North Shore Studios.

The above is Part 5 of a 20-part restoration of a Greater Vancouver Book article by Michael Walsh originally published in 1997. For additional information on this archived material, please visit my FAQ.