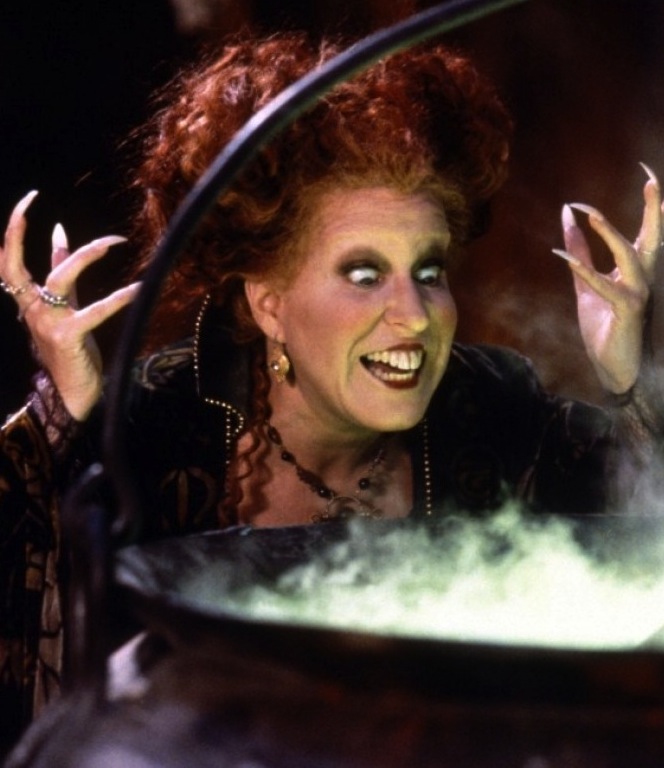 Bette Midler makes a meal of her role as a Salem witch brought back from Hell in Hocus Pocus.

Witch one on Hallowe'en?


Our film in focus is Hocus Pocus


Hallowe'en is our season of choices. Who to be? What to wear? Which goodie to take from the bowl by the door? Or, in the case of Reeling Back, which films to recall on this day of dark fantasy? At first, we considered following up on our mid-October Stephen King package and going with some of the horror classics from the 1970s, such as The Exorcist and The Omen. Then we noticed that both pictures were about the devil, and thought about focusing on Satan. Which reminded us that witches, not demons, are more closely associated with All Hallows' Eve. From there, it was but a short leap to movies such as 1993's Hocus Focus, in which Hallowe'en itself is a part of the plot. Today (Oct. 31), we'll put that somewhat problematic Bette Midler feature into the candy bowl and, as a surprise treat, a little-known Canadian picture called George's Island (1989), to add pirates to the mix. Friday, we'll recall a couple of Hallowe'en blockbusters, Steven Spielberg's transcendent E.T. The Extraterrestrial (1982), and Tim Burton's utterly original The Nightmare Before Christmas (1993).

Friday, July 16, 1993
HOCUS POCUS. Written by Mick Garris and Neil Cuthbert. Based on a story by David Kirschner and Mick Garris. Music by John Debney. Directed by Kenny Ortega.  Running time: 93 minutes. Rated Mature with the warning "occasional violence." THE CHILD IS DEAD.
Force-fed a magic potion brewed by the Sanderson sisters of colonial Salem, Massachusetts, little Emily Binx (Amanda Shepherd) has the life sucked from her in a ceremony designed to restore youth to that trio of Satan's handmaidens. The sisters plan a similar fate for all of the town's children.
What's  wrong  with   this picture?
Hocus Pocus, a snarky shock comedy from Walt Disney Pictures, opens with the ritual murder of a child. Though the sequence is played for laughs, when it ends the child is dead, a small corpse slumped in a straight-backed armchair.
If you're a sophisticated Hollywood screenwriter, you'll argue that the sisters are punished almost immediately. Torch-bearing villagers drag the cheerfully unrepentant Winifred (Bette Midler), Mary (Kathy Najimy) and Sarah (Sarah Jessica Parker) to the gallows.
The sophisticate points out that it's all background information setting up a present-day plot in which teenaged Max Dennison (Omri Katz) accidentally brings the three witches back from Hell for a modern Hallowe'en celebration. We see 17th century witches reacting to the 1990s.
Hey, I should lighten up and recall the broad comic performances, the cartoon-like violence and the really terrific special effects. And it is funny when the rodent-toothed Winifred sets off after Max's smart-mouthed kid sister Dani (Thora Birch).
"I always wanted a child," she says with a wicked grin. "And now I think I'll have one. On toast!"
Listen, say the publicists, Hocus Pocus is a hoot. It's "in the tradition of Disney live-action comedy classics."
What's  wrong  with these  guys?
Divorced from reality in the land of sunscreen and cellular phones, they make it up as they go along. Hocus Pocus is in the tradition of American-International's adolescent exploitation movies, raw schlock for the drive-in audience.
A little parental guidance is needed here. Mom and Dad should be aware that the Disney company that Walt built now has three production units.
Touchstone Pictures takes credit for its tonier adult releases, like What's Love Got To Do With It and next week's Another Stakeout. Hollywood Pictures, the dirty movies division, produces pictures such as Guilty As Sin.
Walt Disney Pictures remains in the family entertainment business, handling the animated features and live-action fare that is supposed to be suitable for small children. Prior to Hocus Pocus, ritual murder was not a "Disney tradition."
Nor, for that matter, was the tasteless muddling of actual religious belief with fairy-tale melodramatics. Whatever other faults he may have had, the late Walt Disney never betrayed the faith of little kids or their parents.
Gone are those days. Tasteless insensitivity passes as humour everywhere and for all ages.
No stranger to scary stuff, Stephen King collaborator Mick (Sleepwalkers) Garris teamed with producer David (Child's Play) Kirschner to come up with a mass market horror comedy. Thereafter, a lot of A-list talent laboured hard to make it sing.
Off-beat and often out of tune, director Danny (Newsies) Ortega's Hocus Pocus may have some future as a midnight cult attraction. Just don't mistake it for family entertainment.

AFTERWORD: I realize that I come off as something of a scold in my concern for the kids in the audience. Today, it's easy to see a picture like Hocus Pocus as a precursor to the awfulness of so-called "reality television," where tasteless insensitivity is part of the job description. On the other hand, it also stands as a transitional work, a film that attempts to re-image some standard pop culture themes. One year before Hocus Pocus, we had the example of Buffy the Vampire Slayer, the feature film that would open the way for Joss Whedon's seven-season, game-changing television series. Disney, the corporate entity that gave us Hocus Pocus, is the parent of  ABC Studios, which is currently co-producing Once Upon a Time. Now in its third season, that television series is re-imagining the folk and fairy-tale characters from the entire Disney library. Today's kids have some challenging choices in their goodies bowl.