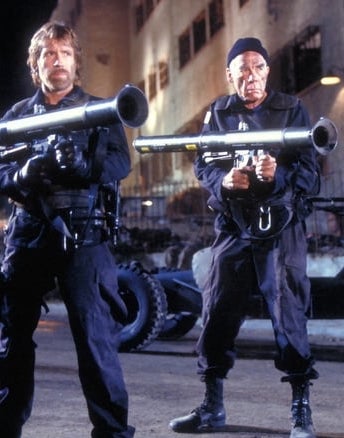 A win for the Gipper


Identifying with the better murderer


It was an Iranian hostage crisis, just not the Iranian hostage crisis. On this day (April 30) in 1980, Khuzestani separatists occupied the Iranian embassy in London. Their action came in the sixth month of the 14-month occupation of the U.S. embassy in Tehran, and just five days after a U.S. military mission to rescue the American hostages had ended in disaster in the South Khorasani desert. A year earlier, there had been a revolution in Iran, one that replaced an autocratic Shah (who had the advantage of being pro-Western) with a theocratic Ayatollah. Confusion about events in the Middle East was only natural as old alliances shifted. In late 1980, Iraq’s Saddam Hussein, Washington’s new best friend and a Khuzestan independence supporter, began an eight-year-long war with Iran. Then there was the Iran-Contra affair, which only complicated things further with the suggestion that the U.S. was arming everybody. Thank goodness for the movies, ever ready to come to our rescue with exciting simplifications that reduced all conflicts to good-versus-evil epics in which white "heroes" take on swarthy "terrorists". Today’s Reeling Back package adds three features to the archive (with links to each following the Afterword to this posting), including director Menahem Golan’s “second chance” for the survivors of that South Khorasani desert disaster, 1986’s Delta Force.

DELTA FORCE. Co-written by James Bruner. Music by Alan Silvestri. Co-written and directed by Menahem Golan. Running time: 129 minutes. Mature entertainment with the B.C. Classifier's warning: some violence, occasional coarse language. ONCE UPON A TIME, a mission was mounted to free American hostages in Iran. It involved the men of the U.S. army's elite Delta Force and, in real life, it was a disaster.
The decision to abort the mission had already been taken when, at 2:30 on the morning of April 25, 1980, explosions rocked the rescue team's desert staging area some 575 km south-east of Tehran. Eight American servicemen were killed, and James Earl Carter's presidency was fatally wounded.
In reel life, those servicemen turn out to have been betrayed by bureaucratic bunglers. Says embittered mission survivor Scott McCoy (Chuck Norris): "I spent five years in Vietnam watching them do the planning and us do the dying."
In reel life, the Delta Force gets a second chance. Their benefactor is a wild-eyed fanatic named Abdul (Robert Forster). A self-styled "commander" in the New World Revolutionary movement, he boards American Travelway Airline's flight 282, Athens to Tel Aviv, and hijacks it to Beirut.
When Abdul, with his even nastier-looking lieutenant Moustafa (David Menahem), make their move, Fort Bragg's own boys in black swing into action. Recalled by presidential decree, retired Capt. McCoy joins dour-looking Col. Nick Alexander (Lee Marvin) and all his old buddies in their determination to win one for the Gipper.
Director Menaham Golan is one filmmaker who never makes the same mistake twice. Nine years ago [1977], when he decided to make a movie about a successful hostage rescue, he found himself in a three-way race with a pair of American television networks.
Though his picture, the Israeli-made Operation Thunderbolt (1977), was the best movie, the telefilms Raid on Entebbe and Victory at Entebbe featured all-star casts.They also made more money, a lesson not lost on Golan when he began issuing tickets for ATA's flight 282.
When Abdul looks about the 707's cabin for Jews to torment, his eyes will light upon the Kaplans, Ben (Martin Balsam) and Edie (Shelley Winters), the Goldmans, Harry (Joey Bishop) and Sylvia (Lainie Kazan), and young mother Debra Levi (Susan Strasberg).
While General Woodbridge (Robert Vaughn) keeps vigil in Washington, pilot Roger Campbell (Bo Svenson) keeps the plane on course and stewardess Ingrid Harding (Hanna Schygulla) attempts to stay calm. Father William O'Malley (George  Kennedy) makes common cause with his Jewish brethren.
A formulaic suspense thriller punctuated by bursts of violence, Golan's picture is an unappealing cross between his own previous rescue epic and Hal Needham's cartoonlike commando fantasy Megaforce (1982). Here, the point is neither docu-drama nor energetic action entertainment, but a kind of sour-souled striking out and back at what many Americans consider national humiliations.
There is a moment, near the end of the movie, when McCoy faces the evil Abdul one on one. From a dramatic point of view, it is the climactic, personal confrontation between psychopathic terrorist and uniformed killing machine.
It would have been a lot more effective if Golan had convinced me that McCoy was not just the better murderer but a better man. His failure to do so makes his Delta Force a particularly grim fairy tale.

Afterword: Just as the British army had an elite force known as the SAS (Special Air Service) for derring-do missions, the U.S. made much of its army’s Delta Force, a Ranger unit charged with combating terrorism. As the movies made clear, they could be deployed anywhere deemed to be under threat. American policy-makers would rather we not think too deeply about the implications of that assumption. Nor should we ponder how resistance, nationalism or patriotism might be defined as terrorism, depending upon who you are, or where you might be in the world.
Instead, we’re encouraged to enjoy the fireworks orchestrated by directors such as Menahem Golan. From a financial point of view, his Delta Force was a success, and two sequels followed. Delta Force 2: The Colombian Connection (1990), featured Norris fighting the war on drugs, while  Delta Force 3: The Killing Game (1991) returned to the problem of Muslim miscreants.
History has not been kind to these elite military units. Their real-life achievements over the years have been less exciting as film fodder, while their failures were just embarrassing. Fanboys — women had little interested in such screen fare — moved on to the ever-more fantastic tales of superheroes tasked by secret government agencies to battle supervillainy in all its manifestations. Which, I have to admit, eliminates the need to appreciate the differences between former Persian provinces in the real world.