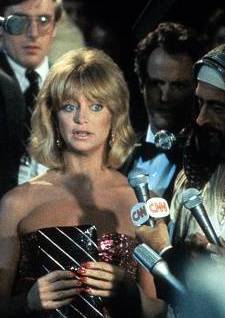 Her patriotism is no joke


Getting involved and getting informed


Cinema’s “serious” takes on such events as the April 30, 1980 Iranian embassy siege are not to be be believed. Surprisingly, there’s more truth about U.S. Middle Eastern policy offered in a Goldie Hawn comedy, director Herbert Ross’s 1984 romantic comedy Protocol.

PROTOCOL. Written by Buck Henry. Based on a story by Charles Shyer, Nancy Meyers and Harvey Miller. Music by Basil Poledouris. Directed by Herbert Ross. Running time: 93 minutes. Mature entertainment. AS A RULE, POLITICS and performers don't mix. Filmgoers have every right to suspect trouble when a star decides that he or she has something to say, and has the box-office clout to say it on film.
Sometimes the results are unintentionally funny. Civics lessons from the likes of Alan Alda (The Seduction of Joe Tynan), Tom Laughlin (Billy Jack Goes to Washington) or John Wayne (The Green Berets) tend to mistake sincerity for sophistication.
Sometimes the results are not nearly funny enough. Goldie Hawn's post-Watergate comedy, Protocol, is a case in point. Hawn, a star who now executive-produces her own pictures, wants Americans to get involved in their government.
As encouragement, she offers the parable of Sunny Anne Davis, a capital city cocktail waitress ripe for a spot of consciousness-raising. One night, following her shift at Lou's Safari Club, Sunny inadvertently foils an attempt on the life of the visiting Emir of Ohtar (Richard Romanus ).
The next day, Sunny is a national celebrity. Her winningly all-American ease before the TV cameras starts wheels turning in the minds of some professional manipulators attached to the State Department.
Before you know it, ambitious Ambassador St. John (Gail Strickland) and cynical Mr. Hilley (Cliff De Young) are arranging to trade blonde Sunny to the Emir for the right to build a military base in his Middle Eastern kingdom.
Sunny, despite all her experience with the lowlifes down at Lou's, doesn't pick up on their nefarious sex-trafficking scheme until it's all but too late.
No, it doesn't really wash. But then, screenwriter Buck (First Family) Henry always was more interested in gag situations than credible characterizations. Here, he creates in Sunny a character with no coherence at all.
Introduced as a young woman who suffers from anxiety attacks, she alternates between moments of appealingly solid frontier shrewdness and total bubble-headedness. When she finally admits that she is 35, the idea that she is a full-grown adult concerned about the protection and preservation of the American Constitution comes as something of a shock.
Despite occasionally funny bits, Protocol is messy rather than moving. Taking on politics as if it were the Pepsi Challenge, Herbert Ross seems to have spent his time directing traffic rather than a movie.

Afterword: Though not known for her political activism, Goldie Hawn was at the centre of two socially aware features in 1984. Swing Shift, director Jonathan Demme’s tale of home-front feminism during the Second World War, confused audiences by featuring the comic actress in a dramatic role. Protocol, a comedy not on board with American meddling in the Middle East, did better. Its story was conceived by Hawn, who told the New York Times that ''I wanted to make a positive movie about our great country, and all we were promised.’’ Her inspiration was Frank Capra’s 1939 Mr. Smith Goes to Washington, and was in the tradition of court jesters — Hawn had been a regular on the 1960s NBC-TV series Laugh In  — speaking truth to power.
That tradition gained real momentum when Jon Stewart took charge of cable channel Comedy Central’s The Daily Show in 1999. He took television news as his satirical target, in the process launching the careers of such like-minded, politically-aware comedians as Steven Colbert, John Oliver and Samantha Bee. Fun fact: In 2013, Stewart took a break from The Daily Show to direct his first feature film, Rosewater, based on the true story of Iranian journalist Maziar Bahari’s 118-day detention in Tehran’s Evin Prison. The picture was not a comedy.