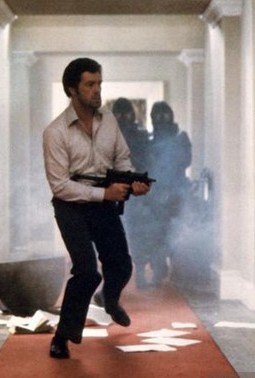 
It was an Iranian hostage crisis, just not the Iranian hostage crisis. On this day (April 30) in 1980, Khuzestani separatists occupied the Iranian embassy in London. Their action came in the sixth month of the 14-month occupation of the U.S. embassy in Tehran, and just five days after a U.S. military mission to rescue the American hostages had ended in disaster in the South Khorasani desert. A year earlier, there had been a revolution in Iran, one that replaced an autocratic Shah (who had the advantage of being pro-Western) with a theocratic Ayatollah. Confusion about events in the Middle East was only natural as old alliances shifted. In late 1980, Iraq’s Saddam Hussein, Washington’s new best friend and a Khuzestan independence supporter, began an eight-year-long war with Iran. Then there was the Iran-Contra affair, which only complicated things further with the suggestion that the U.S. was arming everybody. Thank goodness for the movies, ever ready to come to our rescue with exciting simplifications that reduced all conflicts to good-versus-evil epics in which white "heroes" take on swarthy "terrorists". Today’s Reeling Back package adds three features to the archive (with links to each following the Afterword to this posting) director Ian Sharp’s 1983 reimagining of that siege of Iran’s embassy in London, The Final Option.

THE FINAL OPTION. Written by Reginald Rose. Based on George Markstein’s 1981 novel The Tiptoe Boys. Music by Roy Budd. Directed by Ian Sharp. Running time: 125 minutes. Restricted entertainment with the B.C. Classifier's warning: frequent violence. IN MAY, 1980, SIX heavily armed Khuzestani terrorists occupied the Iranian embassy in London's Princes Gate district. After five days of fruitless negotiations and one hostage death, the British government sent in troops of the SAS (Special Air Service), The Final Option.
Forty-three minutes later, the incident was over. Among the local residents following the drama on television was a 57-year-old movie producer named Euan Lloyd.
The man responsible for such recent military romances as 1978’s The Wild Geese and 1980’s The Sea Wolves, Lloyd knew a natural scenario when he saw one. With a few judicious changes, real life-and-death events could be repackaged as a B-movie plot.
To punch it up for the picture-show crowd, Lloyd acquired the rights to George Markstein’s pulp novel, The Tiptoe Boys, and hired his old friend Reginald Rose to do the screen adaptation. Instead of a lot of boring old Middle Eastern fanatics, the villains of his piece would be members of Britain’s domestic disarmament lobby.
Although Rose has at least one high-level government official allow that "the vast majority of the peace movement are sincere pacifists," we are shown rotten eggs like free-loving Frankie Leith (Judy Davis) and Rod Walker (John Duttine) plotting mayhem from within.
And just who is this Andre Malek (Aharon Ipale), the swarthy foreigner we see lurking about with his red passport and attache case stuffed full of thousand-pound notes?
While these Commie-symps and their dupes are demonstrating in the city, the super-fit lads of the SAS are out in the boondocks training, training, training. Indeed, Capt. Peter Skellen (Lewis Collins) trains so zealously that he gets cashiered.
Off he goes, straight to the local radical chic cabaret, where he falls into the arms of the sinister People's Lobby, and into the bed of the compliant Ms Leith. Under the dull direction of Ian Sharp, the old rogue cop plot is even more crude and obvious than usual.
The bad guys are planning to crash a party at the American embassy. There, they will hold Ambassador Harrison Franklin (Don Fellows), U.S. Secretary of State Arthur Currie (Richard Widmark), U.S.A.F. General Ira Potter (Robert Webber) and British Foreign Secretary Harold Staunton (John Woodnutt) to ransom.
Their mad demand is the destruction of the Holy Loch submarine base by cruise missile. To keep recent recruit Skellen loyal to the cause, a lethal lady named Helga (Ingrid Pitt) is across town holding a gun on his wife Jenny (Rosalind Lloyd).
Lensed in Britain as Who Dares Wins ( the motto of the SAS), Lloyd's unimaginative and mechanical movie connected with post-Falklands war euphoria across the pond. Despite its trite plot and cardboard characters, it became a big British boxoffice success in 1982.
Now called The Final Option (the better to reflect the U.S. military’s obsession with systems planning), it arrives here just behind press reports that former Hollywood B-movie actor and current American President Ronald Reagan likes it a lot. Filmgoers can take that both as a guide to the picture's political posture and its value as entertainment.

Afterword: Admittedly the politics of the actual Iranian embassy siege were complicated. The perpetrators were Khuzestani Arabs whose goal was the independence of their province from Iran, a nation with a Persian majority. The hostages represented the revolutionary government in Tehran, who were at war with Iraq when the film went into production in September 1981. While true, all that historic background was dramatically a non-starter for British-born producer Euan Lloyd.
He’d made money with 1978’s The Wild Geese, a testosterone-rich tale of English mercenaries on a mission somewhere in Africa, so it made sense to capitalize on the recent urban adventure involving the SAS. What made no sense at all was turning a version of the respected Campaign for Nuclear Disarmament into the villain of the piece. Though director Ian Sharp argued that his film involved the DND being “infiltrated by the terrorists,” the subtlety was almost certainly lost on its target audience.