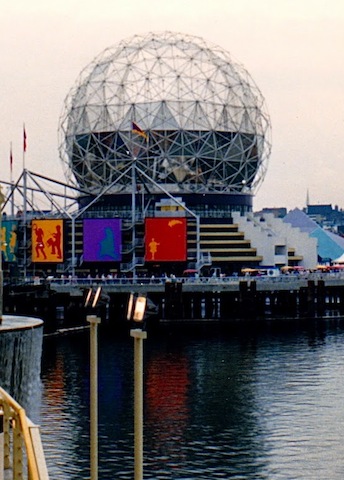 Opened May 2, 1985, Vancouver's Expo Centre served as the OMNIMAX venue during the fair, and has been Science World, an educational entertainment centre, ever since.


It doesn't get any bigger than IMAX


The seventh item in Reeling Back's 38-part series on the cinema of Expo 86 looks at two films premiered at the fair by Canada's own producer of giant screen specialty films, the IMAX Corporation. The immersive entertainment experience is the subject of our feature called Expo 86 IMAX.

AN IMAX PROJECTION BOOTH feels like the bridge of an aircraft carrier. The projector is nearly as big as a Volkswagen, and the area of its screen is equal to that of a full-sized tennis court with enough space left over to park five cars.
The operative word here is big. Canada's contribution to large-format cinema, IMAX is the motion-picture system that maximizes the size of the image.
Based on the principle that a bigger picture is a sharper picture, IMAX cameras use 70mm film stock and run it past the shutter horizontally. This produces a postcard-sized image, a movie frame that is three times larger than regular vertical-pull (standard theatrical) 70mm.
This, in turn, produces a huge, clear picture on the IMAX theatre screen. The illusion of reality is so intense that the Canada Pavilion has taken the precaution of supplying its 530-seat CN IMAX Theatre with motion-sickness bags.
A recent innovation, IMAX was developed by Graeme Ferguson, Robert Kerr and Roman Kroitor, a team that came together at Canada's National Film Board. As a group, they worked on Labyrinth, the NFB's multi-screen Expo 67 production. Shortly after, they recognized the potential in a new projection mechanism invented by an Australian named Ron Jones.
First demonstrated at Osaka's Expo 70,  IMAX found a permanent home in Toronto's Cinesphere, the 27-metre-high triodetic dome that dominates that city's Ontario Place entertainment centre. A spectacular addition to urban science museums and entertainment complexes, more than 35 custom-built IMAX theatres are now [1986] in operation around the world.
Many feature the even more imposing OMNIMAX, a projection system that uses a fish-eye lens to fit the IMAX picture to a dome-shaped screen. Vancouver's Expo Centre, opened last May 2, [1985] is an OMNIMAX venue, and it will present director Michel Brault's 20-minute A Freedom to Move for the run of the fair.
Making its world premiere at the new CN IMAX Theatre is Colin Low's Transitions, the first live-action IMAX film shot in 3-D. Commissioned by the Canadian National Railway, Low's picture uses Expo's transportation theme to demonstrate the breathtaking potential of this new stereoscopic screen process.
IMAX will remain a permanent feature of Canada Place following Expo 86. The future of the Expo Centre's OMNIMAX installation is, as yet, undecided.

Afterword: Designed by Expo 86's chief architect, Trail, B.C.-born Bruno Freschi, the Expo Centre was opened in 1985 to offer Vancouverites a preview of  the fair to come. Although the 17-story triodetic dome, known to locals as "the golf ball," was slated for demolition when the show closed, a citizen's group lobbied for its preservation as an educational science centre. Extensively renovated, it reopened on May 6, 1988 as Science World. The facility retained its 400-seat theatre that boasted the largest OMNIMAX domed screen in the world, a distinction it retains to this day. Earlier in this series, I wrote about the IMAX 3D process, and will have more to say following my review of the Canada Pavilion film, director Colin Low's Transitions.