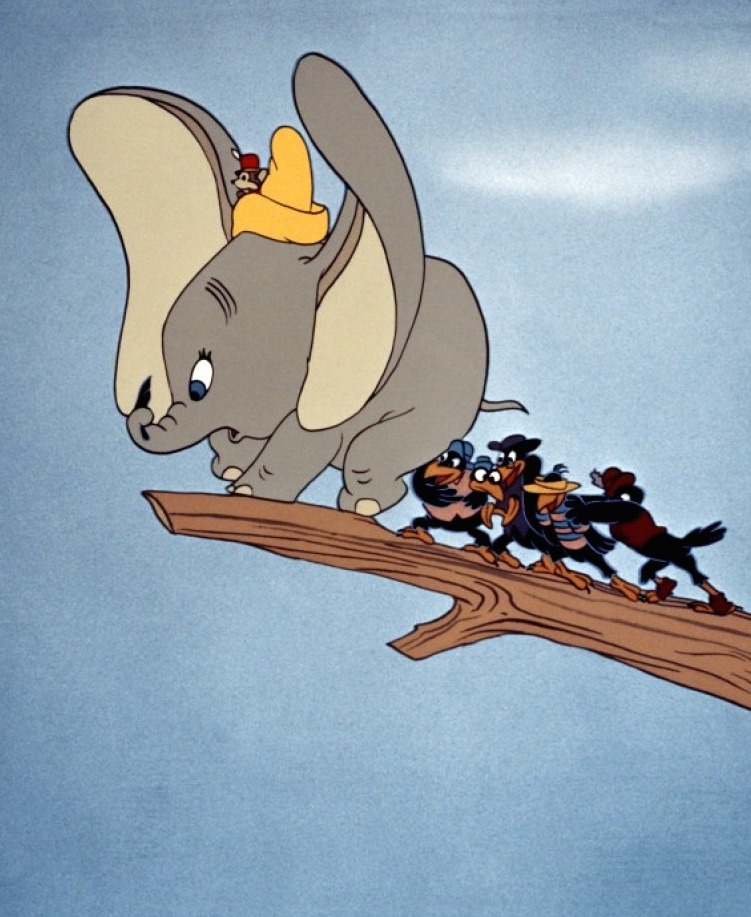 With a little help from his friends, Jumbo Jr. prepares to launch himself into history in the 1941 Walt Disney cartoon classic Dumbo.

I saw an elephant fly!


A product of its time; a timeless classic

DUMBO. Re-release of the 1941 animated feature. Screen story by Joe Grant and Dick Huemer. Based on the 1939 book Dumbo, the Flying Elephant by Helen Aberson and Harold Pearl. Music by Frank Churchill and Oliver Wallace. Supervising director, Ben Sharpsteen. Running time: 64 minutes. General entertainment. DUMBO IS A CLASSIC that should need no introduction. The shortest of the Disney cartoon features — 64 minutes running time — it was hailed by contemporary critics and audiences alike.
The story of a little circus elephant with outsized ears, it is one of the most beautifully realized of the studio’s pictures. In his 1973 book, The Disney Features, Leonard Maltin recalls that one critic wrote that Dumbo had "more camera angles than Citizen Kane.”
The fourth of Disney’s cartoon features — it followed 1939’s Snow White and the Seven Dwarfs, Pinocchio (1940) and Fantasia (1940) — Dumbo was the first to tell its story in a contemporary — 1941 — American setting. In doing so, it recalled the works of L. Frank Baum rather than the Brothers Grimm.
Its title character is an elephant child born to Mrs. Jumbo (voiced by Verna Felton), a performer in a travelling circus. Because Jumbo Jr. is burdened with those big ears, he’s mocked and renamed “Dumbo.” Separated from his mom, he’s made the central joke in the show’s clown act.
Befriended by the Jiminy Cricket-like Timothy Q. Mouse (Edward Brophy), Dumbo ultimately turns his difference into an advantage, soaring to heights of celebrity and happiness. A musical, the animated feature has at least two sequences that have a permanent place among the all-time great cartoon scenes.
One is the Pink Elephants on Parade fantasy. Surreal and mildly disturbing, it begins with Timothy and Dumbo getting drunk on a bottle of champagne abandoned by the clowns. Perhaps inspired by the abstract Toccata and Fugue sequence that opens Fantasia, Disney’s artists created an hallucination of shape-shifting pachyderms that is, well, intoxicating.
(Just 10 years later, the studio again demonstrated its talent for the phantasmagorical with 1951’s Alice in Wonderland. Today [1976], that film has been embraced by the counterculture generation as a psychedelic classic.)
Then there is the now-controversial When I See An Elephant Fly number. Immediately following Pink Elephants, Dumbo wakes up in a tree some distance from the circus. How did he get there?
A quintet of singing, dancing crows — led by the cigar-chomping Jim (Cliff Edwards) — speculate on the possibilities. In his pioneering 1968 book The Disney Version, critic Richard Schickel called it “the one distasteful moment in the film. The crows who teach Dumbo to fly are too obviously Negro caricatures.”
It’s been argued that the portrayal of the crows is both stereotypical and a subversion of the stereotype. What’s really worth noting is that Jim and his mates are the most positive characters in the story, both sympathetic to the marginalized Dumbo’s plight, and the agents of his ultimate success.
A picture that deserves its classic status, Dumbo is a film that delights the first time and remains fresh every time.

Afterword: With a running time of 112 minutes, director Tim Burton’s Dumbo “remake” is almost twice as long as the animated original. The most recent of the Disney cartoon features to be recycled as a live-action (albeit much aided by computer-generated images) movie, it goes its own way, according to all the pre-publicity.
Burton’s picture is not a musical, nor do the animals in it talk. The focus is on the human characters and their relationships, rather than the title character’s problems. No longer set in the “present time” of the 1941 cartoon, it harkens back to 1919 and memories of the First World War.
I’ve been a Tim Burton aficionado since he rocked the screen world with his 1988 examination of bio-exorcism, Beetlejuice, and I’m sure there’s much to admire in his version of Dumbo. It’s certain that we’ll see an elephant fly. We just won’t hear his song.