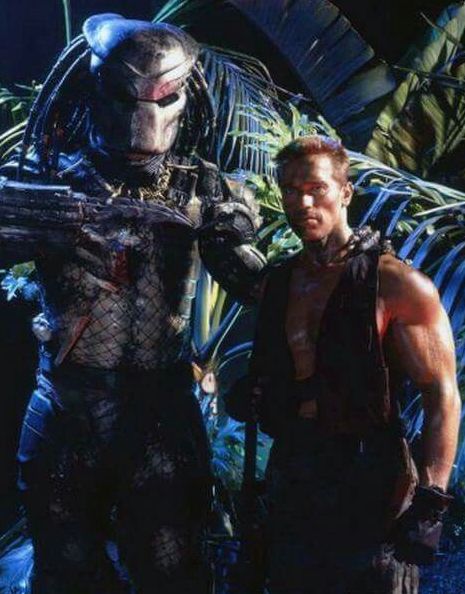 The alien killer (Kevin Peter Hall) and Major Dutch Schaefer (Arnold Schwarzenegger) take a break from their fight to the death to pose for a publicity photo for director John McTiernan’s 1987 feature Predator.

“It bleeds. We can kill it”


Your basic mano a monstro movie


Like every dog, it seems as if every science-fiction film franchise must have its day. Star Wars fans celebrate 5/4, or May the Fourth, which is a play upon the Jedi greeting “may the force be with you.” Star Trek Day is September 8, which was the broadcast date of the original TV show’s first episode in 1966. In Japan, November 3 is Godzilla Day, recalling the date that the original feature premiered in Tokyo in 1954. No surprise, then, that 20th Century Fox is promoting today (April 26) as Alien Day. Wade Watts-level trivia buffs will instantly recognize 4/26 as a reference to LV-426, the planetoid where Sigourney Weaver’s Ellen Ripley first met the hostile Xenomorph in director Ridley Scott’s 1979 film. Their encounter rejected the optimistic tone set by such new generation moviemakers as Steven (Close Encounters of the Third Kind) Spielberg and George (Star Wars) Lucas. Alien was a return to the dystopian horrors familiar to those with some memory of the first-contact sci-fi features of the 1950s. In the years since, audiences have had a choice of possible futures, some miraculous, others monstrous. Today, Reeling Back adds four alien-infested titles to its archive (with links to each following the Afterword to this posting). Director John McTiernan attempted to create a parallel series to the Alien franchise with his 1987 creature feature Predator.

PREDATOR. Written by Jim Thomas and John Thomas. Music by Alan Silvestri. Directed by John McTiernan. Running time: 104 minutes. Restricted entertainment with the B.C. Classifier’s warning: some gory violence. TRY TO SEE IT from the creature's point of view. His kind have been hunting in these parts for, oh, ages.
Major Dutch Schaefer (Arnold Schwarzenegger) and his team are the real interlopers here. American servicemen,  they've been airlifted into . . . into where?
Well it's a jungle, and the natives speak Spanish. There's some blather about borders and guerillas, a suggestion of CIA involvement and a reference to Russian advisors. I guess it's supposed to be Central America, but no one comes right out and says so.
What we do know is that Schaefer's group has been brought in at the behest of Agent Dillon (Carl Weathers), and that they are do-gooders. "We're a rescue team,” the plainspoken Schaefer says. “We're not assassins.”
In need of rescuing is a friendly cabinet minister who's been taken hostage by unfriendly forces. Like the location, the reason for their mission and the identity of the bad guys is kept annoyingly vague.
All that we really need to know, of course, is that our heroes are seven heavily-armed dudes who enjoy kicking ass in the service of their country. In other words, they're perfect prey for a sports-loving extra-terrestrial Predator.
Try and see it from director John McTiernan's point of view. An artist who cut his teeth on television commercials, he made his feature debut with 1985’s Nomads, a stylish urban thriller that made a bigger impact with international critics than with audiences.
With Predator, he takes his best shot at the boxoffice. He's offering action-exploitation fans his version of Rambo Meets Darth Vader. Cast as humankind's designated hitter is former bodybuilder Schwarzenegger, Hollywood's most muscular leading man.
Stalking him is this year's candidate for best supporting monster, Kevin Peter Hall. Already a front-runner for his portrayal of the gentle Sasquatch in Harry and the Hendersons [1987], the seven-foot Hall shows his sinister side playing a nameless alien hunter from space.
Known in the immediate neighbourhood as “the demon who makes trophies out of men,” the critter's advantages include a chameleon-like ability to blend with the environment and heat-sensitive vision. There's room here for lots of tricky photographic effects and point-of-view shots.
Hero Schaefer is not impressed. “It bleeds,” he says resolutely. “We can kill it.”
McTiernan, a director willing to make schlock out of schlock, plays directly to the mayhem market here. One by one, Schaefer's Loony Tunes teammates are eliminated as the picture moves towards the inevitable single combat, mano a monstro.
His Predator is strictly for blood-sport freaks and weapons fanciers.

Afterword: John McTiernan’s Predator resulted in a new sci-fi film franchise for 20th Century Fox. To date, there have been two sequels — 1990’s Predator 2 and Predators (2010) — with a third, The Predator, scheduled for release in September 2018. Inevitably, Fox’s two major monsters met, the result being a 2004 crossover confrontation, Alien vs. Predator, followed by their rematch in Alien vs. Predator: Requiem (2007). The critters duked it out on Vancouver locations during their 2007 meeting, and the predator returned to town to film its 2018 solo starring role.
An American Film Institute Conservatory alum (class of 1975), McTiernan made his directorial debut with the independent feature Nomads, a 1985 supernatural fantasy that told the story of Inuit trickster demons at large in modern Los Angles. Predator was the first of two features he made with future California “governator” Arnold Schwarzenegger. (Triva fans delight in the fact that future Minnesota governor Jesse Ventura played the gunner on Dutch Schaefer’s Special Forces team.) Schwarzenegger also had the title role in McTiernan’s imaginative comic fantasy The Last Action Hero (1993), a picture that cost a ton of money that it failed to recoup.
McTiernan's blockbuster breakthrough was Die Hard (1988), the action epic that made TV actor Bruce Willis a major star. It also became the second Fox movie franchise launched by Pedator’s director. He worked with Willis again to make Die Hard with a Vengeange (1995), the third in the (to date) five-picture series.
In 1990, he added to his reputation as a franchise founder with The Hunt for Red October, an adaptation of the Tom Clancy spy novel. McTiernan directed Sean Connery and Alec Baldwin in what became a five-picture Jack Ryan series for Paramount Pictures. He reunited with the iconic Connery for 1992’s Medicine Man, a more thoughtful drama that disappointed  filmgoers who’d come to expect testosterone-laced action entertainment  from the director.