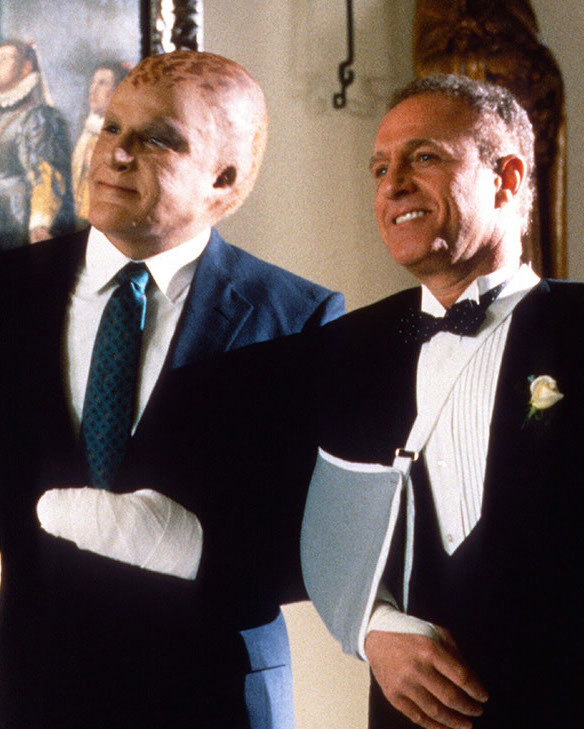 
Cops serve and protect in Slagtown


Like every dog, it seems as if every science-fiction film franchise must have its day. Star Wars fans celebrate 5/4, or May the Fourth, which is a play upon the Jedi greeting “may the force be with you.” Star Trek Day is September 8, which was the broadcast date of the original TV show’s first episode in 1966. In Japan, November 3 is Godzilla Day, recalling the date that the original feature premiered in Tokyo in 1954. No surprise, then, that 20th Century Fox is promoting today (April 26) as Alien Day. Wade Watts-level trivia buffs will instantly recognize 4/26 as a reference to LV-426, the planetoid where Sigourney Weaver’s Ellen Ripley first met the hostile Xenomorph in director Ridley Scott’s 1979 film. Their encounter rejected the optimistic tone set by such new generation moviemakers as Steven (Close Encounters of the Third Kind) Spielberg and George (Star Wars) Lucas. Alien was a return to the dystopian horrors familiar to those with some memory of the first-contact sci-fi features of the 1950s. In the years since, audiences have had a choice of possible futures, some miraculous, others monstrous. Today, Reeling Back adds four alien-infested titles to its archive (with links to each following the Afterword to this posting). Hopeful in its outlook is director Graham Baker’s 1988 buddy-cop tale set in the near future of an Alien Nation

ALIEN NATION. Written by Rockne S. O’Bannon. Music by Curt Sobel. Directed by Graham Baker. Running time: 91 minutes. Rated 14 Years Limited Admission with the B.C. Classifier’s warning: some violence, very coarse and suggestive language. ITS ELEMENTS MAY INSPIRE deja vu. Reduced to essentials, Alien Nation is a cop show.
It’s the familiar story of a lawman determined to avenge the death of his partner. He has little use for his new partner, a member of the minority group currently benefitting from affirmative action opportunities.
The story turns on the fact that their murder investigation exposes a major criminal conspiracy. They'll discover a terrible secret involving an addictive substance that necessitates a pedal-to-the-metal car chase.
Familiar elements can, of course, be used in inspired ways. A combination of sharp direction, solid casting and imaginative scripting elevates Alien Nation above the ordinary to produce something engagingly new in action entertainment.
Det.-Sgt. Matt Sykes (James Caan) serves and protects in the Los Angeles of 1991. His longtime partner is killed in a shootout in "Slagtown," the urban ghetto that houses the 300,000 humanoid Tenctonese, or “Newcomers,” whose off-course spaceship landed on earth three years previously.
Sykes's new partner is Samuel Francisco (Mandy Patinkin), the first Newcomer on the force to make detective grade. The villain, they learn, is William Harcourt (Terence Stamp), a Newcomer entrepreneur with a plan to reintroduce Jaahbro’Kah ("a sweet indulgence from our past") to Slagtown's inhabitants.
In his crackerjack screenplay, fantasist Rockne S. O’Bannon creates a race of extra-terrestrial boat people, non-humans with a different physiology and a disconcerting adaptability. Information about them is skilfully woven into natural, often-funny dialogue exchanges that both advance the plot and the police partners' relationship.
Under the direction of British-born Graham (The Final Conflict) Baker, Slagtown comes to life as a distinct society with its own language and problems.
Making the drama work are the spot-on performances of the principals, actors Caan, Patinkin, Stamp and Leslie Bevis (cast as a seductive Newcomer nightclub dancer with a taste for human males).
Alien Nation is a confident, convincingly crafted tale of future cops.

Afterword: There were more stories to tell. Though 20th Century Fox did not see Alien Nation as a feature-film franchise, it did continue it as a prime-time series on its new Fox TV network. It’s hard to know what part the single-season (1989-1990) show played in the evolution of story acs in mid-1990s American television, but it was popular enough to inspire five subsequent made-for-TV movies. Broadcast between 1994 and 1997, all featured actor Gary Graham as Matt Sykes, and Eric Pierpoint as his Newcomer partner George Francisco. Building upon the theatrical film’s immigrant-assimilation metaphor, the TV spinoff increased the importance of Det. Francisco’s home life. Unlike the feature, in which his wife and son were among the bit players glimpsed in the background, Susan Francisco (Michelle Scarabelli), son Buck (Sean Six) and newly added daughter Emily (Lauren Woodland) were all members of the principal cast. In addition to its challenging ideas, the show featured some of the most interesting music being written for TV. In a rare instance of producer involvement, series creator Kenneth Johnson composed the Alien Nation theme,  a fine example of Tenctonese rock.
In an interesting coincidence of names, the screenplay for director Ridley Scott’s original Alien feature is credited to St. Louis, Missouri-born Dan O’Bannon. Since he’d based it on a story he’d co-written with his friend Ron Shusett, the St. Louis, Missouri-born Dan has bragging rights on the creation of the subsequent Alien franchise. The screenplay for Graham Baker’s 1988 Alien Nation was the work of Rockne S. O’Bannon, who went on to create the the 1989 TV series spinoff in collaboration with writer-producer Kenneth Johnson. The Los Angeles-born Rockne is nine years younger than Dan, and they have no apparent kinship.
They are brothers, though, in the fellowship of sci-fi innovators. Together with his USC classmate John Carpenter, Dan wrote the screenplay for their 1974 debut feature Dark Star. His credits after Alien include such genre landmarks as 1981’s cartoon feature Heavy Metal, the high-tech thriller Blue Thunder (1983), the first-contact shocker Lifeforce (1985) and the Philip K. Dick adaptation Total Recall (1990). Rockne’s achievements have been on the television side. His sci-fi series creations after Alien Nation include the three-season SeaQuest DSV (1993-1996), the four-season Farscape (1999-2004) and the three-season Defiance (2013-2016).