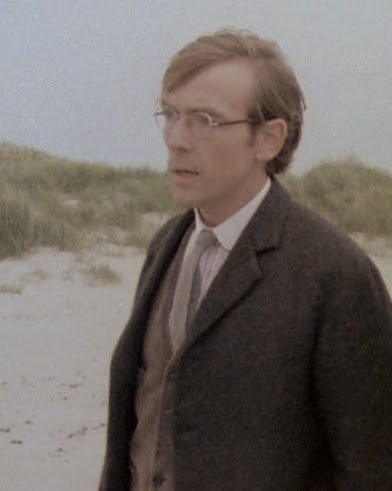 Stephen Dedalus (Bosco Hogan) awaits guidance from the Almighty in director Joseph Strick’s 1977 drama A Portrait of the Artist as a Young Man.

A snob born to sneer


Profiling one dull and dreary fellow


“Looking at Joyce recently,” media theorist and James Joyce scholar Marshall McLuhan wrote in a 1987 letter. “A bit startled to note that the last page of Finnegans Wake is a rendering of the last part of the Mass. Remembered that the opening of Ulysses is from the first words of the Mass. The whole thing is an intellectual Black Mass.” A Canadian of Scots-Irish descent and a lover of language, McLuhan often celebrated the bardic tradition and the “gift of gab” conferred on the sons of Erin by the famous Blarney Stone. I expect that he also celebrated Bloomsday, the annual commemoration of Joyce and his works that’s held today (June 16) around the world. Observed since at least 1924, it takes place on the date Joyce chose to set the events of his novel Ulysses: June 16, 1904. It takes its name from the book’s central character, Leopold Bloom, the Dubliner whose memorable Thursday features a series of mundane encounters that mirror those of the mythological Greek hero. Considered a modernist literary landmark, it was also at the centre of the most famous obscenity trial in U.S. history. Given his influence on the arts, it’s surprising how few filmmakers have attempted to bring Joyce’s work to the screen. Today’s three additions to the Reeling Back archive (with links to each following the Afterword to this posting) include independent producer-director Joseph Strick’s adaptation of Joyce’s fictionalized autobiography A Portrait of the Artist as a Young Man.

A PORTRAIT OF THE ARTIST AS A YOUNG MAN. Written by Judith Rascoe. Based on the 1916 novel by James Joyce. Music by Stanley Myers. Directed by Joseph Strick. Running time: 98 minutes. Mature entertainment with the B.C. Classifier's warning: occasional nudity. JOSEPH STRICK IS ONE director who is not afraid of long speeches. In 1967, the year he brought James Joyce's controversial novel Ulysses  to the screen, he allowed Molly Bloom's famous soliloquy to go on for 23 minutes.
Molly meant trouble for Strick. It wasn't how long she talked, but what she had to say that caused problems. Among the reasons Ulysses was notorious as a banned book were the sensuous lady's sexual recollections.
The movie caused a minor sensation when it was first released. Overall, though, the comments were favourable. One of the people most captivated by it was long-time New York Times film critic Bosley Crowther, who included it among the "50 landmark movies" discussed in his valedictory tome, The Great Films.
So encouraged, Strick maintained his fascination with Joyce and in particular with the Irish author's literary alter ego, Stephen Dedalus. A would-be poet, young Dedalus turns up to play Telemachus to Leopold Bloom's Odysseus in Ulysses.
Strick's current film, A Portrait of the Artist as a Young Man, is based on Joyce’s first published novel. In his 1916 work, the author is completely concerned with the forces that shape the Dedalus character and, like Ulysses, it is set in pre-First World War Ireland.
Nor has Strick lost his love of long speeches. Portrait is divided in two by a lengthy oration that remains the film’s dramatic highlight.
A sermon on the subject of hellfire, it is delivered with sulfurous conviction by Sir John Gielgud,  in a guest appearance as an unnamed visiting preacher. Gielgud’s speech is the pivotal point in Stephen’s story.
In the section that goes beore it, we are introduced to a generally cheerless, sponge-like child unenthusiastically absorbing the incidents and influences that will colour his later thinking. His story begins in 1885. Three-year-old Stephen (Terrence Strick), the son of Irish country gentleman Simon Dedalus (T. P. McKenna, remembered for playing Buck Mulligan in Ulysses), is disciplined for bed-wetting.
In 1891, an older Stephen (Luke Johnston) is sent to boarding school, where his owlish manner seems to provoke cruelty among his teachers and mates. Political and financial reverses cause a change in his father's fortunes, and when we meet the adult Stephen (Bosco Hogan), he is on his way to a bankruptcy auction in the city of Cork.
Despite a public face that is both pious and studious, we see that Dedalus is actually tormented by private doubts and lust. As a university student, he finally satisfies his sexual curiosity by going to a young Dublin prostitute. Nearly a year and many transactions later, he attends the visiting priest's lecture on damnation.
Prior to this scene, screenwriter Judith Rascoe's Dedalus is virtually mute. Afterwards, though, he begins to open up. He goes to confession. For a time he considers the idea that he might, himself, have a calling to the priesthood, and prays for appropriate guidance.
Guidance is not forthcoming. Resentful, Dedalus becomes an insufferable intellectual snob. He spends the rest of the movie lecturing to his friends and, when they finally stop listening, to his diary.
Sample exchange: "It's curious how your mind is supersaturated with a religion that you say you disbelieve," a friend tells him. "Will you not become a Protestant, then?"
"I said that I'd lost The Faith," Dedalus replies. "Not that I'd lost my self-respect."
What Strick is trying to do, of course, is illuminate the great gulf between what Dedalus has been taught and what he has managed to learn. These are the words and ideas of Joyce, and they produce an absorbing if distant dialectic.
In bringing them to the screen, Strick uses the same spare, astringent style that he developed for Ulysses, a style shorn of cinematic flash and as austere as Dedalus himself. The result is a film that is emotionally hollow.
Hogan's performance, though effective, is notably lacking in warmth. Filmgoers will have to strain to catch any sense of humanity in his icy hauteur. "You're a born sneerer, Stevie," a friend tells him.
A sneerer he is. And for all of his logic, Strick's Stephen Dedalus is quite unpleasant. For all of its serious intentions, A Portrait of the Artist as a Young Man profiles a dull and dreary fellow.

Afterword: In common with Marshall McLuhan, producer-director Joseph Strick identified as a passionate Joycean. In common with Russ Meyer, his film school was the U.S. Army, where he served as an aerial photographer during the Second World War. His first commercial film was the cheerful 1948 short Muscle Beach, shot on the California coast with a military-surplus 35mm camera. Film historians credit it with influencing both Britain’s free-cinema movement and the U.S. direct cinema genre. In the mid-1950s, frustrated by the barriers he encountered in the film industry, he decided "to leave the business to make some money so that I could make my own movies.” Having studied physics at the University of California before the war, Strick was a success as a high-tech entrepreneur, founding and profiting from the sale of four companies between 1956 and 1960.
He made his return to independent production with the 1960 docudrama The Savage Eye, then indulged his taste for testing social boundaries with The Balcony (1963), an adaptation of Jean Genet’s tale of life in a brothel in a country experiencing a revolution. Then it was on to Ulysses, a picture he intended to shoot in an 18-hour version, faithful to every word of the Joyce novel. When financing that ambitious a film proved impossible, he settled on the 132-minute feature that became a such a censor magnet when the Molly Bloom character said on screen exactly what she'd said in the book. Less controversy attended the release of Strick’s 1970 adaptation of Henry Miller’s sexually-charged Tropic of Cancer, probably because Hollywood had its new rating system in place and could consign the picture to the X-rated ghetto.
And then it was 1971. When bad-boy Strick made the investigative anti-war documentary Interviews with My Lai Veterans, his industry colleagues gave him an Academy Award for it. As a producer, he’d demonstrated his ability to offer up fine family fare — director Jack Couffer’s Ring of Bright Water (1969) — and his second Joyce adaptation, 1977’s A Portrait of the Artist as a Young Man, was hardly provocative at all. It wasn't Strick who'd changed, though, so much as Strick having changed the world around him. Comfortable with what he’d achieved, he counted among his producer credits director Caroll Ballard’s poetic, made-in-B.C. feature Never Cry Wolf (1983). Joseph Strick died in Paris in 2010 at the age of 86.