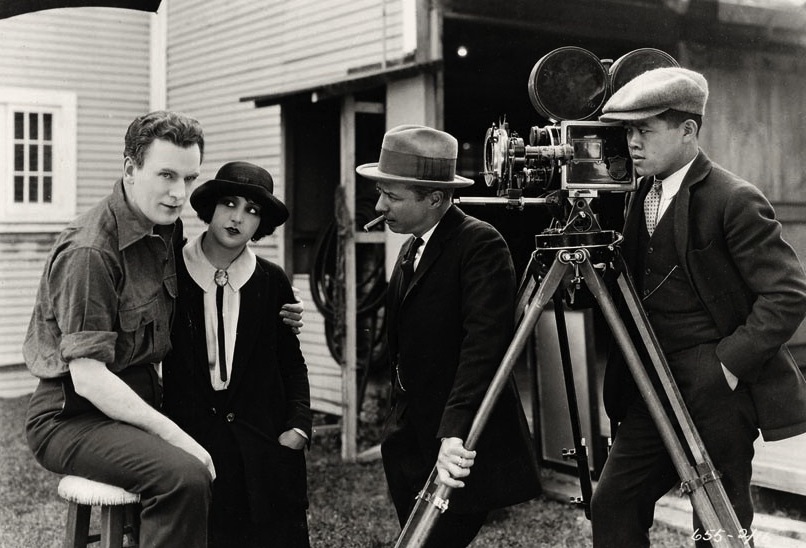 
Reeling Back to the Silent era


In Part 1 of a seven-part series, Reeling Back recalls the beginning of feature film-making in Canada's Hollywood North, with notes on nine pictures made before the coming of sound.

FEATURE FILMS MADE IN VANCOUVER AND BRITISH COLUMBIA
Prepared for Chuck Davis and The Vancouver Book — August,  1975

WE KNOW FOR SURE that the first permanent movie house built In Canada was opened in Vancouver. The year was 1902 and the theatre, called The Edison Electric, did business on Cordova Street.
We know for sure that one of Canada's finest feature film-making facilities [in 1975] sits on the North Shore overlooking the city and the sea. Called Panorama Studios, it was opened in 1962.
What we don't know and, sad to say, may never know, is precisely how many feature films have been made in whole or in part here in British Columbia.
What follows is an attempt to construct a title-by-title history of feature film-making in this city and this province. Although it is the most comprehensive listing yet produced, it is almost certainly Incomplete.
Few businesses are as chancy as the movie business. Features can be made without ever being seen. Features can be seen without being remembered or reported upon.
Among the films listed below are a number of projects that the average moviegoer has never heard of nor ever had the chance to see. And I'm sure that there are others.
I'm also sure that among the readers of The Vancouver Book there will be people with specific personal knowledge of those lost films. Both Chuck Davis and I agree that this bit of local history is worth recording and updating in future editions. We would appreciate hearing from anyone with additions or corrections. Please write to me, Michael Walsh, in care of Chuck at The Vancouver Book. [Readers of this website who wish to get in touch with me with additions or corrections can reach me by using the Reeling Back contact button.]

THE GROUND RULES: What follows is a list of feature films (films of an hour or more in length), made for commercial release. It is divided into three parts.
1.    Films made in whole or in part in British Columbia, other than in and around Vancouver;
2.    Films made in whole or in part in and around Vancouver;
3.    Miscellaneous notable films.
Notes on the individual films are arranged chronologically by year and follow the style of the Pacific Press newspapers' TV movie listings. In each case the title of the film is followed by Its type and the year of its release (or, if un-released, the year of its production).
Technical credits are identified by the following abbreviations: p. (producer); d. (director); w. (screenwriter); ph. (cinematographer); m. (music); and l.p. (leading payers).
Finally, a brief plot synopsis and additional interesting Information is offered.

FOR MORE THAN 50 years Vancouver and British Columbia have been In love with film. For the most part, that love has been unrequited. This, In sketch form, is the story.


BRITISH COLUMBIA FILMS - The Silents
(Features produced in whole or in part on B. C. locations other than Vancouver)

THE CONFLICT (adventure-romance, 1921): p. Carl Laemmle; w. George C. Hull, based on the novel by Clarence Buddington Kelland; d. Stuart Paton. l.p. Priscilla Dean, Edward Connelly, Hector Sarno, Martha Mattox, Herbert Rawlinson. Following the death of her father, a young woman (Dean) goes to live with her lumber baron uncle (Connelly), only to come into conflict with his sinister housekeeper (Mattox). She flees, finding herself in the middle of a land-rights dispute between her uncle and an attractive young man (Rawlinson).
Filmed on location in and around the East Kootenay town of Cranbrook by Universal Films, The Conflict is the first feature shot in B.C. to appear in the historic record.

HEARTS AFLAME (adventure-romance, 1923): p. Louis B. Mayer; w. J.G. Hawks, Gordon Rigby, based on the 1922 novel Timber, by Harold Titus; d. Reginald Barker; l.p. Frank Keenan, Anna Q. Nilsson, Craig Ward, Stanton Heck. Sent by his father (Keenan) to buy a timber lot from a young woman (Nilsson), a young man (Ward) falls in love and becomes her protector from his dad's predatory partner (Heck).
Having discovered Cranbrook and nearby Fort Steele, U.S. filmmakers returned to the East Kootenay for several working visits during the silent film era, often to set the woods on fire as they did for Hearts Aflame. Also known as TIMBER.

THE ALASKAN (adventure-drama, 1924): p/d. Herbert Brenon; w. Willis Goldbeck; l.p. Thomas Meighan, Estelle Taylor, Anna May Wong, Charles Ogle. Unable to get the government to help when his father, a gold-rush pioneer, is murdered by agents of a large company, a young man (Meighan) fights on alone, finding love (Taylor) along the way.
Based on a 1923 novel by James Oliver Curwood, this American-made picture included in its cast Charles Ogle, who had the distinction of being the screen's first Frankenstein's monster (in Thomas Alva Edison's 1910 release, Frankenstein). Behind the camera was one of Hollywood's best know cinematographers, James Wong Howe.

THE FLAMING FOREST (western, 1926): w. Waldemar Young; d. Reginald Barker; l.p. Antonio Moreno, Renee Adoree, Gardner James, William Austin, Oscar Beregi. Faced with a rebellion led by a half-breed brigand (Beregi), the Dominion government sends in a Northwest Mounted Police sergeant (Moreno), who falls in love with a settler's daughter (Adoree), and eventually saves the day.
Based on a 1921 novel by James Oliver Curwood that purports to tell the tale of the 1869 Riel Rebellion, this M-G-M feature was shot on locations in Montana and around Fort Steele in B.C.'s East Kootenay. Historical inaccuracies abound in the book and screenplay.

POLICING THE PLAINS (documentary, 1927): w/p/d/ph, Arthur David "Cowboy" Kean, based on the book by Roderick George MacBeth; l.p. Dorothy Fowler, Jack Boyd, Miss Lougheed, Bill Faron. Described as a history of, and a tribute to the RCMP, this is the first recorded instance of a Canadian feature being made In B.C. Kean, a Vancouver-born moviemaker, shot It on location in Alberta and around Kamloops between 1925 and 1927.

WINDS OF CHANCE (adventure-drama, 1925): p/d. Frank Lloyd; w. J.G. Hawks, based on Rex Beach's 1918 novel The Trail of '98; l.p. Ben Lyon, Anna Q. Nilsson, Viola Dana, Victor McLaglen. A gold rush tale in which the hero (Lyon) loses all in a shell game and becomes involved with a married woman (Nilsson). Leaving Alaska for Dawson City, he is framed for robbery by her husband and later implicated in the husband's murder.
Retracing the location work done a year earlier for The Alaskan, a U.S. film crew shot this outdoors picture in Banff, Alberta, and Lytton, B.C., with some location work in North Vancouver's Capilano Canyon.

THE WILDERNESS PATROL (western, 1928): w. Ford Beebe from the novel by Harold Blindloss; d. J.P. McGowan; l.p. Bill Cody, Shannon Day, J.P. McGowan, Lotus Thompson. Little more than the title is known about this western about a Mountie that starred the Winnipeg-born Cody, a screen cowboy who became one of Hollywood's B-movie heroes of the 1930s.
Produced in North Vancouver by British Canadian Pictures Ltd. (a subsidiary of Hollywood's Paramount Pictures established to make "quota quickies" for the British market), the film was optimistically heralded as the beginning of a local film boom. Also known as THE WILDERNESS.
The above is Part 1 of a seven-part restoration of a Vancouver Book article by Michael Walsh originally published in 1976. For additional information on this archived material, please visit my FAQ.

Afterword: When the late Chuck Davis asked me to write the article on feature film-making for his ambitious 1976 urban encyclopedia, The Vancouver Book, I took it as an opportunity to create a list of every feature filmed in whole or in part in our province. Because Davis's subject was specifically Vancouver (and because my piece was one of over 200 features in his 500-page book), we decided to trim the text by more than a third, eliminating more than 40 film titles. This Reeling Back restoration represents the first publication of the entire article. It now includes the films shot outside of Greater Vancouver.