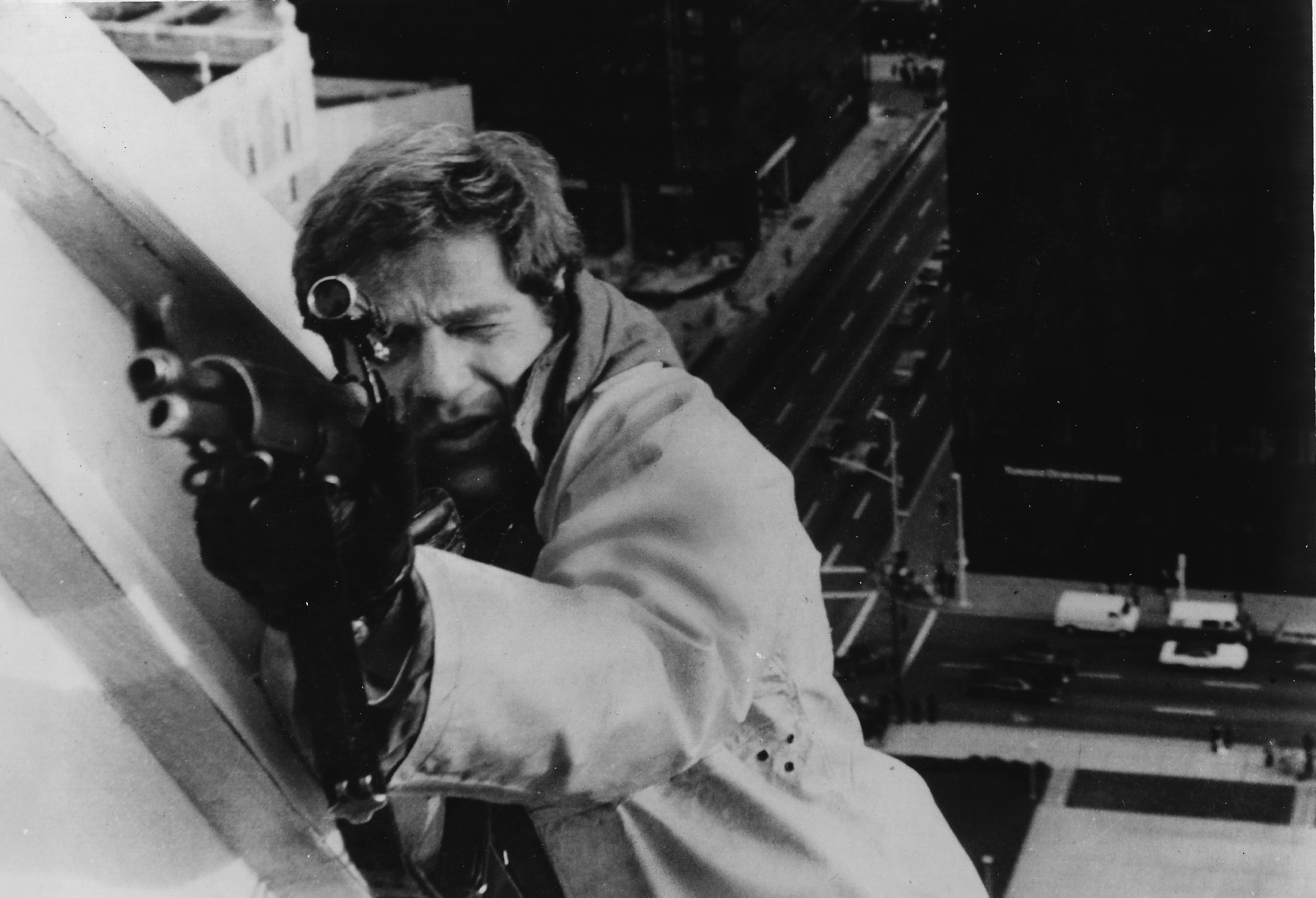 In 1975's Russian Roulette, George Segal plays a Mounted Policeman who targets a political assassin from the roof of the Hotel Vancouver.


In Part 6 of a seven-part series, Reeling Back offers a diverse selection of 14 titles, the domestic and foreign features that are the foundation of Vancouver's modern film industry.

FEATURE FILMS MADE IN VANCOUVER AND BRITISH COLUMBIA
Prepared for Chuck Davis and The Vancouver Book — August,  1975
By MICHAEL WALSH
[PART 6: 1972 - 1975]

IN PURSUIT OF . . . (romance-comedy, color, 1972) w./p./d. Richard Walton; ph. Kelly Duncan; l.p. Rex Owen, Cecilia Smith, Celine La Freniere. Private girls' school mates (Smith, La Freniere) learn about life and love in this comic love story with an uplifting moral.
Filmed around Jericho's Spencer mansion. Richard Walton was a successful American businessman who said that he always wanted to make a movie. He came to Vancouver, did so, and neither the director nor his film have been heard from since.

SEXCULA (porno-comedy, colour, 1973): p. Clarence Neufeld; d. John Holbrook; w. David Hurry; ph. John Goode; l.p. Debbie Collins, Jamie Orlando, John Alexander, Tim Lowrey. A sex-mad scientist, Fellatenstein (Orlando), constructs Frank (Alexander), a generously-equipped monster designed to satisfy her desires. When Frank fails to function she consults her cousin, the vampire Sexcula (Collins). Together they contrive to arrouse Frank's interest.
This was an attempt to forge ties with the emerging U.S. pornographic film market with a locally-made sex feature. Although its producers failed to make a formal distribution arrangement, a print of their feature was stolen and is rumoured to be in circulation in the U.S.

SUNSHINE (drama, colour, 1973): d. Joseph Sargent; w. Carol Sobieski; l.p. Christina Raines, Cliff DeYoung, Meg Foster, Brenda Vaccaro. A young mother (Raines) discovers that she has an incurable cancer. Rather than allow her leg to be amputated, she decides to die whole.
A U.S. made-for-TV feature, it was released theatrically in Vancouver and overseas. Though not specifically set in Vancouver, Raines is seen to live in Kitsllano and seeks treatment both at the Vancouver General and St. Paul's Hospitals.

THE WOLFPEN PRINCIPLE (drama, colour, 1974): p. Werner Aellen; w./d. Jack Darcus; ph. Terry Hudson, Hans Klardie; l.p. Vladimir Valenta, Laurence Brown, Doris Chilcott, Alicia Ammon, Tom Snelgrove. A movie house manager (Valenta), who is a former concentration-camp inmate, is fascinated by the wolves at the Stanley Park zoo. He joins a mystically-inclined Indian boy (Brown) in a plot to free them.
Though a featured player in his native Czechoslovakia (Closely Watched Trains), this was the doleful Valenta's first starring role in a Canadian-made movie. (He had a supporting role in Tom Shandel's Another Smith for Paradise.) Scenes were shot in West 10th Avenue's Varsity Theatre.

Afterword: Although 1972's In Pursuit of . . . remains unaccounted for in the historical record, Sexcula (1973) has returned from the undead. For many years the subject of rumour and speculation, a print of the film apparently ended up in an Archives Canada storehouse. Finally released on DVD in May 2013, the picture had its Vancouver premiere — a "Special 40th Anniversary Presentation" — on October 25th, 2013, at the Vancouver International Film Festival Centre.