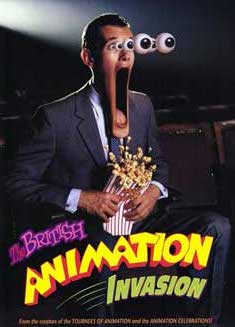 
Arguably the world’s first comic book, Britain’s Comic Cuts made its debut on this day (May 17) in 1890. It only made sense, then, that U.K. artists should have staked their claim to cartoon honours a century later with the 1991 anthology feature The British Animation Invasion.

THE BRITISH ANIMATION INVASION. Anthology feature produced by Terry Thoren.  Running time: 110 minutes. Rated Mature with the B.C. Classifier’s warning: "occasional violence, nudity and coarse language." JOLLY GOOD.
Indeed, if it wasn't for my natural reserve (and a tendency to dignified understatement), I'd venture a "jolly great."
Raise a polite cheer, then, for The British Animation Invasion. It's a bit of all right.
Had my doubts going in, though. "Not another one of those kitbag cartoon features?" I said to myself. "Didn't we just see the Academy Award-winning clay animation cartoon Creature Comforts in the last Spike and Mike package?"
Of course it was nice to see it again. Nice, too, that some lads from the U.K. were able to cop an Oscar [Nick Park for 1990’s best animated short]. But that's yesterday's news, isn't it?
What I didn't know is that the Old Country is absolutely awash in outstanding practitioners of the animator's art. Included in producer Terry Thoren's new collection are two of the best cartoons I've ever seen.
Good on you, Mister Thoren, for finding Next, a literate, stop-motion wonder conceived and directed by Barry Purves. In it, a poor player who looks a lot like Will Shakespeare is auditioning for a non-committal producer.
With the help of a life-sized rag doll, Will mimes his complete works, offering brief, brilliant recapitulations of all 29 plays. An example of style and substance, Purves's playful, breath-taking 5½ -minute film stands up to endless repeat viewings.
So, too, The Night Visitors, a marvellous, magical example of traditional cel animation from Richard Ollive. Combining a graphic style reminiscent of Winsor (Little Nemo) McCay with the dramatic imagination of Maurice (In the Night Kitchen) Sendak, Ollive takes us into a world of nocturnal adventure that recalls storytime in a Victorian nursery.
A pair of outstanding cinematic achievements, they are my favourites among a selection of brilliantly realized items.
Filmgoers with a taste for social commentary might prefer Jollity Farm, David Stone's bouncy, musical celebration of genetic mutation. Or Bluefields Express, from Charlie Fletcher Watson, a film that takes as its text the conflict between Nicaragua's Sandinista government and the U.S.-backed Contras.
Or Going Equipped, Peter Lord's documentary examination of criminal behaviour presented in a style designed to hold the attention of adults or adolescents.
In all, Thoren has gathered together 17 shorts and more than 30 commercial spots produced for English and European television. One comes away in awe of the absolute mastery that a new generation of overseas artists has achieved over an essentially American art form.
The British Animation Invasion is an eye-opening spectacle. Do go.

Afterword: In the U.S., comics historians are generally agreed that the first comic book was the Eastern Color Printing Company’s Famous Funnies, published in July, 1934. The British beg to differ. In their 1967 illustrated history The Penguin Book of Comics, George Perry and Alan Aldridge make the case for Comic Cuts. Founded by Alfred Harmsworth, the halfpenny weekly first appeared on London newsstands on Saturday, May17, 1890. In fact, the bragging rights may belong to the Swiss. The Geneva-born Rodolphe Töpfler published his 40-page Histoire de Mr. Vieux Bois (later sold in pirated English-language editions as The Adventures of Mr. Obadiah Oldbuck) in 1837.
Then there is movie cartoon history. In the penultimate paragraph of my excessively polite review above, I ventured the thought that animation was “an essentially American art form.” In my deference, I neglected to point out that the package on view was the work of an American: cartoon aggregator Terry Thoren. From his Los Angeles home base, he championed the cartoon cause in anthology releases such as The Second Animation Celebration (1989), The National Film Board of Canada’s Animation Festival (1991), and Too Outrageous Animation (1994). Perhaps I should have emphasized the irony of an American lauding the achievements of English (and Canadian) artists.
Truth be told, every country with a national film industry produces cartoons, and can boast a rich history of animation artistry. What I should have noted in the above review was that early in the 20th century "it became an essentially American art form.” Americans, led by artist-entrepreneur Walt Disney, succeeded in turning the art into an industry, and used their international dominance of movie distribution to take over the world. Disney’s studio produced the first cartoon feature, Snow White and the Seven Dwarfs, in 1937 and never looked back. By contrast, the first British animated feature released theatrically was Halas and Batchelor’s 1954 adaptation of George Orwell’s Animal Farm. (And that achievement was somewhat diminished by the 2007 revelation that the production had been funded by the C.I.A.)
Few British cartoon features have been produced, and fewer still have been distributed internationally. Among them, I can recall 1968’s Yellow Submarine (directed by expat Canadian George Dunning), Watership Down (1978) and Plague Dogs (1982), both based on Richard Adams novels and both directed by American Martin Rosen.