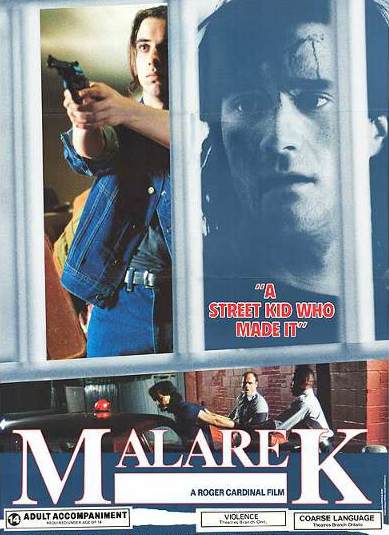 Elias Koteas is featured in the title role and on the theatrical release poster for director Roger Cardinal’s 1988 feature Malarek.

MALAREK. Written by Avrum Jacobson, based on Victor Malarek’s 1984 memoir Hey Malarek! Music by Alexandre Stanke. Directed by Roger Cardinal. Running time: 100 minutes. 14 Years Limited Admission with the B.C. Classifier's warning: some violence, occasional nudity and very coarse language. VICTOR MALAREK (ELIAS KOTEAS) is one hell of a reporter. The first night on the job, he witnesses a murder.
Joining in a high speed chase, the Montreal Tribune’s newest newshound sees a cop shoot an unarmed, underaged fugitive.
It’s a sensational scoop, but the story falls apart when police investigators produce the dead kid’s gun.
Convinced that he saw what he saw, the 22-year-old journalist refuses to let go of it.
In pursuit of the truth, Malarek returns to the mean streets of his youth to ferret out a tale of corruption and cover-ups in the city’s Juvenile Detention Centre.
It happened in 1971, and it’s all true, say the producers  of Malarek. The story of “a street kid who made it,’’ director Roger Cardinal’s uneven urban drama is based on the book Hey Malarek!, the Canadian crime reporter’s 1984 autobiography.
Truth, of course, is subject to interpretation. TV-trained screenwriter Avrum (Degrassi Junior High) Jacobson has turned Malarek’s memoir into a low-rent Lou Grant episode, with the feisty former copy boy playing the Joe Rossi role.
Cardinal, a documentarist and commercials producer with a few undistinguished Québec features to his credit, shaped it in the urban action-exploitation mould.
Like his Après-ski (a softcore sex comedy shown locally as Sex on Skis), Malarek appears to have been improvised on location.
As played by Koteas, Malarek is desperate, arrogant,  devious and determinedly obnoxious. He’s also, according to social worker Harold Stern (Al Waxman), “the most self-righteous bastard I ever saw in my life.”
His bullying, instinctive investigative techniques produce passionate, sensational, but unsubstantiated (and therefore unpublishable) stories.
“Sometimes,” says Moorecraft (Michael Sarrazin), the Tribune’s urbane publisher, “ambitious people take shortcuts.”
Sometimes, unambitious filmmakers take shortcuts as well,  and make true stories utterly unbelievable in the telling. Cardinal, in pursuit of cheap thrills, sets his Malarek down in a B-movie newsroom that owes more to the 1974 comedy Why Rock the Boat? than All the President’s Men (1976).
Kerrie Keane, in her performance as Claire, Malerek’s boss and editor, suggests an unprofessional (and barely credible) personal interest in the volatile young man.
In his performance, Koteas suffers from a series of nasty, violent flashbacks, Cardinal’s overheated way of telling us of the troubles his scrappy, unappealing hero has seen.
The result is truth made to look like pulp fiction.

Afterword: Lou Grant, the television series mentioned in the above Malarek review, ran for five seasons (1977-1982) on the CBS network. Set in the newsroom of the fictional Los Angeles Tribune, it was one of my favourite small screen entertainments. Robert Walden played the scrappy Joe Rossi, the young reporter who always managed to bring city editor Grant (Ed Asner) publishable Page One stories.
The real-life Victor Malarek really was one hell of a reporter. He started out in 1968 as a 20-year-old copy boy with the Montreal-based newspaper supplement Weekend Magazine. Two years later, he signed on as a police reporter with the daily Montreal Star. A year after that, he broke the story that took him into the world of investigative reporting, a sensational tale of teenagers who’d committed suicide in a wretchedly mismanaged juvenile detention centre. In 1976, he was recruited by The Globe and Mail, the Toronto-based daily that considers itself “Canada’s national newspaper.”
By the time that Roger Cardinal turned the reporter's 1984 memoir Hey Malarek! into a feature film, he’d published a second book. Haven’s Gate, Canada's Immigration Fiasco, was based on his reporting on the federal government’s immigration and refugee system. Between 1991 and 1992, the Canadian Broadcasting Corporation aired a TV series called Urban Angel. Also based on Hey Malarek!, it starred Louis Ferreira as Montreal Tribune reporter Victor Torres. Three of its 15 episodes were directed by Roger Cardinal. Its production coincided with Malarek joining the CBC’s weekly newsmagazine The Fifth Estate as a co-host, where he worked on its investigative reports until 2000. The next year, he switched networks, and becoming a senior reporter with the CTV network’s flagship news show W5. In early 2017, after nearly 16 years with the private broadcaster, Malarek retired.