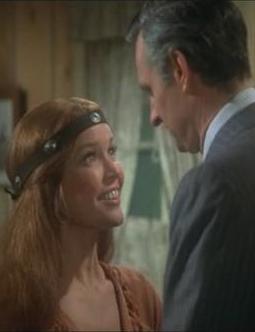 
She is one of just 23 performers to claim acting’s triple crown — an Oscar, a Tony and an Emmy Award. Born on this day (December 7) in 1932, Ellen Burstyn reprised her Broadway triumph on the big screen, co-starring with Alan Alda in director Robert Mulligan's 1978 adaptation of Same Time, Next Year.

Monday,  February 12, 1979.
SAME TIME, NEXT YEAR.  Written by Bernard Slade, adapted from his 1975 stage play. Music by Marvin Hamlisch. Directed by Robert Mulligan. Running time: 119 minutes. Mature entertainment with the B.C. Classifier’s warning: some coarse language. OF COURSE I LIKED Same Time, Next Year. What it comes down to, I suppose, is my basic outlook on life.
I happen to prefer Bernard Slade to Bernardo Bertolucci.
What, you may ask, could the creator of television’s The Flying Nun and the controversial Italian director possibly have in common?
The answer is a story idea.
According to Robert Mulligan, the director hired to bring Slade’s Broadway hit to the screen, "a lot of people dream of having a secret love affair with no responsibility, no strings attached.”
Sound familiar? That's the fantasy Bertolucci explored in his most notorious film, 1972's Last Tango in Paris. Marlon Brando and Maria Schneider met and mated in a deserted walk-up, an affair that had tragic consequences for both of them.
Bertolucci, it would appear, views life as an essentially tragic event.
Slade, a Canadian, takes the opposite view. Life is a comedy.
So is Same Time, Next Year. It is also one of the most delightful movies to come along in an age.
In outline, the plot is surprisingly similar to Last Tango.  George (Alan Alda) and Doris (Ellen Burstyn) meet by accident. The sexual magnetism is overwhelming and they wake up in bed together the next morning.
They continue to meet once a year, same time, same place.
Bertolucci, an "artist," turned his inspiration into a sick and smarmy melodrama. Slade, bless’im, saw not only the humour inherent in such a situation, but the potential for a warm, human love story.
George and Doris maintain their secret relationship for 26 years.
We see their story unfold in six acts, individual vignettes that look in on them every five years or so. Slade uses each act to reflect on the times and show us the couple's personal growth.
They meet on a magic evening in 1951. He is a New Jersey accountant who's come to California on a business trip. She is an Oakland housewife escaping from an unpleasant weekend with in-laws by going off on a religious retreat.
Slade, a long-time television writer, has a talent for quick-witted dialogue and sharp situational comedy. Like Neil Simon, he is able to set up phenomenally fast and funny exchanges.
Unlike Simon, Slade seems to have genuine compassion for his characters. George and Doris are not merely the butt of one another's jokes, they are attractive and real people whose love deepens as they mature..
Slade shows his manipulative skills as well as his feelings in the film's fourth act. It is 1966. The scene, a kind of generational confrontation, is wildly funny, building to a sudden unexpected shock that left me (and half the audience) in tears.
He'd made us care.
Essentially a two-character comedy, it comes to life through the finely-tuned performances of Alan Alda and Ellen Burstyn. Although I've always found him a bit too chilly, she is magnificent as she recreates the role that won her a Tony Award on Broadway.
Indeed, the only sour note is sounded by over-rated Hollywood tunesmith Marvin Hamlisch. Together with lyricists Marilyn and Alan Bergman, he contributes a nothing theme song called "The Last Time I Felt Like This."
If he felt that bad, he should have stayed in bed.

Afterword: Noted in passing in the above review is the fact that Bernard Slade is a Canadian. Born in St.Catherines, Ontario in 1930, he took up acting in his late teens. In 1957, he made his debut as a playwright with a sale to the Canadian Broadcasting Corporation. The Prizewinner, an hour-long comedy about an office worker whose lottery win changes his life, was resold to NBC-TV and launched Slade on a new career. Relocating to Hollywood in the mid-60s, he’s remembered as the creator of such American TV sitcoms as The Flying Nun (1967-1970) and The Partridge Family (1970-1974). His first love remained the theatre, though. In 1975, Slade made his debut as a Broadway playwright with Same Time, Next Year, a hit romantic comedy that featured a Tony Award-winning performance by Ellen Burstyn. He was back on Broadway three years later with the comedy-drama Tribute, a work that was adapted to the screen as a Canadian feature film in 1981.
Slade, who turned 87 in May, represents but one of many Canadian connections in the career of the Detroit-born actress Ellen Burstyn. Her first school was Windsor, Ontario’s St. Mary’s Academy. Among her first performing jobs was as a Montreal nightclub dancer, where she worked under the name of Keri Flynn. Burstyn made her TV acting debut in 1958, and broke through as a movie star in 1971, earning a supporting actress Oscar nomination for her work in director Peter Bogdanovich’s The Last Picture Show. Her Same Time, Next Year nomination was her fourth, following a second in 1974 (for William Friedkin’s The Exorcist) and a 1975 Academy Award win (for Martin Scorsese’s Alice Doesn’t Live Here Anymore).
A fifth nomination recognized her work in Nova Scotia-born director Daniel Petrie’s 1980 drama Resurrection, the story of a woman with preternatural healing powers. A year later, Burstyn was on location in Alberta, Manitoba and the Northwest Territories filming Silence of the North, the story of a Canadian frontierswoman. Her performance, directed by Vancouver-born Allan King, earned her first Genie Award nomination. (She won the Genie in 2008 for her role in director Kari Skogland’s feature film adaptation of Margaret Laurence’s The Stone Angel.)
As Silence of the North went into release, she received the first of her eight prime-time Emmy Award nominations. In 2009, she was a winner (for an episode of Law & Order: Special Victims Unit) and became a triple-crown actress. Still working regularly — she’s completed work on at least two pictures scheduled for release in 2018 — Ellen Burstyn turns 84 today (December 7).