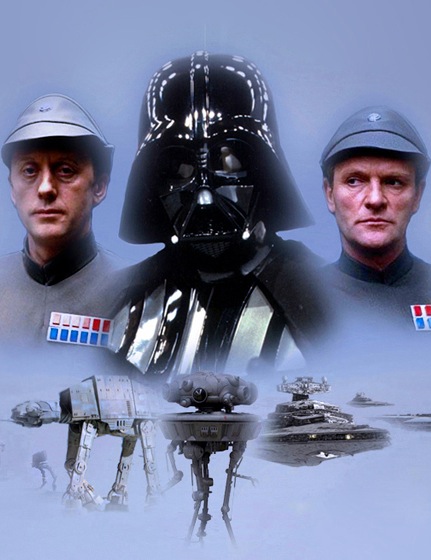 Darth Vader (David Prowse, with the voice of James Earl Jones) will use every weapon at the Empire's disposal in the fight to crush the Rebel Alliance.

Force shows its dark side


Changing the game made Episode V the second


Be careful what you wish for, that oft-quoted scrap of folk wisdom, nicely describes the situation that science-fiction fans faced in the wake of Star Wars. For years, the genre's true believers complained that their favourite form of entertainment got no respect from the mass media. With a few notable exceptions, filmmakers treated techo-tales as either kid stuff or a variation on the horror movie. Hopes for a sci-fi renaissance rose in 1968, following the release of director Stanley Kubrick's big-budget 2001: A Space Odyssey, a film that proclaimed its seriousness for nearly three hours. Blissed out audiences notwithstanding, the film's modest return on its $10.5 million budget was not enough to bring about real change in any major studio's attitude towards the genre. In 1977, A New Hope arose. A film that was nothing like Kubrick's, Star Wars spoke a language the moguls understood. Made on a budget roughly equal to that of 2001, it grossed over $460 million, a box-office bonanza that made it an industry game-changer. Released the same year as Close Encounters of the Third Kind, it redefined sci-fi, and reshaped both the making and marketing of movies. A new era of multimedia franchising was born and, in 1980, delivered The Empire Strikes Back.

Thursday, May 22, 1980.
THE EMPIRE STRIKES BACK. Written by Leigh Brackett and Lawrence Kasdan, based on a story by George Lucas. Music by John Williams. Directed by Irvin Kershner. Running time: 124 minutes. General entertainment in 70mm and Dolby stereophonic sound.
THE STORY THUS FAR: Luke Skywalker, a farmboy on the remote planet of Tatooine, has ambitions of becoming a star pilot and, perhaps, joining the Rebellion against the tyrannical Galactic Empire. Learning from desert hermit Ben Kenobi that his father was a renowned Jedi knight, the orphaned Luke joins Ben, who has been called to aid the Rebellion by Princess Leia Organa, a prisoner of the Empire's fearsome Dark Lord, Darth Vader. Together with smuggler Han Solo, his wookie co-pilot Chewbacca and the robots C-3P0 and R2-D2, Luke rescues the Princess and, in a climactic battle, is responsible for the destruction of an Imperial Battlestation, the Death Star. Vader, however, escapes . . .

DARTH VADER LIVES. Black cloaked and merciless, he leads the attack as The Empire Strikes Back.
Wow!
The Star Wars team has done it again. The new movie is a stunner, an adventure fantasy crammed full of even more action, more plot, more characters and more special effects than the 1977 original.
My first and purest reaction was Wow!
James Harwood, writing in the  current Variety [May 7, 1980] is considerably more eloquent. "It is," he says, "like walking through the front gate of Disneyland."
Three years ago [1977], George Lucas offered filmgoers a story set "a long time ago, in a galaxy far, far away." Together, we journeyed to a place where good and evil were locked in mortal combat, a place that hardcore science-fiction fans were suddenly forced to share with the largest general audience in film history.
Lucas, a "hot" director because of 1973's American Graffiti, had convinced a major studio to gamble on an expensive space opera. He approached the project practically. If Star Wars was conceived as anything more than a one-shot, its publicity campaign wasn't letting on.
Then, much to his banker's surprise, the picture went through the roof. As soon as he had the studio bosses clamouring for a sequel, Lucas revealed that he had a dream.
Star Wars, according to its creator, is not one movie but nine! The project was supposed to be a saga, a trio of trilogies spanning some 40 years in the history of Lucas's own "galaxy far, far away."
The movie that we know as Star Wars is really Episode IV — A New Hope, the title that Lucas says will appear on the film when it is re-released. The current picture, The Empire Strikes Back is Episode V. (Episode VI is to be called Revenge of the Jedi.)
l'm hooked.
I'm no easy mark, mind you. For years I've resisted the dubious charms of television's Star Trek. I've never had the least interest in such fashionable rubbish as Roots, Upstairs, Downstairs or The Forsyte Saga.
Star Wars is something else; a wistful, wonderful thing distilled from dreams, and brought to life by a crew of capable, dedicated craftstmen.  Star Wars is something to believe in.
Now, before you decide that I've become a devotee of The Force, let me say that my belief works in a very down-to-earth way. First, I believe in the Star Wars series as a quality product.
Lucasfilms and the Lucas-owned Industrial Light and Magic special effects house are state-of-the-art companies, reflecting the filmmaker's commitment to his vision. As a consumer, I appreciate the fact that what appears on the screen gives me full value for my money.
Lucas says he's determined that his creation, the Star Wars series, will be top-of-the-line goods. Based on performance to date, I tend to believe him.
My second bit of belief is a little more subtle. Years ago, some pedant said science fiction is the mythology of technological man. George Lucas has proved it.
Myth is defined as the shared cultural heritage of a people. In Jungian terms, it is our collective unconscious, the subconscious experience common to us all.
In Star Wars, Lucas mines that collective unconscious — it contains images from thousands of works of fantasy and imagination — and synthesizes these experiences into a new and familiar dream.
The elements of Luke Skywalker's story echo like a racial memory. He is an orphan, and yet he is special because his father was special. He has a quest, a cause and a destiny. He is a seeker who is discovering truths that are both terrible and wonderful.
Episode V— The Empire Strikes Back opens on the ice planet of Hoth, a rebel base. We learn that Darth Vader (David Prowse, speaking with the voice of James Earl Jones) is obsessed with finding "young Skywalker" (Mark Hamill), one in whom The Force is strong.
An Imperial probe lands on Hoth and we learn that Luke, Han Solo (Harrison Ford) and Princess Leia (Carrie Fisher) are based there. Soon the rebels are under attack and the order is given to evacuate.
Luke, guided by a vision of Ben Kenobi (Alec Guinness), heads for the swamp planet of Dagobah, where he comes under the tutelage of Yoda (voiced by Frank Oz), the tiny, 800-year-old Jedi master. Han and Leia escape in the Millennium Falcon.
While Luke is being initiated into the mysteries of the Force, Han and Leia attempt to elude the relentless pursuit of Vader. During their flight, Leia discovers that she has feelings for the glib space pilot that are more personal than political.
Hang on, fans. Star Wars was just a warm up. The plot is moving now, and it never lets up as screenwriters Leigh Brackett and Lawrence Kasdan take us deeper into both the characters and their situation.
This is the episode in which we hear Leia say "I love you," in which Luke hears the words "I am your father," and in which Ben Kenobi, worried that Luke may be the Jedi's last hope, learns that "there is another."
The action moves just as quickly. This time the movie magicians take us to an ice planet, a jungle planet, through an asteroid belt, aboard Vader's imperial cruiser and into Cloud City, a mining colony suspended in the air, all underscored by John Williams's magnificent music.
Like Walt Disney before him, George Lucas has given up directing to oversee the total enterprise. Taking over in the director's chair is Irvin Kershner, who holds everything together nicely.
They said that Star Wars would be a hard act to follow. Lucas promised that The Empire Strikes Back would be even better.
Believe him.

Afterword: The chroniclers tell us that John Williams was introduced to George Lucas by Steven Spielberg during the production of Star Wars. (The two young filmmakers had known one another as students in the 1960s.) By the mid-1970s, Williams was an established A-list film composer, with 11 Oscar nominations to his credit (including a 1975 win for Spielberg's scary fish movie, Jaws). Lucas, perhaps with the success of his own American Graffiti (1973) in mind, was inclined to use a greatest-hits musical score made up of classical cues. Williams, thank goodness, urged him in the direction of an original score of the sort that Erich Wolfgang Korngold had written for the rousing film swashbucklers of the late 1930s. Using Wagnerian leitmotifs, Williams crafted a soaring operatic score for the new space opera, at the same time spearheading a revival of great symphonic movie music composition. Williams has written the music for every Star Wars feature to date, and is currently working on director J.J. Abrams's untitled 2015 series entry, Episode VII.

See also: My review of Return of the Jedi (1982) and my 1980 interview with Star Wars producer Gary Kurtz.