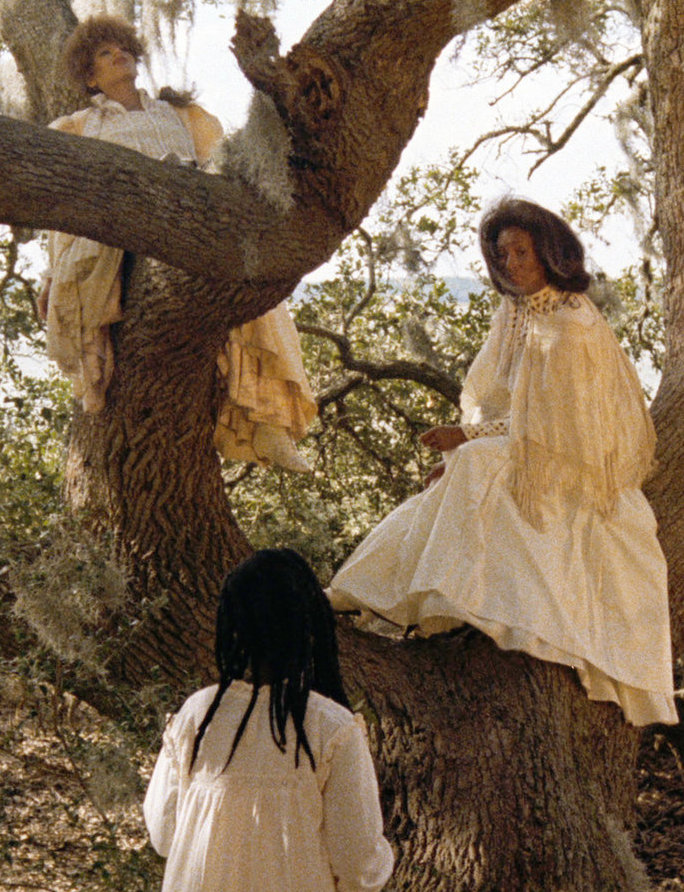 Among those gathered at Ibo Landing are (clockwise from top) Trula (Trula Hoosier), Yellow Mary (Barbara-O) and Eula (Alva Rogers) in writer-director Julie Dash’s 1991 drama Daughters of the Dust.


Satisfaction is in short supply as 2020’s Black History Month ends today (February 29). Despite the fact that a leap year gives the celebration an extra day, there are those who complain that the observation is still consigned to the calendar’s shortest month. As it turns out, no slight was intended. Its origins are in Negro History Week, the creation of African-American historian Carter G. Woodson. First marked in 1926, it occurred during the week that includes the birthdays of great emancipator Abraham Lincoln (February 12) and abolition activist Frederick Douglass (February 14). In 1976, when President Gerald Ford declared the first Black History Month, such February milestones as the 1868 birth of black activist W.E.B. DuBois, the 1870 ratification of the 15th amendment (granting African Americans voting rights) and the 1909 founding of the NAACP were also recognized. Where black achievement does appear to be slighted is in the February Academy Awards ceremonies. An issue underscored by the 2015 creation of the hashtag #OscarsSoWhite, lack of diversity among the nominees continues to be a problem for the U.S. film industry’s most extravagant evening of unchecked self-congratulation. In the month that saw the conviction of movie mogul and serial sex offender Harvey Weinstein on rape charges, women and blacks are still seated at the back of Oscar’s bus. Today’s additions to the Reeling Back archive (with links to each following the Afterword to this posting) recall four landmark moments for black women in the movies, including writer-director Julie Dash’s first feature, the 1991 exploration of family relations, Daughters of the Dust.

DAUGHTERS OF THE DUST. Music by John Barnes. Written and directed by Julie Dash. Running time: 112 minutes. Rated Mature with no B.C. Classifier's warning. IN FAMILY, IT GOES without saying.
It is understood that 88-year-old Nana Peazant (Cora Lee Day) is the great caretaker of memory; that her granddaughter Yellow Mary (Barbara-O) is a bad memory; and that Ibo Landing is a way station between Freedom Year and "the first step to progress."
In families, many things are understood, inferred or just intuited. Family gatherings are often raging storms of experience and emotion invisible to the outsider.
Daughters of the Dust visits the Peazants on August 19, 1902. Writer-director Julie Dash begins by advising us that because of their remote location — the Sea Islands off the South Carolina-Georgia coast — these descendants of the West African Gullah have managed to preserve many ancient customs and rituals.
Thereafter, much goes without saying.
Adopting the style of an African storyteller (rather than a Hollywood moviemaker), Dash invites us to spend a day picnicking with the Peazants.
Four generations are gathered to celebrate the family's departure from the island to a new life in the industrial North. There are no formal introductions and so, for the outsider, confusion is inevitable.
Nor is Dash about to sort it out for us. Her own fascination is with "the children of those who chose to survive,” and her approach is more like found poetry than dramatic narrative.
An exploration of her own Gullah (or "Geechee") roots, Daughters of the Dust offers us an impression of "the language, the food, the people, the way they moved and talked." Those of us who are not part of the family are left to infer and intuit for ourselves.
Despite her film's languid pacing, it quickly becomes obvious that there are deep divisions within this apparently matriarchal clan. If Nana is custodian of "the old ways," she must compete with the free-spirited Yellow Mary, who has brought her same-sex lover Tula (Tula Hoosier) to the party. She must contend as well with the quiet fervour of Viola (Cheryl Lynn Bruce), the "modern" Christian, and with the dismissive non-believer, Haagar (Kaycee Moore).
Then, too, there is the crisis between Eli Peazant (Adisa Anderson) and his pregnant wife Eula (Alva Rogers) concerning the paternity of her child. Adding to a viewer's confusion is the fact that Eula's as-yet unborn daughter is the film's narrator (Kai-Lynn Warren).
A visually allusive meditation rather than straight domestic drama, Daughters of the Dust explores family connections that are at once exotic and familiar. It invites us to view it more than once.

Afterword: The first feature-length film directed by an African-American woman to obtain general theatrical release in the U.S., Daughters of the Dust was a critical hit. In a fair world, it should have made Julie Dash, its 38-year-old writer-director welcome in Hollywood. “I pitched to every existing studio out there and every mini-major from A to Z,” she told a New York Times reporter in a 2016 interview. “One agency told me I had no future.” Speaking to Vogue magazine that same year, she attributed her lack of success equally to “racism and gender issues.”
Making the lateral move into television, she built a career directing music videos and TV movies, including the award-winning 2002 The Rosa Parks Story that starred Angela Bassett as the legendary civil rights activist. And her only theatrical feature (to date) continues to receive honours. In November 2019, the BBC posted the results of its poll of 368 “film experts” who ranked Dash’s Daughters of the Dust No. 10 on its list of the 100 greatest films directed by women. Earlier this year, the AV Club website included the picture on its list of the 50 most important American independent movies.