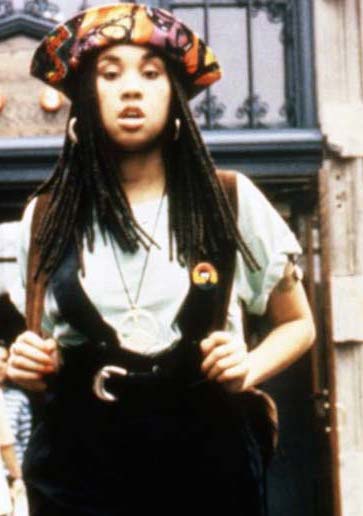 Assertive Chantel Mitchell (Ariyan Johnson) lives by her own rules in Leslie Harris’s 1992 feature Just Another Girl on the I.R.T..


Individual and self-aware, if not likeable


Satisfaction is in short supply as 2020’s Black History Month ends today (February 29). Despite the fact that a leap year gives the celebration an extra day, there are those who complain that the observation is still consigned to the calendar’s shortest month. As it turns out, no slight was intended. Its origins are in Negro History Week, the creation of African-American historian Carter G. Woodson. First marked in 1926, it occurred during the week that includes the birthdays of great emancipator Abraham Lincoln (February 12) and abolition activist Frederick Douglass (February 14). In 1976, when President Gerald Ford declared the first Black History Month, such February milestones as the 1868 birth of black activist W.E.B. DuBois, the 1870 ratification of the 15th amendment (granting African Americans voting rights) and the 1909 founding of the NAACP were also recognized. Where black achievement does appear to be slighted is in the February Academy Awards ceremonies. An issue underscored by the 2015 creation of the hashtag #OscarsSoWhite, lack of diversity among the nominees continues to be a problem for the U.S. film industry’s most extravagant evening of unchecked self-congratulation. In the month that saw the conviction of movie mogul and serial sex offender Harvey Weinstein on rape charges, women and blacks are still seated at the back of Oscar’s bus. Today’s additions to the Reeling Back archive (with links to each following the Afterword to this posting) recall four landmark moments for black women in the movies, including writer-director Leslie Harris’s debut feature, the 1992 urban drama Just Another Girl on the I.R.T..

JUST ANOTHER GIRL ON THE I.R.T. Music supervision by Eric Sadler. Written and Directed by Leslie Harris. Running time: 92 minutes. Rated 14 Years Limited Admission with the B.C. Classifier’s warning: some violence,  occasional very coarse and suggestive language. LESLIE HARRIS DIDN'T just do it.
Her first feature film — Just Another Girl on the I.R.T. — was more than five years from conception to camera. The raw, tough-talking tale of an Interborough Rapid Transit subway-riding "homegirl," it's being sold as the "film Hollywood dared not do."
That's probably because Harris's episodic, street-level screenplay focuses on a non-formula teenager: 17-year-old Chantel Mitchell (Ariyan Johnson). Abrasive and intellectually arrogant, she is an A student at Brooklyn's predominantly black Paul Robeson School for Business and Technology.
"My parents work from paycheque to paycheque,” Chantel tells us, speaking directly to Harris's cinéma vérité camera. "That's not going to be me."
Smart and ambitious, she plans on college and then medical school. Chantel's problem is that she's also an out-of-control smartass.
Determined to live life by her own rules, she "disses" family, friends, teachers and the rest of humanity. A combination of attitude and hormones bring on the predictable crisis.
Midway through the movie, know-it-all Chantel is pregnant by attractive basketball hero Tyrone (Kevin Thigpen). "This ain't my problem," says her teen lover.
Inspired by Spike Lee's 1986 breakthrough feature She's Gotta Have It,  LINK <> Harris set out to make her own movie about a young black woman. Currently being promoted as the first female African-American feature filmmaker, she offers a different perspective on the problems of coming of age in the big city.
Chantel's story provides a needed response to the surprisingly consistent sexism evident in the work of male black directors. She may not be likeable, but she is vividly individual and self-aware.
Too bad we can't always understand her. Too often, Harris's slang-filled dialogue is delivered in the shrill, inner-city conversational style that registers midway between a shriek and a shout.
It's English of the sort that needs subtitles, the kind of amenity that British director Ken Loach provided in his heavily-accented 1991 working-class drama, Riff Raff.
Director Harris's breakthrough picture, Just Another Girl on the I.R.T. is a rare glimpse into a world that needs to be better understood.

Afterword: In a 2018 interview with Leslie Harris, Guardian reporter Kyka Marshell tells us that hers is “a familiar story: a young director heads to the Sundance film festival with their debut feature. The crowd is wowed; jury likewise. The movie gets picked up for a major distribution deal and is deemed an instant classic.” Marshell goes on to name nine males who “converted Park City acclaim into enduring careers, even Oscars, (while) things turned out rather differently for Leslie Harris.” The Cleveland-born filmmaker “was lauded as a game-changer. And then . . . nothing. Twenty-five years on, Harris has yet to make a second movie — just like Julie Dash, another black female director, whose debut film, Daughters of the Dust, LINK <> took top honours at Sundance two years before (in 1991)."
Like Dash, Harris would encounter a wall of indifference to her talent among the Hollywood industry’s decision makers. Theirs was a business model founded on racism and sexism, and there was no serious financial incentive for that to change. In 1971, when a subgenre of urban action films emerged featuring non-white protagonists, Variety used the term “blaxploitation” to describe them, making it clear that they existed to make money, not create jobs for African-American artists. If, some 20 year later, there existed a critical mass of black moviemakers, that was an unintended consequence, not the goal. Shamefully, in Hollywood gender has always trumped race, and their male colleagues viewed Harris and Dash as competition for the few “token” assignments available to blacks in the feature film industry’s boys’ club.
Not eligible for club membership, Harris made a career as a college teacher, recently as a professor at New York University's Tisch School of the Arts. Since 2013, she has been seeking funding for a satirical comedy she calls I Love Cinema, based on the experiences of "a sophisticated and outspoken academic" who becomes involved in a cinema-inspired racial controversy. Overall, some progress has been made since the 2015 emergence of the #OscarsSoWhite movement. UCLA’s 2020 Diversity Report found that both women (51 percent of the U.S. population) and people of colour (40 percent) are doing somewhat better in five key film roles. Women comprised 15.1 percent of film directors, 17.4 percent of writers and 18 percent of studio heads. They also were 44.1 percent of film leads and 40.2 percent of total actors. As for people of colour, they were only 14.4 percent of directors, 13.9 percent of writers, and nine percent of studio heads. They had 27.6 percent of film leads and were 32.7 percent of total actors.