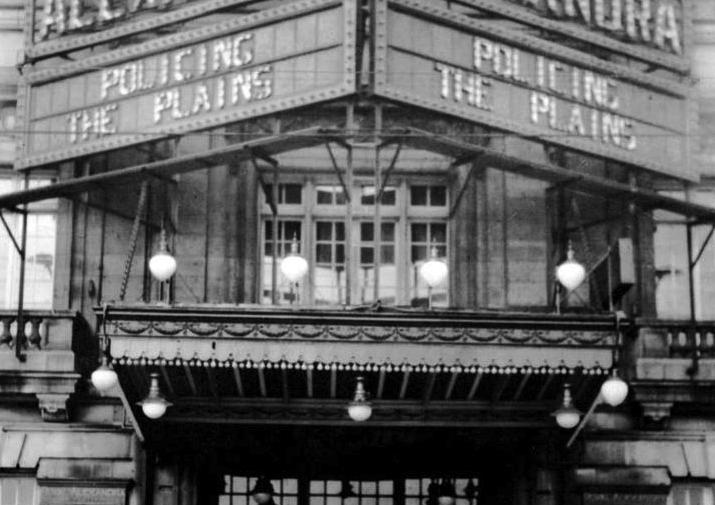 
In Part 2 of an eight-part series, Reeling Back looks at B.C.’s first picture shows and its movie production pioneers. Though not always in agreement, visionaries in both government and the private sector saw the potential for a Filmmaking Industry on Canada’s West Coast.

B.C.s first recorded cinematic enterprise was the exhibition of a U.S. prize-fight film in March, 1897, when Victorians packed the Trilby Music Hall on Broad Street to see Bob Fitzsimmons defeat Jim Corbett.
In October, 1902, Canada's first permanent movie house was opened by an itinerant showman, John Albert Schulberg, who settled in Vancouver to operate the Electric Theatre. Located at 38 Cordova Street, its premiere attraction was the Edison Company’s Mount Pelée in Eruption.
A novelty for audiences, film realized its first commercial value as a promotional medium. To sell its Canadian destinations, the Canadian Pacific Railway became an advertising movie pioneer. It was responsible for the first film shot in B.C. — views of the Rocky Mountains filmed from the front of a CPR locomotive by the American Mutoscope and Biograph Company's Billy Bitzer in 1899.
The railway also commissioned films featuring B.C. scenery from Charles Urban's British-based Warwick Trading Company (1901), and a series of short travel comedies from the U.S. Edison Manufacturing Co. (1910). A CPR-sponsored travelogue was the first colour film shot in B.C. (1911).
In 1908, the Urban company sent James Ferrens to shoot promotional films for B.C.’s provincial government, which was the first in Canada to involve itself directly in movie sponsorship. The government also took note of the film exhibition business. In 1913 it enacted the B.C. Motion Picture Act, and establishing a Board of Censorship of Theatres and Film. A former newspaperman, C.L. Gordon, served as its chief censor.
After 1918, there was a major migration of U.S. filmmakers from the East Coast to California, and this fed hopes in B.C. for a local production industry. In 1917, plans were developed (and abandoned) for commercial film studios in Victoria and Burnaby.
In 1920, following Ottawa's creation of the Exhibits and Publicity Bureau — the world's first government film unit — B.C. set up its own production agency, the B.C. Patriotic and Educational Picture Service (PEPS). Exhibitors protested when Victoria took the politically controversial step of imposing a quota, requiring cinemas to show 15 minutes of PEPS film every day. Although it existed in law until 1970, little funding and less enforcement effectively ended PEPS by 1925.
Coincidentally, the consolidation of Canada's exhibition business in U.S. hands also began in 1920. With the incorporation of Famous Players Canadian Corp. in January, U.S. industry mogul Adolf Zukor created a theatre chain to show the features made by his Famous Players (later Paramount Pictures) production company. In February, 1920, it acquired its first two B.C. cinemas and, by 1926, it had achieved complete market dominance.
The practice of U.S. producers shooting features on B.C. locations began with Universal Film’s The Conflict (1921). B.C.’s first production boom occurred in the East Kootenay when the Americans returned to make The Eternal Struggle, Hearts Aflame and Unseeing Eye (all 1923), The Alaskan (1924), The Winds of Change (1925) and The Flaming Forest (1926), movies that were assured of  theatrical bookings.
There was no such assurance for Canadian producers, as the story of Manitoba-born Arthur David "Cowboy" Kean illustrates. The first British Columbian to be known as a filmmaker, he incorporated Kean's Canada Films in 1915 to produce newsreels but, when theatres refused to book them, he turned to industrial films.
In 1920, he became chief cameraman for PEPS. Returning to private production, he completed Policing the Plains (1927), a feature-length romance paying tribute to the North-West Mounted Police, but was unsuccessful in his efforts to have it distributed. In debt, Kean was forced to leave a film business that was institutionally inhospitable to Canadians.

The above is Part 2 of a eight-part restoration of an Encyclopedia of British Columbia entry written by Michael Walsh, originally published in 2000. For additional information on this archived material, please visit my FAQ.


TIMELINE: 1897-1928
These are the significant events in the history of the B.C. film industry. For those who want to know more, I've included in square brackets at the end of each item a reference to my source for the information. The first one —  [BC-1/1] — guides you to page one of Colin Browne’s Motion Picture Production In British Columbia: 1898-1940, published in 1979. All of the works I consulted in the preparation of this history are listed in Part 8 of the series, the Bibliography. Each has a reference code to identify it in the Timeline listings.