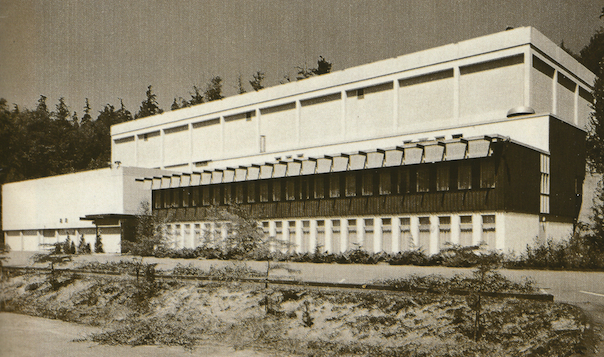 Perched on the side of Hollyburn Mountain, Panorama Studios opened for business in 1962.


In Part 5 of an eight-part series, Reeling Back looks at a new generation of cinema artists and the coming of television, the agents responsible for changes in the direction and development of the B.C. Filmmaking Industry

FILMMAKING INDUSTRY
Prepared for Daniel Francis and Encyclopedia of British Columbia — January, 2000.
[Published in 2000 by Harbour Publishing] By MICHAEL WALSH
[PART 5: FROM TV TO CFDC — 1953-1967]

Television permanently changed the industry's economic and social dynamic. CBUT, the Canadian Broadcasting Corporation's Vancouver station, signed on to the air in December 1953. Its 16mm Film Unit, whose members included Stan Fox, Allan King, Daryl Duke and Ron Kelly, helped shape B.C.’s sense of itself as a creative centre.
CBUT documentaries, such as King's Skidrow (1957), were nationally recognized for their excellence. Cariboo Country, a teleplay first produced in 1958, evolved into a mini-series (1960), then a full series (1963).
By 1962, the CBC was operating six stations in B.C. When the privately-owned CHAN-TV (later BCTV) went on the air in October 1960, its essential competition was border station KVOS. Located in  Bellingham, Washington, KVOS had been on the air since June 1953, and Vancouver was its major market.
To serve its commercial clients, KVOS established offices on Burrard Street. Its film unit, set up in 1960 under Jack Gettles and Vic Spooner, became Canawest Film Productions in 1963. By 1965, its Vancouver animation studio was a major sub-contractor for Hollywood’s Hanna-Barbera in the production of television cartoon series. Canawest incorporated as an independent company in 1967.
The broadcasters brought a sense of new opportunity to the market that was reflected in Lew Parry's decision to build a $100,000 studio in North Vancouver for his Parry Film Productions (1956). When Oldrich Vaclavek founded Panorama Productions Ltd. to make feature films (1956), his initiative resulted in the 1961 construction of Panorama Studios (later Hollyburn Film Studios) in West Vancouver.
In 1958, a year after the creation of the federal Canada Council for the Arts, Al Sens set up B.C.’s first animation studio. The theatrical exhibitions mix was enriched by the founding of the Vancouver International Film Festival (1958-1969) and, in 1962, Odeon Theatres' regional office organized the first Varsity Festival of International Films, a two-week-long foreign-film showcase that ran annually until 1982.
Anticipating regular feature production, Local 891 (motion picture production technicians) of the International Alliance of Theatrical Stage Employees (IATSE) was chartered in 1962, the year Australian-born novelist James Clavell directed Vancouver's first sound-era feature, The Sweet and the Bitter, for Vaclavek's much-restructured Commonwealth Films.
At the University of B.C., where the CBC's Stan Fox had conducted production workshops, the student film society supported one of their own, Larry Kent, in the making of three low-budget features: The Bitter Ash (1963), Sweet Substitute (1964) and When Tomorrow Dies (1965).
The National Film Board,  perhaps recalling that the Vancouver-made Herring Hunt was a 1953 Academy Award nominee, opened its first regional production office in Vancouver (1965).
Founded in 1965, the B.C. Film Industry Association saw renewed hope for B.C. feature filmmaking in the Anglo-Canadian co-production, The Trap (1965); in American director Robert Altman's "discovery" of Vancouver with That Cold Day in the Park (1967); and  the CBC's first made-for-TV movie, Waiting for Caroline (1967).

The above is Part 5 of an eight-part restoration of an Encyclopedia of British Columbia entry written by Michael Walsh originally published in 2000. For additional information on this archived material, please visit my FAQ.


TIMELINE: 1952-1967
These are the significant events in the history of the B.C. film industry. For those who want to know more, Included in square brackets at the end of each item is a reference  to my source for the information. The first one —  [GR/16] — guides you to page 16 of Greg Ryan’s An Examination of Movies and Television in Vancouver, B.C., written in 1977. All of the works I consulted in the preparation of this history, are listed in this posted Bibliography. Each has a reference code to identify it in the Timeline listings.