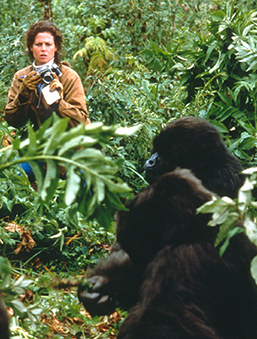 In the Congo, Dian Fossey (Sigourney Weaver) records her first contact with the jungle-dwelling primates in director Michael Apted’s 1988 feature Gorillas in the Mist.


It’s February 12, and a biologist, an anthropologist and a sociologist walk into a bar. The biologist buys a drink, raises his glass and proposes a toast. ”To Charles Darwin on his day!” The anthropologist responds with “to Extraterrestrial Cultures, on their day!” The sociologist forgoes toasting. He just drinks his beer while muttering “every devotee has his day.” And it's true. Since 1995, fans of the 19th-century evolutionary theorist have officially marked the date of his birth as their day to honour science, reason and critical thinking. In the U.K., biologist Richard Dawkins is scheduled to speak today on “The Hubris of Faith,” part of the annual Darwin Day Lecture series. On the same day, first contact enthusiasts will “celebrate all past, present and future alien visitors in ways to enhance relationships among all citizens of the cosmos, known and unknown.” First observed in New Mexico in 2004 — can you say Roswell? — ET Cultch Day now has a worldwide following. Today, in an effort to connect the two groups, Reeling Back is adding two movie reviews to the archive (with links to each following the Afterword to this posting). In keeping with the optimism of our biologist friend’s toast, the popular culture offers the occasional film that honours those who have expanded our understanding of the natural world. Such was the intent of director Michael Apted with his 1988 biographical feature Gorillas in the Mist: The Adventure of Dian Fossey.

GORILLAS IN THE MIST: THE ADVENTURE OF DIAN FOSSEY. Written by Anna Hamilton Phelan. Music by Maurice Jarre. Directed by Michael Apted. Running time: 129 minutes. Rated Mature with the B.C. Classifier’s warning: occasional violence, very coarse language. IN THE JUNGLES OF RWANDA, high on the slopes of an extinct volcano, the lovers are sharing a bath. Luxuriating at one end of the tub ls Dian Fossey (Sigourney Weaver), the driving force behind the Karisoke primate research centre.
At the other end is Bob Campbell (Bryan Brown), the National Geographic Society photographer whose bearers carried the galvanized metal tub up the side of her mountain. Caressing his chest with her foot, she is the first to break the silence.
“Do you think I’m weird?”
“Yes, I do,” he replies. “Absolutely.”
Fossey is, after all, a world-famous eccentric, an American naturalist whose concern for Africa's endangered mountain gorillas brought her to this remote peak six years earlier.
“But,” he adds, attempting to strike a balance, “I also think you are wonderful.”
Striking a balance between weird and wonderful, between documentary artistry and mass entertainment, is Michael Apted’s Gorillas in the Mist: The Adventure of Dian Fossey. Screenwriter Anna Hamilton Phelan organizes Fossey's remarkable story in four straightforward episodes.
Call the first of them ‘Dedication and Discouragement.’ After establishing a camp and a rapport with the notoriously shy creatures, she is expelled from the Congo during its 1966 civil war. “I’m going to go home and buy the sexiest dress I can and marry David,” she tells planter Roz Carr (Julie Harris).
Next comes ‘Dedication and Commitment.’ On the Rwandian side of the border, she re-establishes contact with the gorilla groups and declares personal war on the local native game poachers. “If they want a witch,” she tells her faithful, Christian-educated tracker Sembagare (John Omirah Miluwi), “I’ll give them a witch.”
As in 1985's Out of Africa, the arrival of an empathetic white male results in an interlude of ‘Jungle Love.’ When he moves on, her story enters its ‘Jungle Fever’ phase as Fossey becomes increasingly autocratic and obsessed with her preservationist mission.
A former documentarist, Apted ravishes the eye with location footage of Fossey's gorillas in their natural habitat. Interacting with them and providing his film with a powerful inner fire is Weaver’s award-worthy performance.
The actress conveys not only the intensity of her character's weirdness, but the more elusive wonderfulness that found its best expression among the gorilla groups she championed.

Afterword: Although it did not win any Oscars, director Michael Apted’s biographical drama earned five Academy Award nominations, including one for Sigourney Weaver (best actress) and composer Maurice Jarre (original score).
Dian Fossey’s association with the National Geographic Society was more than a romantic one. Nor is the Washington-based non-profit shy about reminding people that “from the very beginning (it) was a significant partner in Dian’s work — providing grants to support her research activities and featuring her work in multiple National Geographic magazine articles.” In 2007, Weaver narrated the three-hour documentary series Dian Fossey: Secrets in the Mist, broadcast on the National Geographic Channel.
Yes, Dian Fossey was a brunette. Overall though, in the movies, great apes prefer blondes. From 1933's King Kong to Link (1986), the most evolved of our evolutionary cousins have felt an emotional connection with the female of our species. It only seems fair, then, that the field of primatology has reflected something like mutual admiration. According to the Harvard Library’s Resarch Guide to Women in Science: “Many of the most prominent scientists studying non-human primates in the late twentieth and early twenty-first centuries have been women.”
In their 2012 academic paper, Is Primatology an Equal-Opportunity Discipline?, a three-woman research team noted “the enormous interest of the media (in) the work of the three most popular female primatologists (Dian Fossey, Jane Goodall and Biruté Galdikas),” Collectively known as “the Trimates,” Fossey, Goodall and Galdikas are credited with being scientific revolutionaries.
The 1988 feature film Gorillas in the Mist celebrated the life and achievements of the American-born Fossey, who was dedicated to the preservation of their Rwandan habitat. Goodall, born in Britain, gained fame for her work with Tanzanian chimpanzees, and is today recognized as a leader of the global conservation movement. Galdikas, who spent more than a decade in Borneo researching orangutans, is the German-born Canadian featured in the 2011 IMAX documentary Born to Be Wild. She is currently a professor at B.C.’s Simon Fraser University.