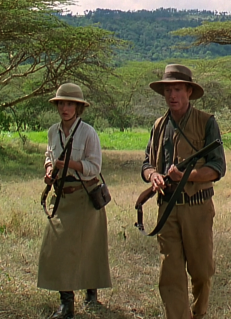 
It all started beneath Kenyan skies, scientists say. Fossils and genetic evidence show that our species, Homo sapiens, evolved in Africa about 200,000 years ago. Characterized by a nettlesome self-awareness (acquired, some suggest, during a "Dawn of Man" moment of contact with an extraterrestrial intelligence), our early ancestors began to leave the old neighbourhood around 100,000 years later. Once established elsewhere and everywhere on the planet, mankind showed an appalling lack of respect for its roots. Colonized by competing European empires until after the Second World War, Africa long was reviled as "the dark continent," its people good for little more than abuse, exploitation and enslavement. For more 50 years, the movies perpetuated such stereotypes as white jungle queens worshipped by savage cannibal tribes, lost cities and safaris led by great white hunters. While racialism is far from a spent force, attitudes are changing. In 2008, the U.S. elected as president Barack Obama, a mixed-race man whose father was a black Kenyan. Obama was working as a community organizer in Chicago the year that a movie introduced us to Danish-born Karen Blixen, who lived and loved in the cradle of humanity for 17 years. Born on this day (April 17) in 1885, Blixen became famous as the author Isak Dinesen. Her 1937 memoir reached the screen as the Oscar-winning feature Out of Africa (1985).

Monday, December 30, 1985.
OUT  OF  AFRICA. Written by Kurt Luedtke, based on the books Out of Africa, Shadows on the Grass and Letters from Africa by Isak Dinesen (Karen Blixen); Isak Dinesen: The Life of a Storyteller by Judith Thurman; and Silence Will Speak by Errol Trzebinski. Music by John Barry. Produced and directed by Sydney Pollack. Running time: 158 minutes. Mature entertainment with the B.C. Classifier's warning: occasional suggestive scenes. SNOW BLANKETS RURAL RUNGSTEDLUND, ancestral home of the Dinesens. In her room, a fiftyish Karen Blixen (Meryl Streep) writes of warmer times and warmer climes.
"l had a farm in Africa . . . '' we hear her think, as she works over the opening words of her autobiographical Out of Africa. In the Danish winter light, the author remembers the men in her life, men who could not have been more unalike.
One is her former husband, Baron Bror Blixen (Klaus Maria Brandauer). Her cousin and a charming Swedish wastrel, he saved her from spinsterhood when they entered into a marriage of increasing inconvenience in British East Africa (now known as Kenya).
The other is her late lover, Denys Finch Hatton (Robert Redford). A kindred spirit and an ecologically-aware Englishman, he was attracted by her abilities as a storyteller and interest in the peoples of the beautiful veldtland where he was a hunter and safari guide.
Going in, I expected little from producer/director Sydney Pollack's sweeping biographical epic. Best known as an urban filmmaker, the TV-trained Pollack's last big outdoors feature was 1972's Jeremiah Johnson, a western as dismal as it was dull.
Then there was the matter of Meryl Streep, my least favourite actress. Having taken no pleasure from her previous 12 screen performances, I hardly expected to be won over on this round.
Coming out, I was surprised to have seen a movie that I liked. As in Pollack's other successful tale of unlikely lovers, The Way We Were (1973), there is an emotional afterglow here that makes experiencing the film all the more pleasing.
As in The Way We Were, the key seems to be Redford. Although the actor has been criticized for not attempting an English accent, his cadences and overall physical carriage leave no doubt about the Finch Hatton character's British background.
What's more, he is the perfect co-star for Streep, providing the talented but usually overly-mannered actress with an easy, natural presence that invites an equally unforced response.      To her credit (and my delight), Streep finds just the right combination of strength, intelligence and fire to bring Karen Dinesen Blixen to life.
To introduce this extraordinary woman to filmgoers, screenwriter Kurt (Absence of Malice) Luedtke presents her true life story as a romance. Pollack, working in the traditionally lush HoIIywood style, turns her Out of Africa into the year's most beautiful love story.

Afterword: I came late to an appreciation of actress Meryl Streep. Going into Out of Aftrica, I was well aware of her three previous Oscar nominations (for 1978's The Deer Hunter, 1981's The French Lieutenant's Woman and 1983's Silkwood) and two wins — Kramer vs Kramer (1980) and Sophie's Choice (1982). Before 1985, though, she made a career appearing in tediously self-important films made by unappealingly "artistic" directors. By contrast, Sidney Pollack (who had made five previous movies with the likeable Robert Redford) had come out of television with a fine sense of proportion in his seriousness. It was one that worked for me, and for the Oscar voters, who presented him with their best picture and director awards. In 1989, Streep starred opposite Roseanne Barr in director Susan Seidelman's flat-out comedy She-Devil, and totally stole the show from the professional comedienne. That did it. I went from cringing at the sight of her name in a credits list, to anticipating what new talent she would reveal next. In 2008, she sang and danced in Mamma Mia! and sang again in 2014's Into the Woods. Now I'm looking forward to her performance as feminist icon Emmeline Pankhurst, in British director Susan Gavron's historical drama Suffragette, scheduled for release in October.

African evolution: That "Dawn of Man" moment mentioned in my introduction is, of course, the opening scene of director Stanley Kubrick's 1968 science-fiction feature 2001: A Space Odyssey. Rather more fun is the game-changing sex scene in director Jean-Jacques Annaud's innovative prehistoric adventure Quest for Fire (1981). An example of the change in attitudes towards Africa in the movies can be seen in the work of director Richard Attenborough. In 1972, he showed us the continent through imperial eyes in Young Winston, his biographical look at Winston Churchill. In 1987's Cry Freedom, his focus is on Stephen Biko, a hero in the fight against apartheid in modern South Aftrica. Encapsulating the confusion about Africa among moviemakers in the postcolonial era was 1984's Sheena, a silly attempt to update the jungle queen genre that was filmed on location in Kenya.