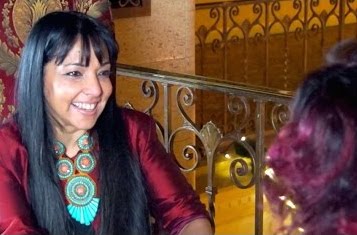 THE WHOLE STORY — To see a complete list of the more than 840 items currently posted to Reeling Back, visit the FULL SITE INDEX. To locate specific names or subjects, type your key word(s) into the Search box (located in the right-hand corner of the nameplate above), and click on the magnifying glass (search) symbol. The archive grows almost daily, so feel free to explore.

From stage to screen


Happy Place, Pamela Mala Sinha’s look into the lives of seven women who have attempted suicide, has its Vancouver premiere tonight (October 20). Last week during a “meet & greet,” the Winnipeg-born actress-playwright talked about her play’s upcoming motion picture adaptation.

The word “community” comes to mind. Happy Place, the play opening this evening at Vancouver’s Firehall Arts Centre, is set in an in-patient centre for women dealing with trauma. Brought together in the hope of recovery, seven very different characters will form a community of purpose during the drama’s two and a half hours.

The “meet & greet” that we attended last Thursday (October 12) certainly was a community event. Organized by Touchstone Theatre, it occurred in the downtown Vancouver public event space known as The Post at 750. It gave us the opportunity to hear Happy Place playwright Pamela Mala Sinha talk about a number of things, including the play’s upcoming adaptation to the screen.

Born in Winnipeg to immigrant parents, Sinha was introduced to us by Surette, and in their interview she told him how her work as an actor-writer is informed by her own experience. Among her current projects is a play that she calls New, a domestic drama set in the community that her parents were part of in 1970s Canada.

She then shared some scenes from that work in progress, performing with actors Zahf Paroo and Munish Sharma in a workshop-style reading from the script. When the evening was opened up to questions, I had to ask about a report that Happy Place was to be made into a movie. Sinha’s answer contained yet one more tale of community, in this case the one that is Canadian theatre.

Before its Toronto stage premiere, she said, Happy Place went though a development process that included workshop readings. Among those who attended a reading was Helen Shaver. The Toronto-based actor-turned-director was impressed, and Shaver optioned the piece for future consideration as a movie.

Following the show’s stage success, Shaver asked Sinha to adapt her script into a screenplay. At the time she was directing episodes of the television hit Orphan Black, and passed along an early draft of Sinha’s screenplay to actress Tatiana Maslany. Like Shaver, Maslany was impressed, and has signed on for the feature version. Filming is scheduled to take place in early 2018 in North Bay, Ontario.

More immediate, of course, is tonight’s opening in Vancouver. And, while the Regina-born Maslany is certainly an acting powerhouse, the local production features seven of our own theatre community’s most talented performers, including Diane Brown, Nicola Cavendish, Sereana Malani, Adele Noronha, Laara Sadiq, Colleen Wheeler and Donna Yamamoto.

As I look forward to seeing both the stage and promised screen version of Happy Place, I’ll continue adding items to the Reeling Back archive. Since my last blog entry, there’ve been 24 new postings, the five most recent among them being:

THE RUSSIA HOUSE — Director Fred Schepisi’s thoughtful adaptation of John le Carré’s 1989 novel was released one year before the 1991 dissolution of the Soviet Union. It stars Sean Connery as a reluctant British agent caught up in the vagaries of superpower spycraft. (Posted October 19)

LA FLORIDA — Floribec, the little-known Franco-Canadian enclave on the coast of the Sunshine State, is the site of director George Mihalka’s 1993 comedy, the story of a Montreal snowbird family’s domestic difficulties in realizing its American dream. (Posted October 17).

WEIRD SCIENCE — Although it seemed in bad taste at the time, writer-director John Hughes’s hormone-driven 1985 comedy may actually have been part of a larger social discussion of nerd culture. (Posted October 15)

FRIDAY THE 13TH PART VIII - JASON TAKES MANHATTAN — The 1989 entry in the serial slasher franchise featuring Jason Voorhees, director Rob Heddens’s entry is interesting only in that it was filmed on location in the greater Vancouver area and features a largely local cast. (Posted October 13)

A NIGHTMARE ON ELM STREET 5: THE DREAM CHILD — The 1989 entry in the serial slasher franchise featuring Freddy Krueger, director Stephen Hopkins’s entry works hard to be serious, with a plot that touches on the real-world issue of teen pregnancy. (Posted October 13)