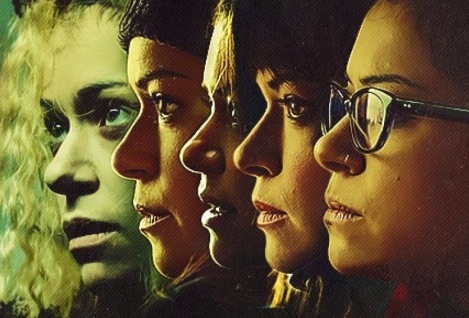 Helena, Sarah, Rachel, Alison and Cosima are among the characters played by the awesome Tatiana Maslany in television's Orphan Black.
THE WHOLE STORY — To see a complete list of the nearly 290 items currently posted to Reeling Back, visit the FULL SITE INDEX. To locate specific names or subjects, type your key word(s) into the Search box (located in the right-hand corner of the nameplate above), and click on the magnifying glass (search) symbol. The archive grows almost daily, so please feel free to explore.

Send in the clones


Were she to turn up in an episode of TV's Supernatural, Dean Winchester's trademark compliment, "awesome," would be an understatement. Celebrating her 29th birthday today (September 22), Tatiana Maslany sets new standards for performance every time she steps before the camera.

She began acting professionally in her teens. Regina-born Tatiana Gabrielle Maslany had more than a decade of television and feature film roles to her credit before the international phenomenon that is Orphan Black.

Granted, the 2013 series has an interesting idea going for it. The Canadian screenwriting team of Graeme Manson and John Fawcett came up with the idea of a world in which human cloning is a reality, and they use it as background for the story of a young woman who discovers that she is the result of a secret scientific project only now coming to light.

The creative team sold the idea to BBC America, which joined with Canada's Space cable network to produce the first 10-episode season. The show opens with streetwise Sarah Manning witnessing the suicide of Metro police detective Beth Childs in a Toronto subway station. Although the women have never met, they appear to be identical twins.

Maslany plays them all. Two weeks ago, when I recalled the career of the multiple-role-playing master Peter Sellers (Being There), I didn't mention Maslany's achievement because, like Sellers, she is unique and deserves her own article.

No one before her has undertaken a sustained narrative based on the interaction of as many distinct dramatic characters. No comedy, Orphan Black is a science-fiction thriller in which our involvement in the story requires Maslany to disappear into each and every one of her roles.

High-tech camera trickery goes only so far. It is Maslany — awesome, amazing, outstanding, pick your superlative — who makes it work. In 2014, a second season of 10 episodes continued the story, adding complications and two more clones to her repertoire. A third season is promised for 2015.

A show that could have been just interesting, Orphan Black has emerged as a must-see sci-fi epic. While waiting for a new season of Maslany magic, I'll continue to add new items to Reeling Back. My ten most recent postings were:

ROB ROY — Though the Scottish independence movement fell short of a majority vote in 2014's historic referendum, it will always have director Michael Caton-Jones's 1995 tale of the MacGregor rebel's historic besting of the English. (Posted September 18)

SHADOW OF THE WOLF — An international cast went to the Northwest Territories to film this 1992 feature, a tale of love and conflict among Inuit attempting to maintain a traditional way of life in the face of white "civilization." (Posted September 16)

PLATOON — Drawing upon his own experience of combat in Vietnam, writer/director Oliver Stone offered filmgoers a devastatingly authentic recollection of the war in his Oscar-winning 1986 feature. (Posted September 15)

SHEENA  — The single attempt to bring the beloved comic-book jungle queen to the movie screen, this seriously silly 1984 feature failed to satisfy her old fans or create any new ones. (Posted September 13)

CRY FREEDOM — In his compelling 1987 historical drama, director Richard Attenborough recalled the 1977 death of Steve Biko, and his importance to the then-ongoing struggle to end apartheid in South Africa. (Posted September 12)

STAR TREK: THE MOTION PICTURE — Ten years after its cancellation, television's Star Trek had become a cult favourite, an entertainment property ready for its big-screen close-up. In 1979, director Robert Wise reunited the original cast for this feature adaptation. (Posted September 10)

BEING THERE — Director Hal Ashby's adaptation of Jerzy Kosinski's slight satirical novella was very much in keeping with the spirit of 1980s America. Peter Sellers's restrained performance earned him a 1980 Academy Award nomination. (Posted September 8)