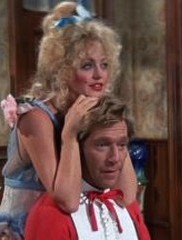 
Less than the sum of its comic parts


Originally a dramatic actor, George Segal apparently decided sometime in the mid-1970s that he’d rather be a funnyman. Born on this day (February 13) in 1934, Segal was in full comic mode in writer-director Melvin Frank's U.S. bicentennial frontier farce The Duchess and the Dirtwater Fox (1976).

THE DUCHESS AND THE DIRTWATER FOX. Co-written by Barry Sandler and Jack Rose. Music by Charles Fox. Co-written, produced and directed by Melvin Frank. Mature entertainment with the B.C. Classifier's warning: some coarse language. ACCORDING TO HIS STUDIO biography, director Melvin Frank was born and raised in Chicago. That may be true but, after seeing his most recent film, The Duchess and the Dirtwater Fox, I couldn't help imagining him to be a Bavarian mad scientist who fled to America to escape the wrath of a torch-bearing mob.
There is a suspicion in the back of my my mind that his real name might be Melvin von Frankenstein. I can picture him dressed in a white lab coat, a fanatical gleam in his eye as he reaches for the outsized switch that will send electrical power surging into a monstrously large projector, a machine designed lo send his latest creation lurching out into an unsuspecting world.
The Duchess and the Dirtwater Fox is stitched-together comedy by the numbers. It is a bits-and-pieces movie that will draw crowds, not for itself, but for the fact that it is a comedy, and that films with upbeat endings are in short supply this season.
Frank, who produced, directed and collaborated on the script, must have seen Robert Altman's McCabe and Mrs. Miller (1971) and liked the basic premise. Both films feature a frontier conman who throws in with a harlot. In each case, the hero is being pursued, while the heroine is determined to better her economic lot.
Frank's film introduces us to quick-tempered Amanda Quaid (Goldie Hawn), a Barbary Coast dancehall singer who supplements her income by turning tricks with the more appreciative members of her audience.
Destined to cross her path is Charlie Malloy (George Segal). An inept gambler and minor Lothario, he's managed to beat an outlaw named Bloodworth (Roy Jenson) and his gang of bank robbers out of their loot.
He’s high-tailing it to Australia by way of of San Francisco.
Amanda aspires to better things. When a prominent Mormon elder (Thayer David) comes to town seeking a governess for the children of his six wives, she detaches Charlie from his boodle, assumes the costume, identity and accent of an English duchess, and gets the job.
With the Bloodworth gang hot on his heels, Charlie chases after her.
Melvin Frank has been around a long time. Originally a radio writer for Bob Hope, he turned out his first film script in 1942 (My Favorite Blonde, co-scripted by Norman Panama). A lot of movies, including a couple of Bob Hope/Bing Crosby Road pictures, have happened since.
The best of them were distinguished by rapid-fire repartee. Such repartee was one of the saving graces in his 1972 hit, A Touch of Class. It is less in evidence here.
The current film plays more to the TV situation-comedy fans. The dialogue is less witty, with Frank relying on a broad burlesque of Western conventions to supply the major laughs. One example:
Malloy, on the run, whistles for Blackjack, his wonder horse. Blackjack positions himself beneath his master's second-storey window. Malloy leaps. And misses.
Frank's pastiche includes a lot of ideas from other movies. When applying for the governess job, Amanda leads the assembled children in a song and dance number reminiscent of The Sound of Music.
Later, while on the run, Amanda and Malloy find themselves in the middle of a traditional Jewish wedding. It's traditional, except for the fact that the rabbi's blessing threatens to trail off into the finale from Oklahoma!
Without a doubt, the movie's biggest plus is Goldie Hawn. A former TV comedienne, Hawn won an Academy Award for her first film performance (in 1969’s Cactus Flower). Since then, in seven subsequent features, she has been fulfilling all the promise that that early Oscar implied.
Opposite her, Segal is as he was in Frank’s A Touch of Class — adequate to the limited demands of a role that practically requires him to be overshadowed by his female co-star. Indeed, here Segal is even overshadowed by his horse, a magnificent performing beast who deserves (but does not get) billing in the opening credits.
Lightweight and overlong, The Duchess and the Dirtwater Fox is a ho-hum comedy. Enlivened by its star power, it’s an undemanding, largely unmemorable night out at the movies.

Afterword: The Duchess and the Dirtwater Fox  was the second of three romantic comedies that George Segal made with Melvin Frank. The first was 1973’s A Touch of Class, a tale of Anglo-American adultery filmed in London. The third was the marital mishap farce Lost and Found (1979), shot in Lake Louise and Toronto. Glenda Jackson, Segal’s co-star in the first and third pictures, is reported to have been offered the role of Amanda Quaid, but turned it down. Goldie Hawn, as noted in the above review, stepped in to make a meal of it.
Arguably, Segal had a more productive creative relationship with the Toronto-born Ted Kotcheff, who directed him in the made-for-TV movie adaptations of The Desperate Hours (1967) and Of Mice and Men (1968). A decade later, they reunited to make a pair of truly inventive big screen comedies, 1977’s Fun with Dick and Jane (in which Jane Fonda played Jane), and Who Is Killing the Great Chefs of Europe? (1978); Today, we tend to remember the New York-born Segal as a comic actor. The truth is that he came to fame in dramatic features.
Following his big-screen debut in a 1961 ensemble piece called The Young Doctors, he was most often seen in a lab coat (The New Interns, 1964) or a military uniform. Segal went from playing an unnamed American Ranger storming the D-Day beaches, in The Longest Day (1962), to the title role in 1965’s King Rat, the intense story of an American corporal who thrives in a Japanese POW camp. Two years later, he earned a supporting actor Oscar nomination for his work in director Mike Nichols's adaptation of the stage play Who’s Afraid of Virginia Woolf?. In 1968, he tried his hand at comedy (in Sidney Lumet’s witty Bye Bye Braverman), and thereafter hardly did anything else. By 1976, his career was hard to distinguish from that of Elliott Gould (with whom he co-starred in Robert Altman’s 1974 gambling addiction comedy California Split).
I would be remiss not to mention his 1974 working visit to Vancouver to star in Russian Roulette, among  his last screen dramas, and a B.C. film landmark. Something of an oddment in Segal’s filmography, the cold-war spy thriller cast him in the role of an RCMP corporal assigned to thwart the assassination of Soviet Premier Alexei Kosygin during a state visit to Canada. Fifteen years later, he’d be back in Vancouver playing an irresponsible married man who impregnates single woman Kirstie Alley in Amy Heckerling’s 1989 romantic comedy Look Who’s Talking. Currently, he is a regular on the ABC-TV sitcom The Goldbergs, where, as Albert “Pops” Solomon, he plays the banjo and dispenses grandfatherly wisdom. George Segal turns 85 today (February 13).