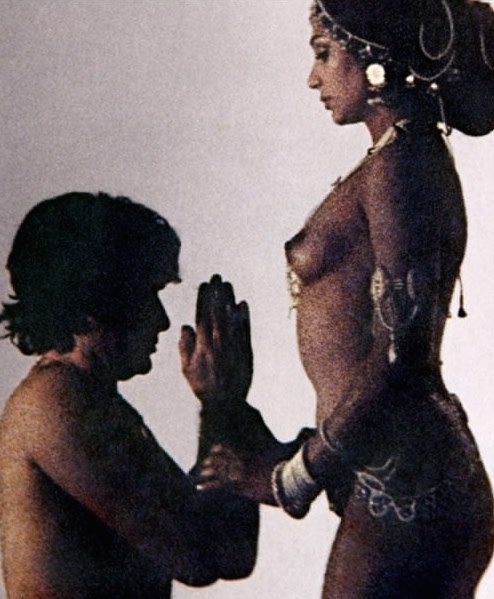 Siddhartha (Shashi Kapoor) learns about love from Kamala (Simi Garewal) in a scene from director Conrad Rooks’s 1972 feature Siddhartha that was the subject of some controversy in India.

In pursuit of happiness


The result of a United Nations resolution passed unanimously in 2012, today (March 20) is the world’s International Day of Happiness. It follows upon the mid-month publication of the UN’s 2018 World Happiness Report in which Finland (not Disneyland) was named the happiest place on earth. Indeed, the Nordic countries — including Norway, Denmark and Iceland — were four of the annual report’s top five. (Canada remains No. 7, while the U.S. ranking dropped from 14th to 18th among 156 nations listed.) Among the famous folk who celebrate March 20 as their own happy day were physicist Albert Einstein, who published his paper on the general theory of relativity on this day in 1915; restaurateur Harland Sanders, who opened his first Kentucky Fried Chicken diner in 1930; dog-musher Libby Riddles, the first woman to win Alaska’s Iditarod Trail Sled Dog Race (1985); and singer-songwriter Peggy Lee, winner of a landmark $3.83 million lawsuit against the Walt Disney Co. (1991). Turning to the movies, it was on this day in 1990 that director Denys Arcand saw his thought-provoking feature Jésus de Montréal sweep the Genie Awards with 12 wins, including best picture. Often seen as the source of individual happiness, spirituality also was the subject of director Conrad Rooks’s less successful 1972 film Siddhartha.

SIDDHARTHA. Based on the 1922 novel by Hermann Hesse. Music by Hemant Kumar. Written, produced and directed by Conrad Rooks. Running time: 89 minutes. General entertainment. INDIA PLAYED A KEY role in development of the film scheduled for Sunday at the [1974] Varsity festival. It provided both the inspiration and the setting.
Siddhartha is an American movie shot on location on the Asian subcontinent. A vacant, reverential transcription of Hermann Hesse's novel, it is the story of a young Brahmin named Siddhartha who spends his life in the pursuit of truth.
According to the German-born author, life on the banks of the Ganges River 2,500 years ago was peaceful and contemplative. For Siddhartha (Shashi Kapoor), it's just too peaceful.
A dutiful son, he begs his father's permission to set off on a quest. The old man (Amrik Singh) doesn't like the idea, but Siddhartha's petulant persistence wins out.
"Go into the forest," his father says with a touch of sarcasm. "If you find truth, come back and tell me about it. Like the river, everything returns.''
Father knows best. In the course of his quest, Siddhartha will join the sadhus, an order of beggar monks, meet the Buddha, then become a successful produce merchant. He learns about love from Kamala (Simi Garewal), the most desired woman in India, and finally  forsakes it all to return to the river as a humble, peace-loving boatman.
Hesse wrote his soulful little yarn in the 1920s. It was published in English in 1951 and "rediscovered" in the 1960s, when Eastern mysticism was all the rage on U.S. college campuses.
Among dewy-eyed coeds of both sexes, it has an honoured place on that shelf reserved for "deep" works. It's right up there with Kahlil Gibran's The Prophet, J.R.R. Tolkien's The Lord of the Rings and Richard Bach's Jonathan Livingston Seagull.
In its movie version, Siddhartha has much in common with the recent [1973] screen incarnation of the Bach book. Both films are visually beautiful beyond belief.
As seen through Swedish cinematographer Sven Nykvist's camera, India is unfailingly Eden-like in appearance. Indeed, were the film to fail at the box-office, director Conrad Rooks would have no trouble selling the movie frame by frame to Bombay [Mumbai]  postcard manufacturers.
It's not likely to fail, though. Rooks has been careful to capture on film the misty visions that are so appealing to the young, the innocent, the sensitive and the tediously sincere. Somehow it seems to matter little to his fans that Siddhartha is an indolent, unfeeling, self-centred lout.
Arrogant and humourless, he is the hero of a philosophical fairy tale that is, despite its popularity, as shallow and witless as Rumplestiltskin. As a film, it is a crashing bore.

Afterword: Spirituality is not an aspect of human experience that translates well to the screen. Filmmakers are more comfortable with more tangible concepts, such as religion and the supernatural — the former the basis for at least a century of movies adapted from  Scripture, the latter most often explored in fantasy or horror films. Spirituality, the inner life of an individual’s spirit (or, if you like, the soul), is less easy to capture in an image, a musical passage or a line of dialogue. Conrad Rooks, an independent director with a single previous feature to his credit, took up the challenge with his ambitious adaptation of the turn-of-the-twentieth-century German writer Hermann Hesse’s Siddhartha.
Rooks, a former drug addict — the story of his withdrawal and rehabilitation is the subject of his only other feature, 1966’s Chappaqua — was in tune with his times. A generation of Americans were tuning in, turning on and dropping out in a hallucinogen-fuelled search for inner truth. Filmmakers such as Roger Corman (The Trip; 1967), Otto Preminger (Skidoo; 1968), Dennis Hopper (Easy Rider; 1969) and Nicolas Roeg (Performance; 1970) stepped up to reflect the experience as they saw it.
Today, with Canada following the states of Alaska, Washington, Oregon and California in legalizing cannabis (and U.S. President Donald Trump apparently declaring a new war on drugs), things are more confused than ever. In 2018, the subject of enhanced consciousness is more likely to prompt a discussion of artificial intelligence (AI) than The Doors of Perception.

See also: Among the biographical features in the Reeling Back archive that focus on the lives of spiritual leaders are: Jesus Christ Superstar (1973); Jésus de Montréal (1989); Mohammad, Messenger of God (1976); and The Ten Commandments (1956).