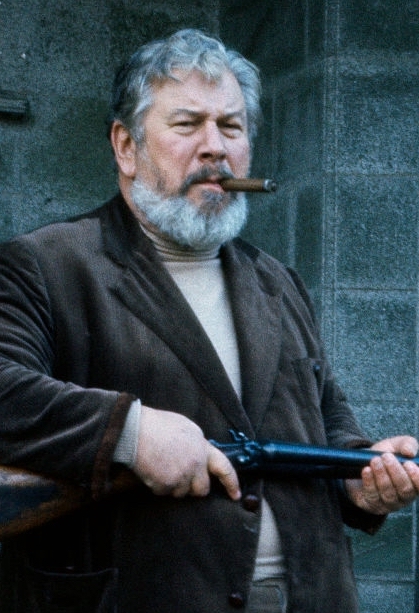 
International cast on an Irish vacation


"Art has to be national to be international,” Peter Ustinov once told a late night chat-show host in Toronto. I heard him say it on this day (November 21) in 1962, and immediately scribbled down the quote, the program’s name (Midnight Zone), and the date. His words struck a chord with my own nascent nationalism and, later, nicely summarized the thinking behind the creation of an annual World Television Day by the United Nations. Marked on November 21 since 1997, it focuses on the broadcast medium’s power to educate, illuminate and promote international understanding. Celebrated as an actor, author, raconteur and humanitarian, the London-born Ustinov was a lifelong internationalist, who promoted his values with insight and wit. Knighted by Her Majesty in 1990, the year he assumed the presidency of the World Federalist Movement, Sir Peter was a welcome presence on stage and screen for some six decades. Today, I’m adding reviews of four of his feature films to my Reeling Back archive (with links to each following the Afterword to this posting), a package that includes Ustinov’s turn as an expatriate father devoted to defending his daughter in director Yves Boisset’s 1977 drama Un Taxi Mauve.

UN TAXI MAUVE (The Purple Taxi). Co-written by Michel Deon. Based on the 1973 novel by Michel Déon. Music by Philippe Sarde. Co-written and directed by Yves Boisset. Running time: 120 minutes. English language version rated Mature entertainment with the B.C. Classifier’s warning: occasional nudity. CHARLOTTE RAMPLING HAS ALL the good lines. As Sharon, in director Yves Boisset’s Un Taxi Mauve (The Purple Taxi), she’s an American heiress, the wife of a German prince and a big sister.
“I taught him everything,” she says of her younger brother. “How to smoke, how to shoplift. How to masturbate.”
Of her marriage she says, “I chose the temporary, and I married the futile.”
Of her brother’s fiancée: “Girls who don’t know what they want are almost as dangerous as those who do . . . and infinitely more boring.”
Sharon is a bitch. She has all the charm of a bleeding ulcer. She’s also the only interesting character in Boisset’s indifferent, piecemeal picture, an international co-production involving French and Italian money, Irish locations and American, English, Italian and French performers.
His story is a jet-set soap opera. Philippe (played by the beagle-like Philippe Noiret), a magazine writer, is in Ireland and under treatment for terminal despair, the result of his son’s death.
Philippe goes shooting with Jerry (Edward Albert Jr.), a wealthy young American, who has come to the ould sod seeking his roots. He wonders about Taubelman (Peter Ustinov), the expansive Russian, who claims that he once met Philippe in Morocco, and whose daughter Anne (Agostina Belli) appears to be mute.
Occasionally, he shares a Guinness at the pub with his doctor, a local leprechaun named Scully (Fred Astaire) who drives the titular taxi.
The arrival of Jerry's sophisticated, uninhibited sister upsets everything. Philippe regains his will to live, Sharon regains her ability to love, Anne regains her speech, and many dark secrets are revealed.
The trouble is, the mix doesn’t gel. Belli, who speaks no English, is obviously dubbed. Ustinov, who speaks it so well, sounds as if he’s auditioning for the Johnny Carson show. Astaire is merely contemptuous of the whole thing.
The idea, of course, was to make a picture that would have sales potential in the international (read American) market. Unfortunately, it looks more like the stars got together and decided that what they really needed was an all-expenses-paid Irish vacation.
They treat Boisset’s script as if it were an afterthought. The performances (with the exception of Rampling, who makes an effective bid for Glenda Jackson’s ice goddess crown) are inconsequential.
But let this be constructive criticism. If M. Boisset edits out all the star turns and splices together what remains, he will have a perfectly lovely short subject on travel in rural Ireland.

Afterword: It was hardly surprising to see internationalist Peter Ustinov in a French-Irish-Italian coproduction. When I found the results disappointing, I suggested that the producers were focused on “sales potential in the international (read American) market.” Rereading that today reminded me of Ustinov’s memorable words from 1962: "Art has to be national to be international."
I wondered just what prompted him to say that, all those years ago on a Toronto television show. Is it possible that he and program host Larry Mann were discussing the then-ongoing efforts to create a Canadian film industry? My scribbled note offers no other details, so we'll never know.
What I do know was that there was a conversation at that time in Canada in a creative community that had been nurtured by local theatre, the National Film Board and a decade of television production. The discussion included the very practical matter of production financing, and whether the domestic market was large enough to support theatrical features. Many argued that “international” distribution should be the ultimate focus of any business plan.
Fast forward to 2020. The good news is that Canadian cities — Vancouver, Montreal and Toronto — are home to three of the five major North American film production centres. The not-so-good news is that those hubs exist largely as branch plants, serving an industry headquartered in Los Angeles. As a consolation prize, a feisty domestic industry persists on the margins, a resistance movement tolerated by the big studios because it poses no serious threat to their profits (and is a useful source of young talent.) How we got here, well, that's a story to inspire a generation of cultural historians. Where we’re going, given the current collision of entertainment distribution technologies, COVID-19 and the climate crisis, is anybody’s guess.