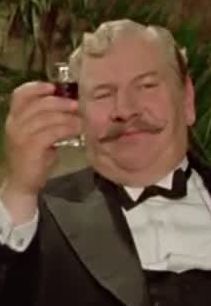 
"Art has to be national to be international,” Peter Ustinov once told a late night chat-show host in Toronto. I heard him say it on this day (November 21) in 1962, and immediately scribbled down the quote, the program’s name (Midnight Zone), and the date. His words struck a chord with my own nascent nationalism and, later, nicely summarized the thinking behind the creation of an annual World Television Day by the United Nations. Marked on November 21 since 1997, it focuses on the broadcast medium’s power to educate, illuminate and promote international understanding. Celebrated as an actor, author, raconteur and humanitarian, the London-born Ustinov was a lifelong internationalist, who promoted his values with insight and wit. Knighted by Her Majesty in 1990, the year he assumed the presidency of the World Federalist Movement, Sir Peter was a welcome presence on stage and screen for some six decades. Today, I’m adding reviews of four of his feature films to my Reeling Back archive (with links to each following the Afterword to this posting), a package that includes Ustinov’s debut as Agatha Christie’s fussy Belgian detective Hercule Poirot, in director John Guillermin’s 1978 feature Death on the Nile.

DEATH ON THE NILE. Written by Anthony Shaffer. Based on the 1937 novel by Agatha Christie. Music by Nino Rota. Directed by John Guillermin. Running time: 140 minutes. Rated Mature entertainment. LINNETT RIDGEWAY DOYLE (LOIS Chiles) is dead. Murdered. And absolutely everybody aboard the luxury cruise ship Karnak is a suspect.
Clues abound, and the famous detective has no doubt that he will soon solve the mystery. But first, he retires to his cabin to “rest the little grey cells.”
Stepping into his ensuite to adjust his moustache, he is confronted by a cobra. The reptile rises slowly from the floor, tongue flicking and hood flaring. The detective returns the creature’s sinister stare, not daring to move from the spot.
Can this be the end of Agatha Christie's most famous creation? Mais non!
"It will take more than a serpent to halt the investigations of Hercule Poirot," the fastidious little Belgian (Peter Ustinov) assures us.
Can this be the beginning of a new prosperity cycle for the depressed British film industry? Producers John Brabourne and Richard Goodwin sure hope so. If Death on the Nile repeats the success of their 1974 film, Murder on the Orient Express, filmgoers could be offered a continuing series of Poirot pictures.
Their working model, quite clearly, is the James Bond series. The first Bond picture, 1962's Dr. No, was somewhat ambiguous in tone.
Audiences accepted it as great fun, and so the second picture, 1963’s From Russia with Love, adopted the now familiar self-mocking formula.
Murder, a loving, lavish re-creation of the 1930s style, introduced Poirot as an exercise in elegant nostalgia. It was a picture that carefully moulded a mood, while giving screen time to a series of deliciously overblown star turns from its big-name cast.
Death, a more ponderous picture, confirms the new formula. If audiences want long, languid, self-consciously comic mystery movies done up in period, that’s what they’ll get.
The result is a film made more to be admired than enjoyed.
Most admirable is Anthony Shaffer's well-crafted script. In adapting Christie's 1937 novel to the screen, the author of Sleuth has given each of the players the opportunity to display both wit and style.
“Do not allow evil to enter your heart, " Poirot warns the jilted Jacqueline de Bellefort (Mia Farrow), with an almost fatherly concern. "It will make a home there."
"If love cannot live there, evil will do just as well,” says the petulant young woman, who will soon be a prime suspect in a murder.
The victim, said to be the richest woman in the world, married Simon Doyle (Simon MacCorkindale), Jackie's one-time fiancé. Their honeymoon becomes a murder mystery when the bride’s body is discovered in her cruise ship cabin.
Among the other suspects are her embezzling lawyer Andrew Pennington (George Kennedy), her resentful maid Louise Bourget (Jane Birkin), Dr. Bessner (Jack Warden), a Swiss physician whose business she has endangered, Rosalie Otterbourne (Olivia Hussey), whose mother's reputation is at stake, and David Ferguson (Jon Finch) a passionate young Marxist who just hates rich folks.
Chewing the carpet most shamelessly are Angela Lansbury, as the florid novelist Salome Otterbourne, Bette Davis, as Mrs. Van Schuyler, an ageing jewel thief intent on filching the Ridgeway pearls, and Maggie Smith, as Van Schuyler's sneering travelling companion Miss Bowers. ("If there are two things in this world I can’t abide, it's heat and heathens.")
A director, faced with that many stars on a single set, must either exercise iron discipline, or take what he can get. John Guillermin just moved out of the way, opting for simple crowd control.
Indeed, it is Peter Ustinov, stepping into a role most recently played by Albert Finney, who sets the tone. His Poirot is surprisingly superficial. A consciously comic figure, he is the sly "foreigner” operating among smugly superior Englishmen. ("I do wish you’d speak some known language,” his investigative partner, David Niven’s very British Colonel Rice, tells him.)
Called "a perfectly foul French upstart," he gently corrects the lady.
"Belgian upstart, madame." It is as if Ustinov looks upon Poirot as a genteel version of Peter Sellers’s overdone Inspector Clouseau. The results are palatable only because Ustinov has a personal warmth that Sellers lacks.
Personal warmth, bravura performances and witty lines fail to hide the fact that, at nearly two-and-a-half hours, Death on the Nile is just too long. Before it's over, "whodunnit?" becomes "who cares?”

Afterword: As noted in the above review, Death on the Nile was Peter Ustinov’s first outing as Poirot. It was a role he would make his own in two more features (1982’s Evil Under the Sun LINK <***> and Appointment with Death in 1988) and three made-for-TV movies (1985’s Thirteen at Dinner, then Dead Man’s Folly and Murder in Three Acts, both 1986). But then the world moved on. Today, the popular culture’s best-known Poirot portrayer is arguably David Suchet. Between 1989 and 2013, Sir Dave starred in all 70 episodes of the 13-season Agatha Christie's Poirot. The British TV series is said to have adapted every major literary work by the author that featured the character.
As for Ustinov, Poirot was not the only ethnic detective he would play. In 1981, he had the title role in director Clive Donner’s Charlie Chan and the Curse of the Dragon Queen. A critical and financial bomb, it marked the final appearance of the Chan character in the movies. At the risk of going off on a tangent, I can’t help but recall pre-Second World War Hollywood’s delight in such casually racist exotica as ethnic detectives, and in particular the screen career of American novelist Earl Derr Biggers’s Honolulu-based Chinese cop, Charlie Chan. Between 1931 and 1949, there was a series of 44 B-budget features in which three white American actors — Warner Oland, Sidney Toler and Roland Winters — played Chan. In 1971, Daryl Duke directed the first attempt to revive the character. The decidedly non-Asian Ross Martin starred in The Return of Charlie Chan, a TV movie memorable only for the fact that it was shot on Vancouver locations.