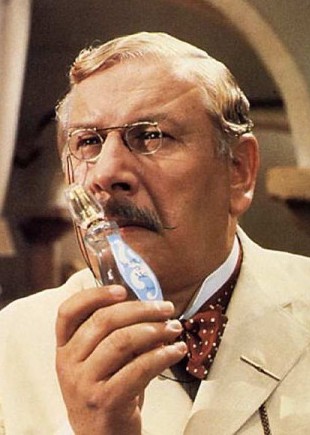 Hercule Poirot (Peter Ustinov) sniffs out the identity of a murderer in director Guy Hamilton’s 1982 mystery Evil Under the Sun.

Another spot of murder


As sophisticated as a Cole Porter tune


"Art has to be national to be international,” Peter Ustinov once told a late night chat-show host in Toronto. I heard him say it on this day (November 21) in 1962, and immediately scribbled down the quote, the program’s name (Midnight Zone), and the date. His words struck a chord with my own nascent nationalism and, later, nicely summarized the thinking behind the creation of an annual World Television Day by the United Nations. Marked on November 21 since 1997, it focuses on the broadcast medium’s power to educate, illuminate and promote international understanding. Celebrated as an actor, author, raconteur and humanitarian, the London-born Ustinov was a lifelong internationalist, who promoted his values with insight and wit. Knighted by Her Majesty in 1990, the year he assumed the presidency of the World Federalist Movement, Sir Peter was a welcome presence on stage and screen for some six decades. Today, I’m adding reviews of four of his feature films to my Reeling Back archive (with links to each following the Afterword to this posting), a package that includes Ustinov’s second appearance as Agatha Christie’s well-travelled Belgian detective Hercule Poirot, in director Guy Hamilton’s 1982 feature Evil Under the Sun.

EVIL UNDER THE SUN. Written by Anthony Shaffer. Based on the 1941 novel by Agatha Christie. Arrangement of Cole Porter’s music by John Dalby. Directed by Guy Hamilton. Running time: 117 minutes. General Rated General with the the B.C. Classifier’s warning: "occasional swearing." HOW EMBARRASSING. THERE’S A body on the beach.
A dead one.
Its presence, unmistakable evidence of Evil under the Sun, is particularly annoying to the island resort's owner, Miss Daphne Castle (Maggie Smith). Fortunately, one of her registered guests is the famous detective Hercule Poirot (Peter Ustinov).
Taking the fussy little Belgian aside, she asks him to conduct an investigation and to conclude it quickly. "You know how people can be about a spot of murder," she says.
Ah, yes, murder most marvelous. For more than half a century, Dame Agatha Christie was able to make a killing out of killing.
Nothing uncivilized, you understand. A proper, well-bred Englishwoman, Dame Agatha took no delight in violence for its own sake. The key to her world was and is order.
Dame Agatha wrote mysteries. Readers are invited to match wits with the author in an attempt to puzzle out the identity of the perpetrator before the detective-hero. It is a game of logical deduction.
Logically, a film series based on the Christie canon – her world sales exceed 300 million – should have no difficulty finding an audience. Fortunately for filmgoers, producers John Brabourne and Richard Goodwin haven't relied on logic alone.
Order of a different order is necessary if Christie's magic is to work on the theatre screen. A movie, unlike a book, can not be contemplated slowly, set aside momentarily or rechecked for a clue that may have slipped by in the last chapter.
Movie mysteries must offer more than just a puzzle. The Brabourne/Goodwin team rightly reasoned that readers who delight in clues would be filmgoers attuned to ambience.
A pattern was set in their first effort, 1974's Murder on the Orient Express. Set in period, the picture meticulously reconstructed the ordered world of first class European train travel circa 1935.
To play the many suspects, the producers hired a platoon of capable name performers. With a literate script to put the proper words in their mouths, and music crafted to sustain the mood, the Express puffed on to boxoffice success by offering audiences an evening of delicious escapism.
In their second film, 1978's Death on the Nile, Ustinov replaced Albert Finney as  detective Poirot. Played rather too broadly, the picture’s efforts at self-parody were too obvious for comfort.
Their 1980 offering was a Miss Marple opus; The Mirror Crack’d showed that director Guy (Goldfinger) Hamilton knew how to fine tune the formula. Hamilton was then given the job of bringing back Ustinov as Poirot in Evil under the Sun, a well-wrought item that should keep the series chugging along nicely.
The setting is a remote Mediterranean island, circa 1938. Daphne Castle, ex-showgirl and former courtesan to a king, has a small palace to show for her royal liaison. She has turned it into an exclusive hotel catering to the very well-to-do.
Daphne's guest list this week includes old friend and rival Arlena Marshall (Diana Rigg), Arlena's wealthy husband Kenneth (Denis Quilley) and his daughter Linda (Emily Hone). Arlena is the centre of attention.
Broadway producers Odell and Myra Gardener (James Mason and Sylvia Miles) are after Arlena to star in their new show. Gossip columnist Rex Brewster (Roddy McDowall) needs her imprimatur on his new book.
Arlena’s former paramour, Sir Horace Blatt (Colin Blakely) wants an expensive diamond  back. Her current paramour is a young man named Patrick Redfern (Nicholas Clay), whose young wife Christine (Jane Birkin) would like her husband back.
Guess who ends up the body on the beach?
Count on Anthony (Sleuth) Shaffer to pen a screenplay full of sharp, character-rich exchanges. Sample dialogue:
"Linda, darling," gushes Rex Brewster upon meeting Arlena’s teen-aged stepdaughter. "How is your lovely mother?"
"She's not lovely, and she's not my mother."
"Didn’t anyone tell you that peevishness is not becoming to a young lady?"
"No. But they did tell me not to talk to very strange men."
Here is a case where everything, including Anthony Powell's imaginative costuming, contributes to the effect. The music is, of course, by Cole Porter (as arranged by John Dalby).

Afterword: Evil Under the Sun was the third feature to pair Peter Ustinov and Maggie Smith. That fact gives me the opportunity to recall my favourite of Ustinov's films: 1968’s Hot Millions, a British-American co-production that I never formally reviewed. Directed by the Toronto-based Eric Till, it is a beguiling combination of low-key thriller and romantic comedy, the movie that first introduced the idea of cyber crime to the popular culture. Ustinov, who co-wrote the screenplay, stars as a con-man who poses as a computer expert to gain access to the electronic brain that controls the finances of a London-based multinational corporation.
What made the movie an immediate delight was the skill with which it skewered its many timely satirical targets. Coming along in a year of historic turmoil, it offered cheeky commentary on the results of Britain deeding over its empire to the U.S. at the end of the Second World War, on the American dependence on their cool new technologies and on the unintended consequences of it all in the larger world.
What makes it memorable to this day is the relationship developed between Ustinov’s character, Marcus Pendleton, and that of his co-star Maggie Smith. As Patty Terwilliger, she is the beguilingly inept neighbour he meets and marries as the caper unfolds. In a departure from Hollywood rom-com norms, our lovers are not beautiful youngsters. In keeping with the “kitchen sink” movement in post-war British culture, they are mature working folk, coping as best they can with rapid change. Their love story gives it the heart that is a delight to this day. Of Sir Peter’s 100-plus screen credits, Hot Millions is for me the one that best embodies the humanity of one very special man.