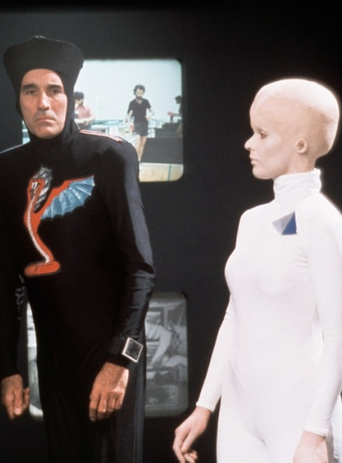 
VCON 41, opening today (September 30) in Surrey, B.C., has as its chairman R. Graeme Cameron, a life-long fan whose knowledge of really bad science fiction films is second to none. Among his favourites is director Ed Hunt’s 1977 Canadian cheesefest, Starship Invasions.

STARSHIP INVASIONS. Music by Gil Mellé. Written, produced and directed by Ed Hunt. Running time: 89 minutes. Mature entertainment. HEAVEN HELP US, THE Earth is in danger again! The notorious Legion of the Winged Serpent, frontmen for a dying planet in Alpha Orion, have decided that this would be the ideal neighbourhood in which to relocate.
The fact that the place is already overpopulated poses no problem for the black-clad Legionnaires. They have a machine that issues hypnotic orders that no human mind can resist.
All they have to do is dial “suicide,” and our race will self-destruct like so many lemmings.
The only thing that can keep the Legion from having its way with old Mother Earth is the League of Races, a federation of good-guy planets that has maintained a secret, sub-oceanic base here for about 4,000 years.
According to a League spokesman, “the earth and its inhabitants are protected by  the Galactic Treaty.”
Writer-director Ed Hunt displays a fondness for Saturday matinee space opera. In Starship Invasions, he’s come up with a plot that might have thrilled subteen audiences 25 years ago [1953]. Given similar material, a director like George (Star Wars) Lucas was able to create an entertainment landmark.
Hunt, unfortunately, had neither the money nor the inspiration to do much more than reconstruct a moment out of Hollywood’s pulp-fiction past.
His chief villain is the redoubtable Christopher Lee, here cast as an evil saucerman name Rameses. Together with his hulking henchmen, he enters the League’s submarine base intent on breaking that ages-old treaty.
Intent on foiling his foul plan are Anaxi (Daniel Pilon, actor Donald’s lesser known brother) and Phi (a bald, body-stockinged Tiiu Leek), sole survivors of Rameses's unprovoked attack. They enlist the aid of earth scientist Alan Duncan (Robert Vaughn), an outspoken UFO expert, and his friend Malcolm (Henry Ramer), a computer technician equally outspoken in his opinion that there just ain’t no such things.
It’s hard to know whether to cheer Hunt or jeer him. Compared to such classy items  as Star Wars, his Starship Invasions is hopelessly out of date, ponderous and painfully naive.
Hunt’s aliens are a grim, uncomfortable-looking lot who spend most of their time standing about with their arms folded. The fact that they’re all telepathic —their faces remain immobile while their “thoughts” are heard on the soundtrack — does nothing to improve the generally static quality of the performances.
His ideas, on the other hand, are cheerfully inventive. Rameses’s discovery that his own race has descended from earthly parents adds an unexpected Oedipal touch to his bloody-minded plot.
Duncan, the saucer-obsessed astronomer, seems to be a deliberate take-off on Allen Hynek, the publicity-savvy technical advisor to Close Encounters of the Third Kind director Steven Spielberg.
Judged by the standards of most make-do movies, Hunt has done reasonably well. In Karen Bromley, he had the services of an art director able to create suitably unearthly alien   environments out of very little.
Even more impressive is the work of special effects director Warren Keillor. His flying saucers, undersea base operations and outer space battles manage to maintain the back-lot standards of the 1950s. A scene in which a saucer crashes into Toronto’s Bank of Montreal skyscraper is a real prize-winner.
Silly but sincere, Starship Invasions takes us back to the shoestring budget days of yesteryear. Can the new adventures of Flash Gordon be far behind?

Afterword: As it turned out, a new Flash Gordon feature arrived in 1980. Made on a budget 20 times larger than Starship Invasions $1 million, it starred Sam J. Jones as the intrepid Flash, Edmonton-born Melody Anderson as Dale Arden and Max von Sydow as Ming the Merciless.
Like the Louisiana-born Bob Clark, Ed Hunt was an American who came to Canada in the early 1970s to make movies. During his decade-long visit to Toronto, Clark directed seven feature films — among them Black Christmas (1974), Porky’s (1981) and A Christmas Story (1983) — that would make an indelible mark on Canadian cinema. Hunt’s contributions, six features in six years, were less memorable. He made his directorial debut in 1973 with a sex-exploitation film called Pleasure Palace (later retitled Corrupted), following that with a true Ontario oddity, Diary of a Sinner (1974).
In 1976, Hunt switched genres, writing, producing and directing Point of No Return, a mad scientist science-fiction thriller in which he first incorporated his own interest in unidentified flying objects (UFOs) into the plot. Then came Starship Invasions, his most ambitious and best-known film. As noted above, the 1977 feature benefited from the talents of Karen Bromley, who’d made her art directing debut on Bill Fruet’s 1972 Canadian classic Wedding in White, and Warren Keillor, whose first special-effects credit was for Daniel Petrie’s not-so-classic 1973 feature, The Neptune Factor. Bromley and Keillor first worked together on Bob Clark’s 1974 Black Christmas.
Hunt ended the decade with two features released in 1979. Plague, the story of a genetic engineering accident that results in a worldwide epidemic, was retitled M-3: The Gemini Strain to take advantage of Kate Reid’s presence in a starring role. (Reid, at the time, was famous for playing the take-charge Dr.Ruth Leavitt in director Robert Wise’s 1971 sci-fi hit The Andromeda Strain.) Finally, there was his 89-minute documentary feature UFO’s Are Real [sic], sometimes screened as Flying Saucers Are Real!  Ed Hunt returned to the U.S. in 1980.