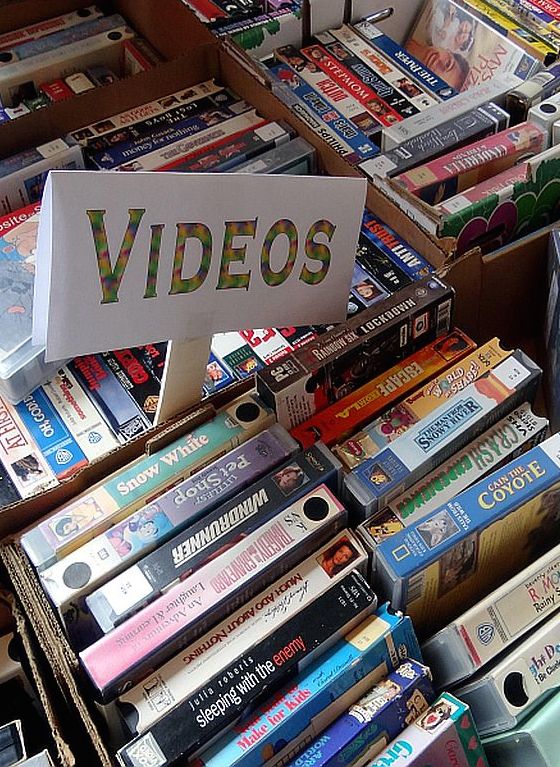 Who knew that one day video cassette tapes would be the subject of nostalgia, not unlike "Hollywood's Greatest Year," 1939?

More than a good year


Looking forward to the best memories


Today (July 4) Turner Classic Movies is celebrating the 80th Anniversary of what it calls “Hollywood’s Greatest Year.” I had some fun with the same subject on its 50th anniversary, writing a tongue-in-cheek feature on home video in an alternative reality 1939.

AMAZING, ISN'T IT, HOW much junk accumulates in the back of a car? Why, just yesterday, Doc Brown and I were cleaning out the DeLorean and what should we find but a Province PreView section dated Friday, December 22, 1939.
Since, to the best of my knowledge, we weren't publishing PreView 50 years ago today [1989], I quickly snatched it from the pile of random rubbish that Doc was feeding into the Mr. Fusion.
"Picked that up on a trip forward from the past," Doc said. "I was following an alternate reality in which the Sony Corporation was founded in 1908 by a kid from Poughkeepsie. By the mid-1930s, almost everybody in America owns a domestically-built VCR.
"Read the article on video," Doc told me. "You know how 1939 was really a great year for movies? Well, that meant that 1940 was going to be something else for the home video devotees."

HOLLYWOOD — It may be an ill wind that blows no good, but hardly anybody in the home-video industry has a good word for the Selznick Entertainment Group's plan to market a bargain priced Gone With the Wind.
Yesterday, less than a week after the blockbuster film's triumphant premiere in Atlanta, SEG chairman David O. Selznick stunned everyone by promising "the world's greatest love story for Valentine's Day."
Selznick Home Video has committed to a February 14, 1940, release date for its Gone With the Wind video cassette. The suggested list price — an unprecedented $9.99 — is expected to generate record sales.
Such rapid sell-through to the consumer will seriously affect the rental market, say video retailers. In addition, Selznick's pricing policy increases the pressure on other producers to adjust their standard prices. (Warners' 1938 hit The Adventures of Robin Hood, released to video just six weeks ago, lists for $29.95.)
(Selznick, of course, is no stranger to controversy. Two years ago, Louis B. Mayers's maverick son-in-law acquired the prestigeous D.W. Griffith film library. Last year, he was vilified for releasing a colourized version of The Birth of a Nation.)
Public reaction to the Selznick initiatives could have a profound effect on the entire home-video business. We know that the pictures produced for theatres this year will be available on cassette in the next few months. What's not clear is whether we'll want to rent or buy them.

OSCAR WATCH: Competition will be keen for the 1939 Academy Awards. That's the word from the East where the New York Film Critics Circle, our best Oscars-race bellwether, cast 14 ballots before reaching agreement on a best picture.
The Circle finally chose Wuthering Heights. Director William Wyler's adaptation of the classic gothic romance, it stars Merle Oberon and Britain's Laurence Olivier as the lovers.
The runners-up, and sure contenders for Oscar honours, were Gone With the Wind and Frank Capra's Mr. Smith Goes to Washington.
James Stewart, who plays dedicated senator Jefferson Smith in Capra's populist drama, was voted best actor. Also in the running were Robert Donat, as the kindly teacher Charles Chipping in Sam Wood's Goodbye Mr. Chips, and Henry Fonda, playing the title role in John Ford's Young Mr. Lincoln.
Vivien Leigh, Gone With the Wind's Scarlett O'Hara, won the best actress award. She beat out Greta Garbo who, as Soviet envoy Lena Yakushova, demonstrated her ability to laugh in Ernst Lubitsch's comedy Ninotchka.
The best direction prize went to the redoubtable John Ford for his work on Stagecoach. Lubitsch (Ninotchka) and Victor Fleming (Gone With the Wind) were the also-rans.
For those marking thier calendars, the Oscars will be given out following a banquet at the Ambassador Hotel's Coconut Grove in Los Angeles on the evening of February 29, 1940.

COMING SOON: Hollywood really has outdone itself. There'll be new stock in all sections of your local video store in the New Year.
Action-Adventure — Cary Grant, Douglas Fairbanks, Jr., and Victor McLaglen have great fun serving king and country in George Stevens's Kiplingesque romp Gunga Din. Grant is more serious playing a South American mail pilot in Howard Hawks's tense Only Angels Have Wings.
Basil Rathbone and Nigel Bruce are a fine new Sherlock Holmes and Dr. Watson in Sidney Lanfield's atmospheric The Hound of the Baskervilles. James Cagney and Humphrey Bogart profit from Prohibition in Raoul Walsh's violent The Roaring Twenties.
Biographical — Don Ameche invents the telephone in Alexander Graham Bell. Paul Muni brings freedom to Mexico in Juarez. Bette Davis and Errol Flynn display royal passions in The Private Lives of Elizabeth and Essex. Spencer Tracy tracks down Sir Cedric Hardwicke in Stanley and Livingston.
Children's — Shirley Temple brings her special sparkle to two films with English accents, The Little Princess and Susannah of the Mounties. Mickey Rooney plays Mark Twain's all-American boy in Huckleberry Finn.
Following Walt (Snow White and the Seven Dwarfs) Disney's lead, the Popeye-producing Fleischer brothers are offering the world's second feature-length cartoon, Gulliver's Travels.
Musicals — Mickey Rooney and Judy Garland put on a show in MGM's big screen adaptation of the Broadway hit Babes in Arms. Miss Garland journeys over the rainbow in the Technicolor fantasy The Wizard of Oz. Fred Astaire dances with Ginger Rogers in their eighth feature together, The Story of Vernon and Irene Castle.
Westerns — Although John Ford's Stagecoach, with John Wayne as the fugitive Ringo Kid, is the duster of the year, there is no shortage of fine frontier features riding into the video market in 1940. Ford himself gives us Drums Along the Mohawk, a Revolutionary War drama starring Henry Fonda.
Fonda, as Frank James, also provides solid support for Tyrone Power in the title role of Jesse James. Errol Flynn plays a sheriff during the railroad building boom in Dodge City, while Joel McCrea oversees the transcontinental construction of the Union Pacific in Cecil B. DeMille's extra-length epic.
Big-city tough guys Cagney and Bogart are a long way off their turf in Oklahoma Kid, but Randolph Scott and Cesar Romero get along just fine as Wyatt Earp and Doc Holliday in Frontier Marshal. Difficult to categorize is director George Marshall's terrific western-comedy-musical Destry Rides Again. Marlene Dietrich sings, James Stewart rides and everybody laughs in this story of Tom Destry, a pacifist lawman who refuses to carry a gun.
Remakes — Among the new versions of previously successful movies due soon on the video shelves are Beau Geste, this time with Gary Cooper and Ray Milland starring as the fighting Geste brothers; The Hunchback of Notre Dame, with Charles Laughton as the tormented bellringer; Intermezzo, with Leslie Howard and lovely newcomer Ingrid Bergman as the illicit lovers; and The Three Musketeers in a musical comedy version starring Don Ameche and the Ritz Brothers.

The above is a restored version of a Province feature by Michael Walsh originally published in 1989. For additional information on this archived material, please visit my FAQ.

Afterword: In December 1989, cinema chronicler Ted Sennett published Hollywood’s Golden Year, 1939, a coffee-table book celebrating the output of the American film industry during its most glorious year. It arrived just in time for Christmas gift giving, and its gift to me was the idea for the above holiday feature. Back to the Future Part II was still in the theatres, so I decided I would have some fun with everybody’s favourite time traveller and create an alternate reality in which home video was a part of the 1939 entertainment mix.
Remember VHS? Video cassette tapes first arrived in our reality in late 1977, and by 1989 the Video Home System format had taken over the world. Who knew that in 1997 a new format — the DVD (Digital Versatile Disc) — would come along and turn our VCRs into an obsolete technology, and the tapes they played into thrift store detritus? VHS lasted about 20 years and, if today’s streaming services have their way, the DVD is set to follow them into the dark well of sweet memory. When I wrote the above piece, I thought it was all about the incredible variety of movies available to movie fans in one particular year. As it turns out, it was really about visiting the video store at a time when such shops still existed.